The world is moving quickly toward new refrigerants that have lower GWP, and Honeywell wants to be a leader in answering that challenge. The company recently introduced a new refrigerant for commercial and industrial refrigeration that is optimized for supermarkets. And at this year’s AHR Expo, Honeywell executives presented an outlook for what’s next in this area.

Solstice N71 (R-471A) is the newest addition to Honeywell’s Solstice solutions line of low-GWP refrigerants. The refrigerant stands out by being both non-flammable and energy-efficient with a GWP of less than 150. Sunita Rai Singh, Honeywell’s general manager of advanced materials and fluorine products, said both these aspects are very important to customers. 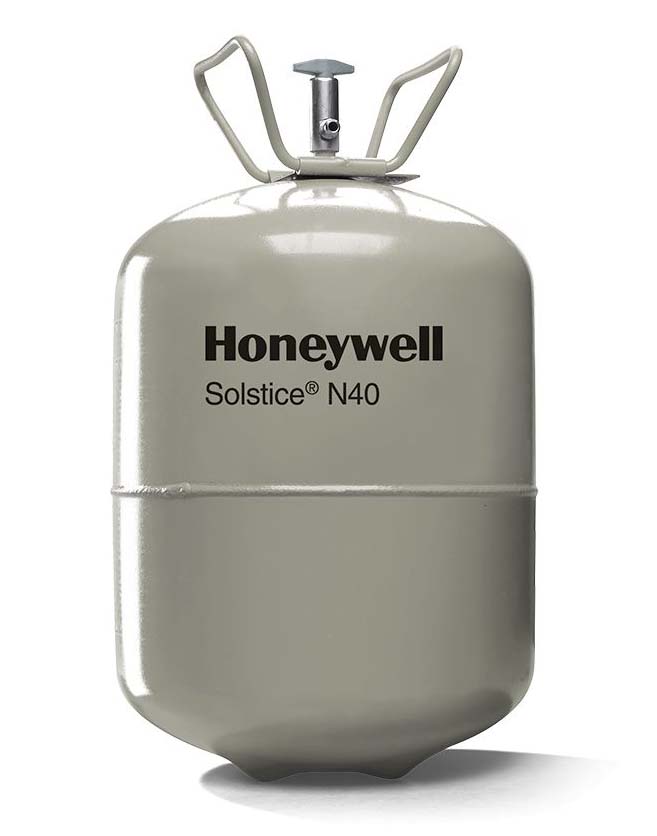 GETTING AROUND: Honeywell promotes that its Solstice line of refrigerants is non-flammable. This makes it easier to store and transport. (Courtesy of Honeywell)

Many of the new refrigerants being introduced to the market are somewhat flammable. Industry experts say the risk of these refrigerants causing a fire is low. Still, Singh said, there are concerns among users. One is the need for extra sensors for even the possibility of a fire. Another is the added costs of special containers and possibly even trucks to transport flammable materials.

“It is always the first choice of customers to deal with nonflammable systems,” Singh said.

The energy efficiency of N71 solves another problem — how to lower emissions from refrigerants without increasing those at the same time by making the systems work harder. Solstice N71 is designed to utilize conventional equipment. Solstice N71 provides substantially stronger energy performance in medium-temperature applications boasting a 13% reduction in energy usage against R-404A and over 30% energy reduction versus CO2-based systems, according to Honeywell modeling.

The move to lower-GWP refrigerants is being hurried along by a combination of regulations and investor demand for improved ESG performance. The California Air Resource Board (CARB) already restricts refrigerants with a GWP greater than 150 in new systems. Solstice N71 meets these requirements. Meanwhile, the U.S. Environmental Protection Agency is considering a similar national regulation that may take effect in 2024.

Since California is a huge market for everything, including supermarkets, CARB’s rule has an effect outside of the state. Other regions of the world are also moving to lower-GWP refrigerants. The European Union has adopted measures similar to those of CARB.

Large retailers are trying to stay ahead of the curve. For example, Walmart announced it will use Honeywell’s Solstice N40 in some stores in Mexico and Central America. The project will cover more than 160 new supermarket refrigeration systems in the region. The use of Solstice will help Walmart reduce its carbon footprint, potentially reducing it by 130,000 metric tons of CO2e.

“They wanted to bring up their standards to what they are doing globally,” Singh said.

Whole Foods already uses N40 in about a fifth of its stores. The refrigerant is also used by supermarket chains in countries such as Indonesia and Vietnam. Singh said many companies have pledged to reduce their carbon footprints, such as Walmart and Whole Foods’ parent Amazon, and their investors are holding them to that. The top executives at Honeywell itself have made a commitment to become carbon neutral in the company’s facilities and operations by 2035.

None of this happens overnight or at a low cost. Developing refrigerants means working on the molecular level. Honeywell invested $1 billion in research, development, and new capacity over the course of a decade for the Solstice technology. It took a lot of testing to measure performance, along with safety and compatibility with HVAC equipment, Singh said. But the effort and expense are paying off with the strong demand from large customers, like Walmart and Whole Foods.