Switching from manual to electronic will require new valves and controls

Replacing manual parts with electronic was the theme at Sanhua’s booth at the AHR Expo.

“Systems are becoming more and more sophisticated, and while yesterday’s systems were mostly mechanical, everything's starting to shift into the electrical realm,” said Michael Smith, director of marketing and communication at Sanhua. “It’s only going to continue. So there will still be a market for the mechanical ball valves, TXVs, those kinds of things. But as systems become more and more sophisticated, they're all going to require electronic sensors and valves and controls. That’s driving a lot of our development.”

One such example on display at the booth was the SEC Superheat Control Kit for installation of Sanhua’s LPF series electric expansion valves, which are designed for use in refrigeration systems.

“This is designed to allow the contractor to replace a TXV in a system with an EEV. It's a faster installation, less tools, and more control,” Smith said. “Basically, it’s converting from a mechanical valve to an electrically controlled one — and these have been very well received in the market.”

Using the Sanhua Superheat Control Kit and a few components on their truck, contractors can replace thousands of TXV variations they encounter. One control kit and five EEVs replace thousands of refrigeration TXVs, with precise superheat control, faster system pull-down, and no gauges. The kit contains a SEC13 EEV controller, a temperature sensor, a pressure transducer, and a 5-wire stator for LPV EEV — providing a contractor the convenience of a suction pressure, suction temperature, and direct superheat readout. 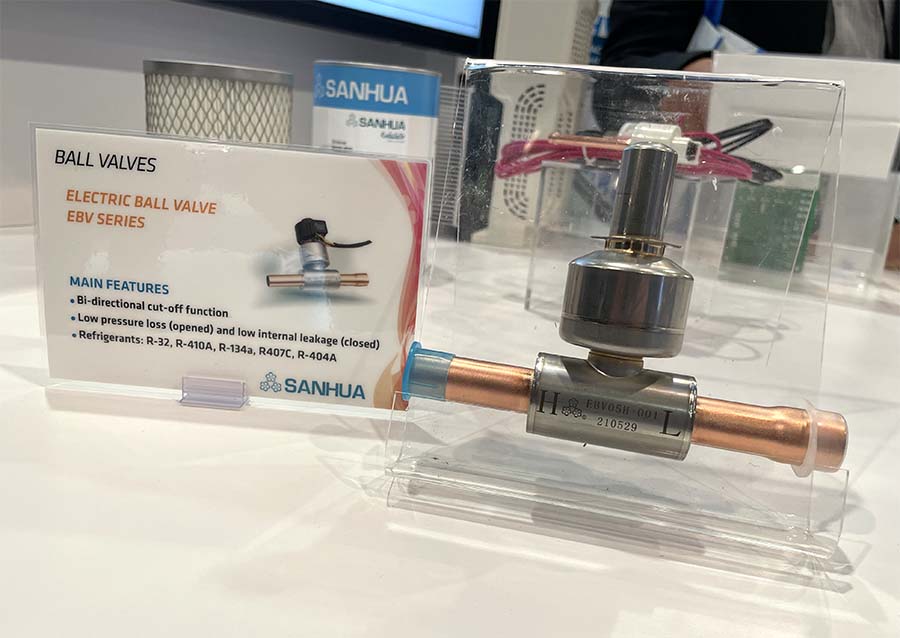 EBV: While a traditional mechanical ball valve must be opened and closed with a tool, the Sanhua electric ball valve runs off of a coil, and a message from the system tells it when to open and close. (Staff photo)

Sanhua’s new products on the OEM side follow a similar trend toward making manual tasks electronic. One of these is their electric ball valve, or EBV.

In a modular unit, it can replace pressure regulators, electronic expansion valves, and solenoid valves to operate as a pressure regulating valve and refrigerant regulation valve. In VRF systems, it can serve as safety valve to cut off refrigerant flow.

Also on display at the booth was the company’s A2L sensor and mitigation board, used to detect leaks in systems that use R32, R454B, and R454C refrigerants. Its design life is 15+ years, and it has an average response time of less than 6 seconds.

“For example, in an R-32 system, this sensor would be mounted so that it would detect a leak, send a signal to the board, and then the board would tell the system shut down,” Smith said.