Attendance came in lower after year off, but industry excited about gathering in person again

A lot of buzz about electrification. Big news about making equipment smaller and more efficient. And the biggest manufacturers all showing off their heat pumps.

That was this year’s AHR Expo. After being shut down last year due to the coronavirus pandemic, the event returned in person to the Las Vegas Convention Center, drawing 30,678 attendees and 1,573 exhibitors. The numbers were down from the high of more than 50,000 attendees and 1,900 exhibitors in Orlando in 2020. A major snowstorm in the Midwest February 2 caused a number of these folks to leave early. Overall, though, the event was deemed a success by both organizers and attendees. 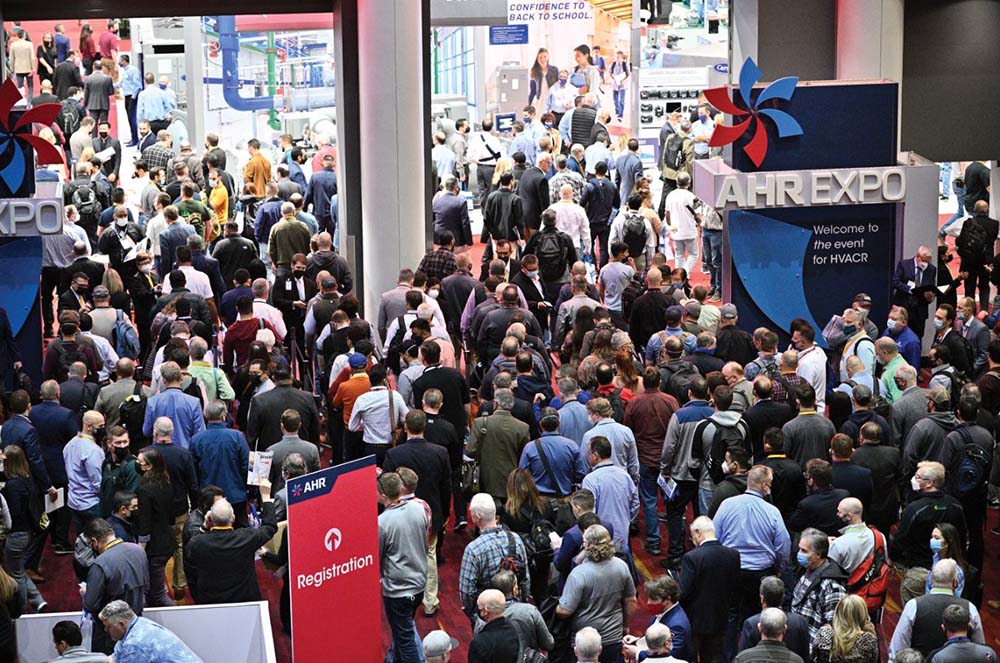 “It was impossible to miss the energy in the halls this year,” said Mark Stevens, show manager. “There have been some heavy ups and downs across the industry in recent years and we, as a community, needed to feel the inspiration that happens when we gather together under one roof.”

This was evident at the booths. Scott McDonough, associate director of product management at Carrier, said the scale of the company’s Aqua Edge 19MD centrifugal chiller drew a lot of attention. The chiller can fit through a double door, following the trend of smaller units that do as much work as their larger predecessors.

“That’s generated a lot of excitement here at the show,” McDonough said.

People were coming up to the chiller at the Carrier booth and touching it, he said. That’s the kind of interaction missing since February 2020, the last time the AHR Expo was live. First-time attendee Brendan Bowie said that’s why he came this time. 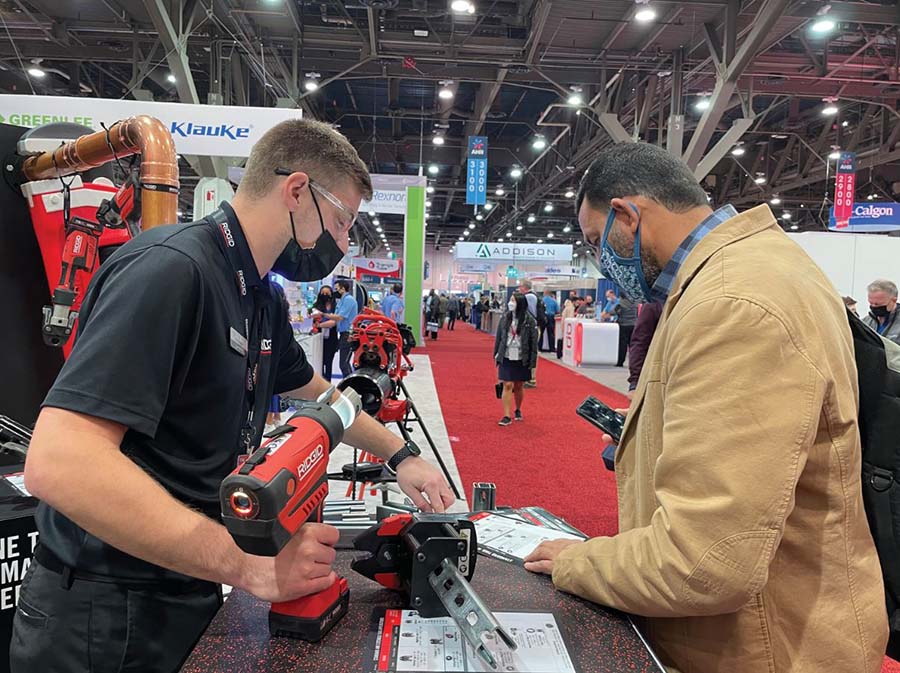 An AHR attendee checks out new offerings at the Ridgid booth on the first day of the Expo. (Staff photo)

“You get to meet all the people who make the things that we buy and look up to and use every day,” Bowie said. “It is a lot of the vendors that we spend money with because they make superior products. I talked to presidents and CEOs of companies that I buy products from every day, every week, every month.”

Virtual events just aren’t the same, he said. Ashley Lynds, another first-time attendee, said a highlight for her was meeting other industry professionals she only knew through social media.

“Everyone was so welcoming, and I was able to network and make additional connections for future business,” Lynds said.

The chance to reconnect was exciting for experience attendees as well. ASHRAE Executive Vice President Jeff Littleton said the opportunity brought together people from all segments of HVAC to learn from each other and new technologies that will help the industry move forward.

“It is absolutely fantastic to see the AHR Expo make such a strong comeback in Las Vegas,” Littleton said.

Still Some Obstacles to Overcome

Of course, not everyone could make it even this year. Travel restrictions and supply chain issues kept some international travelers unable to attend. Stevens hopes that won’t be an issue next year. The 2023 AHR Expo will be held at the Georgia World Congress Center in Atlanta. 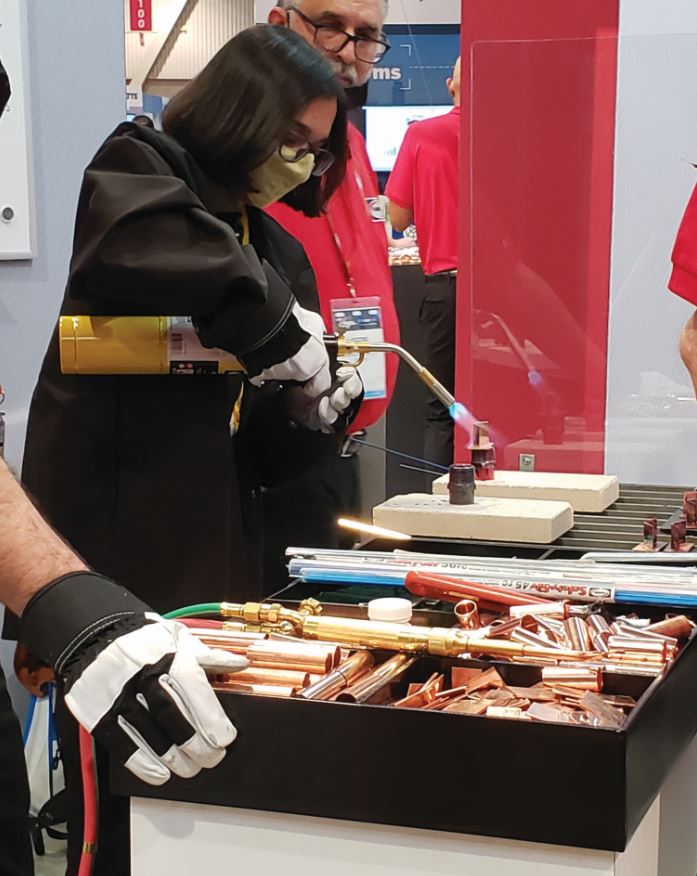 At the Harris Products Group booth, visitors were given the opportunity to practice their brazing skills. (Staff photo) 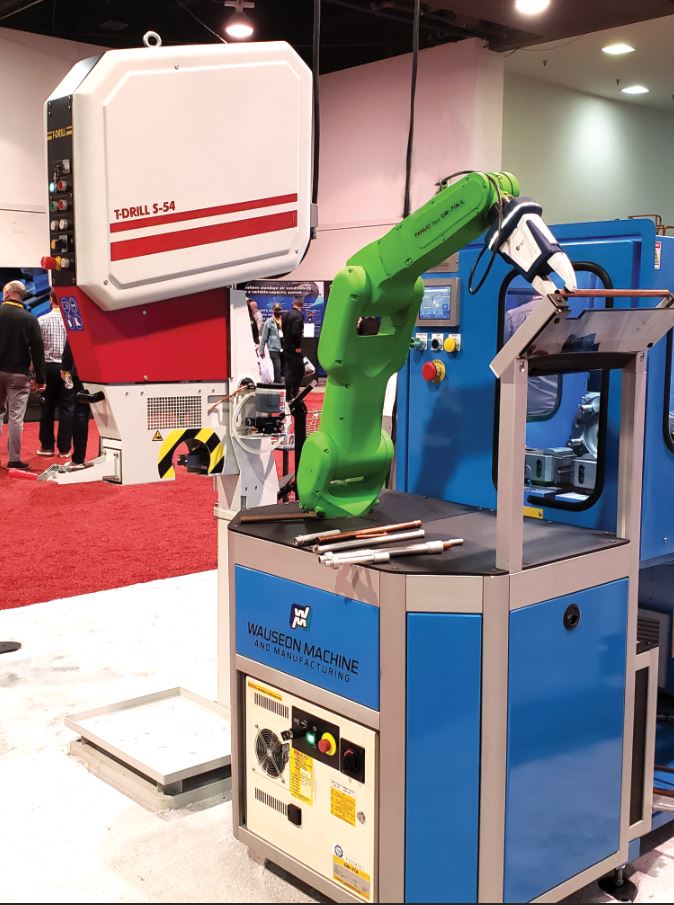 The T-DRILL S-54 collaring machine includes a nifty robotic arm and produces T-outlets for brazed and welded joints, both on straight and bent tubes. (Staff photo)

The last time Atlanta hosted the AHR Expo, in 2019, there were just over 45,000 attendees. Despite this year’s lower numbers, the 2022 show was considered a success. What’s more, Stevens said, it was proof that the HVAC industry is poised to take on anything together.

“We’ve been hosting this show for many years, and while it is always a great showing of our industry, this year felt like a new chapter for HVACR,” he said. “We are a strong community, and we now have the attention this industry deserves to thrive on the global stage.

“We have big problems to solve and hefty aspirations to meet as our industry touches literally every part of society and our everyday lives.”

The AHR Expo was in full swing. Industry professionals reunited at various receptions; the Product of the Year was announced; and industry leaders discussed the current state of the industry.