Cooling towers offer a proven and cost-effective solution for rejecting heat from condenser water and industrial processes. To maximize the operating cost savings, the fill media — the heat transfer surface that the water flows over — must be properly designed and in good condition.

The fill is the heart of the system and the performance of the entire system depends on maximizing the surface area of fill, evenly distributing the water across the surfaces, and optimizing the thickness of the water film to perform efficiently.

After years of operation, the fill media can eventually degrade to the point where it must be replaced. Building owners and operators can find it difficult to evaluate the claims by various manufacturers about which type of replacement fill is the best choice

Which Fill is Better?

The ideal way to understand what fill is optimal is through independent research rather than relying on manufacturers promoting their own product. The most objective evaluation would come from an unbiased side-by-side comparison, in a real life operational situation. The competing products would be observed for years to determine not only how well they perform at the time of installation, but how they stand up over time.

This is exactly what happened when a large professional sports arena in Southern California replaced the fill in its cooling towers. Three Baltimore Aircoil Company (BAC) Series 3000 Cooling Towers with a crossflow design had been contributing to the comfort and safety of the patrons of the 20,000-seat arena for 18 years. The cooling towers were performing adequately but due to their age, it was decided that the fill should be replaced as part of a long-term maintenance plan.

The plan was to replace the fill pack in one cooling tower per year, rather than taking all three towers off-line at once. In the first tower, and then in the second tower a year later, the fill was replaced with BAC’s VersaCross® Replacement Fill, a “hanging” style fill that matched the fill originally installed. When it came time to replace the fill in the third tower, the building owner decided to use a competitive product, a “block” style fill.

The BAC Series 3000 Cooling Tower has a crossflow design, meaning that the water flows vertically down the fill as air flows horizontally across it. Hot water from the system enters the cooling tower and is distributed over the fill (heat transfer surface). Air is drawn through the fill, causing a small portion of the water to evaporate. This evaporation removes heat from the remaining water, which is collected in the cold water basin and returned to the system to absorb more heat. The BAC Series 3000 Cooling Tower was designed to use hanging sheet fill and BAC VersaCross® Replacement Fill is the replacement OEM hanging fill on the market. Long continuous sheets with patterns embossed to increase surface area are hung to allow smooth water flow from top to bottom.

The block-style replacement fill is a fundamentally different design. Blocks are comprised of corrugated layers of PVC sheets, with wavy sheets sandwiched between layers of flat sheets. The 12” by 12” by 42” blocks are stacked vertically.

BAC raised concerns about whether the block style fill would perform adequately and whether it was compatible with the Series 3000 Cooling Tower design. The vertical spacing of block fill is wider than BAC hanging fill, providing less physical surface area than hanging fill. Reduced surface area results in less evaporative cooling.

Another concern was that water would not flow smoothly and evenly through the block fill. Within each block, where the corrugated layers are connected to each other, water flow can be impinged. Moreover, the transition between blocks significantly interrupts flow.

These connections between the flat pieces and the corrugated layers and the transitions between blocks also tend to trap solids. This can lead to scale buildup and fouling, resulting in unacceptable degradation in performance in just a few years.

After discussion among the building ownership and the installation contractor, the parties agreed that the block fill would be installed and an independent testing company, American Air Balance Co., would be retained by the arena owner to conduct tests comparing the performance of the cell with the block fill to the performance of one of the cells with the VersaCross® Fill.

The thermal testing was performed shortly after the block fill was installed. The chosen time was during a Saturday night NHL game because the arena was packed and the spectators were generating a lot of heat. All three cooling towers were running at full speed. 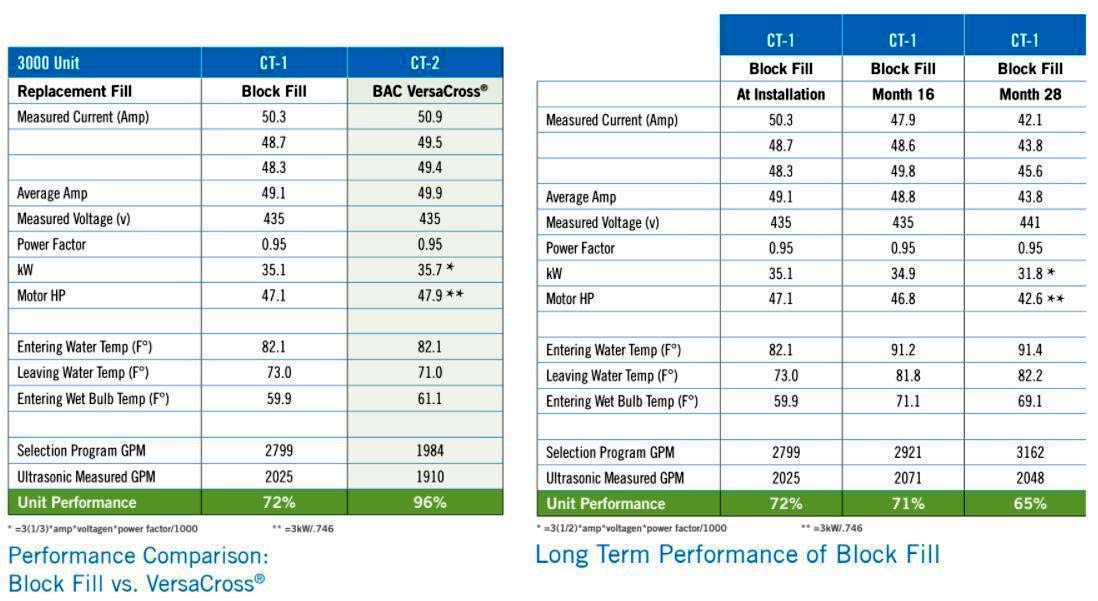 The cell with block fill was tested again by the independent lab 16 months after installation and again at 28 months. The results showed an additional performance drop-off during that 28-month period.

The arena’s real life experiment with side-by-side testing showed that the type of fill can make a big difference. The cooling towers in this case were designed to use hanging fill. Replacement with a third-party block fill significantly reduced evaporative cooling performance.

After the testing showed clear performance deficiencies of the block fill, the arena replaced the block fill with BAC VersaCross® Fill.

The block fill may have had a lower initial purchase price, but it ended up costing more in energy consumption, maintenance costs, and short useful life than if the OEM replacement fill had been selected. The arena learned the hard way that the design and the quality of the fill is critically important to cost-effective, efficient, and reliable performance of the evaporative cooling tower.