NASHVILLE, TN — The International Ground Source Heat Pump Association (IGSHPA) joined with the National Groundwater Association (NGWA) during Groundwater Week, December 14-16, 2021, at the Music City Convention Center, just a few blocks from Broadway Street where country music wannabes often mix it up with country music legends looking for a jam session. The NGWA and IGSHPA are both well-established groups serving the drilling and HVAC industries, respectively. The drillers and contractors made for a fitting jam session in their own right, as the two have been intertwined with the geothermal industry for decades.

IGSHPA Executive Director Jeff Hammond took the reins in the fall of 2021 and presided over the first Annual IGSHPA Conference of the newly established non-profit 501(c)(6), which evolved from the prior association operated under Oklahoma State University since 1987. IGSHPA has a current membership of about 600 people, comprised of contractors, drillers, manufacturers, and various other professionals affiliated with the industry.

Hammond opened the conference with thanks and recognition for not only the university but also the board of directors and others who worked tirelessly for the transition of IGSHPA. Hammond said, “Our goal is to make membership accessible to people and not put up walls to hinder them from joining IGSHPA. OSU provided firm leadership for many years and established a tremendous training curriculum that continues to guide this industry. The board had the foresight to get us in a position to address the challenges of the future.”

Kortney Lull, board chair of IGSHPA, was recognized as having championed the association transition and the hiring of Hammond.

“Ryan Dougherty, president of Geothermal Exchange Organization (GEO), helped drive our recent changes and worked with all parties to achieve the mutual benefit of our new status as a 501(c)(6),” she said during her opening remarks. “All the members hung their brand hats at the door and worked for the best interest of the industry.”

During the three-day conference, attendees had the opportunity to choose from residential, commercial, and driller tracks with a total of 24 options, with additional training sessions and leadership meetings to attend. During a panel discussion with the geothermal industry’s top manufacturers, the audience was able to quite candidly exchange ideas with four company executives. Jeff Hammond moderated the panel that included John Thomas, CEO, WaterFurnace International; Steve Smith, CEO, Enertech; Todd Graf, president, ClimateMaster; and Dustin Gregoire, national sales manager – AC products, Bosch. 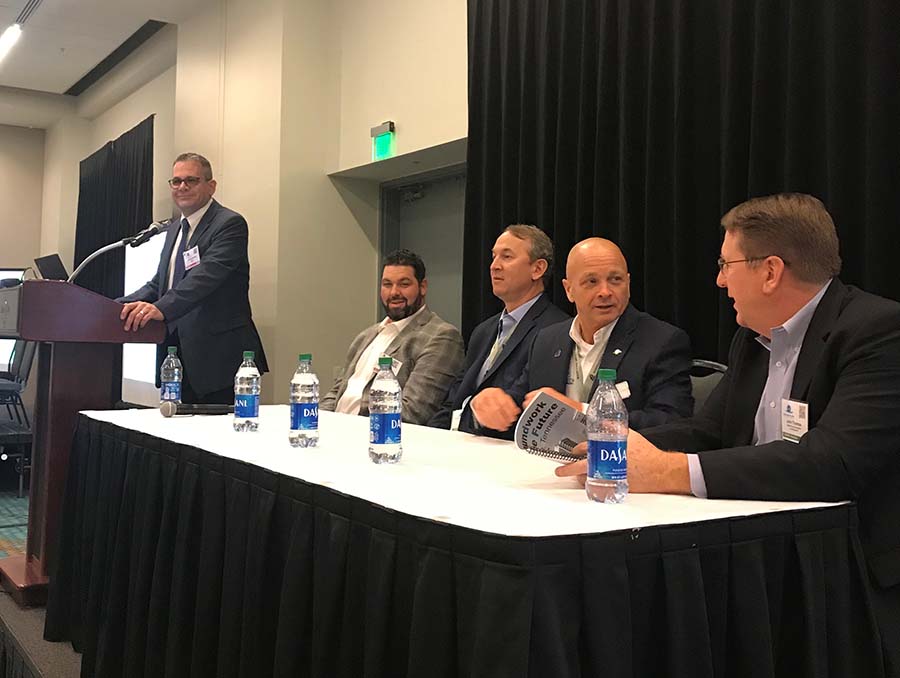 Discussing new product development (to the extent that four competitors would reveal product strategy), all agreed that the transition to A2L refrigerants between now and January 2025 will dictate most activity. The manufacturers admitted supply chain shortages would likely continue well into 2022, but did not foresee any major equipment production capacity issues. That being partially because geothermal shipments have been down recently, so production lines are operating below capacity.

Geothermal industry participants have always exhibited a penchant for camaraderie, sometimes known as getting the geo-religion, though that does not eliminate spirited jockeying for advantage within the channels. A loop contractor in the audience objected to a panelist’s comment, responding, “For 32 years, I’ve been hearing from manufacturers that we should make the loop less expensive. I think it’s time we got the equipment cost down.” This led to further discussion that the cost of an entire application is influenced by all three parties: the manufacturer, loop driller, and installing contractor. Some advocated for a simpler stripped-down equipment version, though others defended advanced technology as the thing that keeps geothermal competitive with traditional HVAC equipment.

During discussion about consumer marketing, Smith said, “A marketing problem we have experienced with our industry’s geo promotions directed at consumers is that leads are often squandered. In other words, customers were talked into buying other products by contractors. When we can collectively grow the market share to 5%, then we can go after each other. For now, we need to work together.”

John Thomas said, “Yes, we are getting in our own way oftentimes. In one of our industry surveys, we found only 8% of consumer respondents understood what geothermal is and does. We have challenges that still exist.” 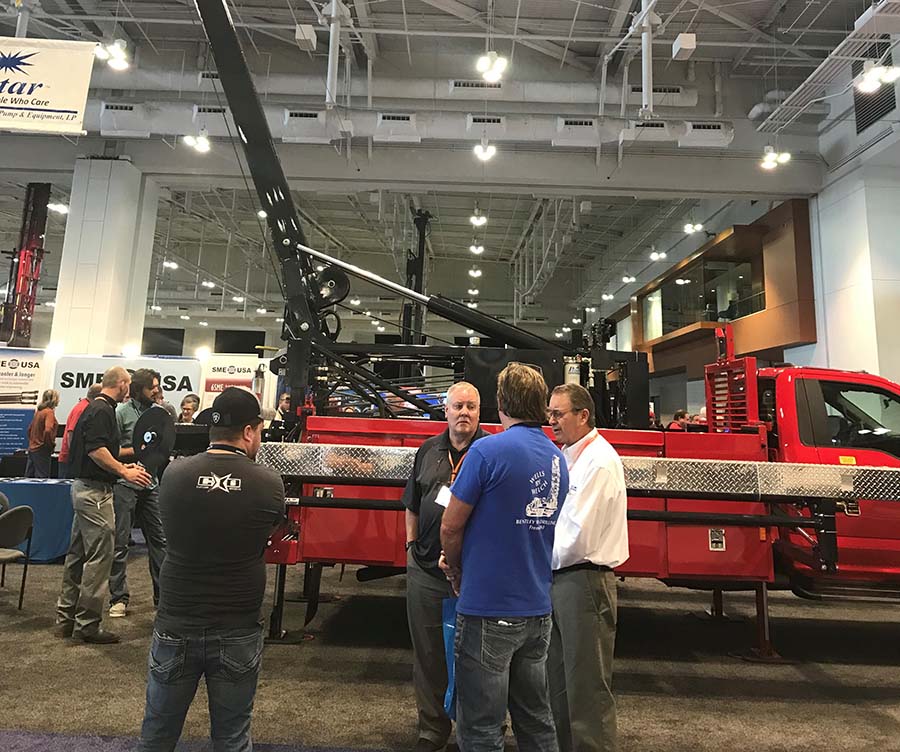 IGSHPA CONFERENCE: The IGSHPA Conference was held jointly with the National Ground Water Association where equipment manufacturers and drilling contractors and HVAC contractors joined forces. The Ground Water Week Expo drilling rigs towered above all else; in addition to being used for geothermal heat pump wells, one driller from Georgia revealed that her company managed a district water supply system, effectively acting as the local water utility company. (Staff photo)

The geothermal industry has relied on tax credits from the U.S. federal government for many years to stimulate consumer demand. The initial federal investment tax credit was part of the Energy Policy Act of 2005. This bill was passed to help solve energy problems and provide tax incentives for existing and new types of energy production, including wind and solar.

At the time, the credit only lasted through 2007, but was so successful that it was extended several times. In 2008, the program was broadened to include geothermal heating and cooling systems.

The federal tax credit initially allowed homeowners to claim 30% of the amount they spent on purchasing and installing a geothermal heat pump system from their federal income taxes. In December 2020, the tax credit for residential geothermal heat pump installations was extended through 2023. The tax credit currently stands at 26% throughout 2021 and 2022 before decreasing to 22% in 2023, and expiring past that date.

Lull said during the meeting on December 15, “We have more tax credits on the way, but I don’t think we need them. We need more to simply tell our success stories. We are the best-kept secret, and we all need to talk the talk in order to reduce our dependency upon the subsidizing tax credits.”

Whether needed or not, the current White House administration recently passed new legislation which gets the industry at least halfway to tax credit extensions past 2023. On November 15, 2021, President Biden signed into law the $1.2 trillion Infrastructure Investment and Jobs Act. The Act earlier passed both Houses on a bipartisan basis. The law represents the first part of the administration’s two-pronged plan for federal investment in U.S. infrastructure. The second part, a proposed $1.85 trillion social spending and climate change package, referred to as the Build Back Better Act, contains many of the more closely-watched tax and other sought-after incentives for the renewable energy industry, including extensions or increases in energy tax credits for solar, wind, geothermal, waste, fuel cell, and energy storage technologies.

At the time of Lull’s comment, the entire legislation package was expected to pass. However, as of this writing, a vote on Build Back Better legislation failed when U.S. Senator Joe Manchin declined to support the $1.85 trillion package. If eventually passed with no changes, this bill also contains 10-year extensions of the tax credits.

For more information about the conference and IGSHPA, go to https://igshpa.org/.