This website requires certain cookies to work and uses other cookies to help you have the best experience. By visiting this website, certain cookies have already been set, which you may delete and block. By closing this message or continuing to use our site, you agree to the use of cookies. Visit our updated privacy and cookie policy to learn more.
Home » Impending Refrigerant Transition Requires Preparation by HVAC Contractors
NewsNext Gen RefrigerantsHVAC Residential MarketHVAC Light Commercial MarketRefrigerationRefrigerantsLearnings & Training

Another refrigerant transition will soon be underway in the HVACR industry, and for many contractors, this is becoming old hat. For those who have been around long enough, they have not only transitioned from CFCs to HCFCs in the early 1990s, but then again to HFCs in the 2010s. Now the industry is moving to low-GWP HFCs, as well as HFOs/HFO blends, many of which are considered to be mildly flammable (A2L), so additional training will be needed in order to safely use these refrigerants.

While A2L air conditioners and heat pumps will likely not be on the market for another year or two (at the earliest), contractors should start thinking about training their technicians about these new refrigerants. They may also want to consider educating end users that, while R-410A will be phased down over the next 15 years, they shouldn’t worry about purchasing new equipment today. That’s because R-410A will be available — as both reclaimed and virgin — for the foreseeable future.

To recap the current situation, the federal American Innovation and Manufacturing Act of 2020 (AIM Act) gives the Environmental Protection Agency (EPA) the authority to phase down the consumption and production of HFC refrigerants and establish sector-based limits. While the details have not yet been finalized, the AIM Act is generally consistent with the Kigali amendment, which calls for an 85% phasedown of HFC production and consumption over a 15-year timeframe. EPA is expected to issue regulations by October that detail how it will administer the phasedown, but several steep production cuts are anticipated. (See Table 1, below.) At the state level, various legislatures are passing their own regulations that will strictly curb the use of high-GWP HFCs, such as R-404A and R-410A, over the next few years. 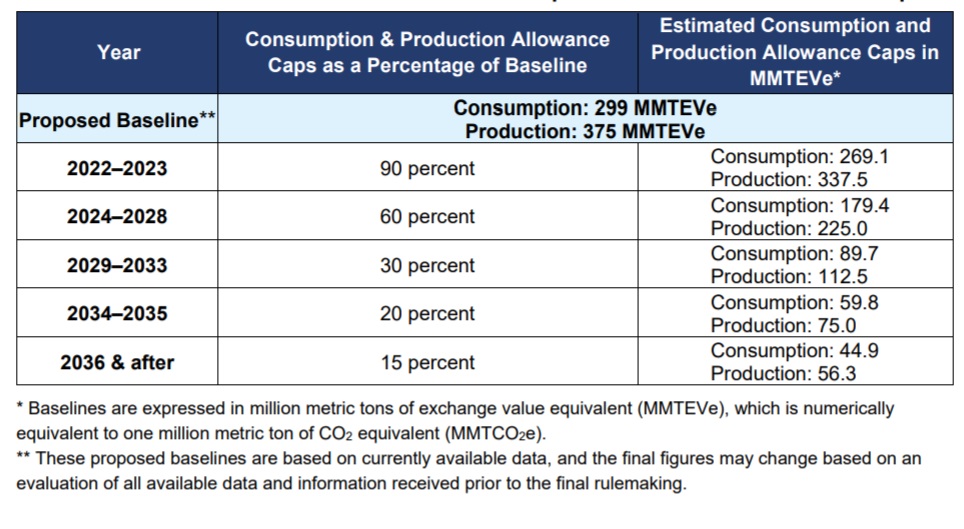 Manufacturers and industry groups have been spreading the word about the impending refrigerant transition for the last year or two, and as a result, a majority of contractors seem to know about the upcoming HFC phasedown, said Ben Middleton, national sales training manager at Goodman and Amana.

“Daikin completed a proprietary research study in December 2020 to better understand contractor awareness of the impending phasedown,” he said. “In that study of over 1,000 contractors, we learned that over 70% were aware of the impending phasedown, and their awareness increased significantly in 2020. As the dates for new equipment using A2Ls draw closer, it’s important for contractors to be informed of the changes.”

In order to keep their North American dealers and sales representatives informed about the transition, Daikin has been offering A2L training for several months. The company has developed a training module that has been made available for non-technical personnel on A2L refrigerants as well, said Middleton, and an additional training module for installing contractors will soon be published and offered in Daikin’s instructor-led virtual and classroom technical training courses.

ACCA has also been a prominent voice when it comes to addressing the phasedown of HFC refrigerants. The trade association and its members have offered testimony to EPA during the proposed rulemaking process that calls for “level-headed common-sense requirements that support a smooth transition,” said Wes Davis, director of technical services at ACCA. The association also launched an A2L refrigerant training program late last year.

“This training was developed based on the American Society of Heating, Refrigerating and Air-Conditioning Engineers (ASHRAE) Safety Standard 15-2019 and Underwriters Laboratory (UL) 60335 2-40 standards,” he said. “The training provides an introduction to the new refrigerant, instruction to handle it safely, and a review of tools that will be needed to work on equipment with A2L refrigerants.”

“It is similar to the R-22 to R410A transition,” said Obrzut. “There were contractors who were well prepared for the switch, and those who waited until the last minute. Those who waited had a rough time going through the transition, and we can expect the same this time around. Those who seek out training and are well informed will experience a smoother transition than those who wait.”

One of the reasons why some contractors have waited to train their technicians is that the brands they carry have not yet made a decision about which A2L refrigerant — if any — they are going to use. Another reason is that the details of the phasedown have not yet been finalized, which is why Eric Knaak, president of Isaac Heating and Air Conditioning in Rochester, New York, has held off up until now.

“We haven't started training yet, and that is intentional,” he said. “Part of the challenge with the phasedown is even knowing what it is going to look like. And there are different opinions between the manufacturers and the distributors, which impacts the contractors. In the end, contractors are the ones who have to figure out how to do whatever has to be done, based on what decisions are made by the manufacturers and the distributors. Because the industry as a whole has not been completely aligned on what this is going to look like, we've really kind of held off on doing too much with our technical folks and sales staff.”

Once EPA finalizes the guidelines, Knaak said that the director of training at the Isaac Training and Education Center (ITEC) will be able to put together a program and move employees through quickly and efficiently.

“We will have everybody up to speed and working safely and doing everything they need to, as well be certified, if that’s going to come out,” said Knaak. “I know ACCA is working on that, and I believe NATE is working on that as well, so we'll be prepared to do the training and certification for A2Ls.” 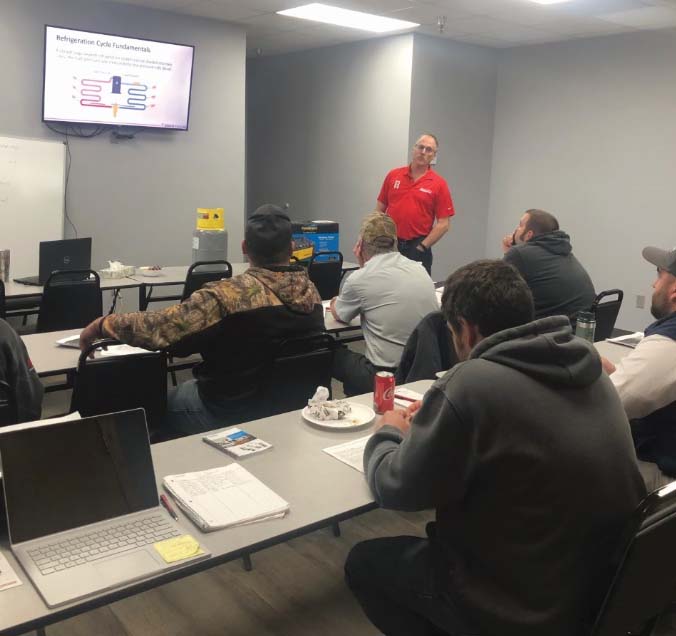 Terry Thie, director of HVAC service and training at Plumbing & Heating Wholesale Inc. in Sioux Falls, South Dakota, has been offering ESCO’s training program to contractors since April, and he plans to train between 100 and 200 contractors about using A2Ls. Training was suspended due to the busy summer season, but he plans to start it back up this fall.

“My contractors are probably tired of me harping on them to get training,” he said. “I've always said the work will be there tomorrow or the next day, but training opportunities may not always be there. Where it’s mine or anybody else’s, training is important, and I’m a big advocate.”

Asked whether contractors in his area — primarily Iowa and South Dakota — are paying attention to the upcoming transition, Thie was blunt in his response.

“Absolutely not,” he said. “In my 35 years in the industry, I’ve learned that, especially in our part of the Midwest here, nobody does anything until they're absolutely forced to. So to call a great majority of our contractors proactive would just not be true. They're more reactionary than anything. They know it, and they may know it's not good, but it's just kind of their way of doing things.”

In his conversations with contractors, Thie emphasizes the importance of being proactive rather than reactive when it comes to A2L training. Some contractors are leery of the new refrigerants, primarily because they are mildly flammable, but Thie stresses that it’s really no different than working with today’s gas-fired furnaces with air conditioner coils sitting on top of them.

“The furnace, all the piping, every aspect of that thing has to be leak-free to keep people safe and to not create combustible scenarios,” he said. “It's going to be the exact same thing when we're dealing with slightly flammable A2Ls. It's extremely hard to create a flammable condition because of the makeup of A2L refrigerants. I'm trying to get them to understand that the practices are going to remain the same — we just have to make sure we're installing equipment correctly and creating leak-free systems. If they do that, then 99% of the time, they’re not going to see an issue.”

But change is hard, noted Davis, and until HVAC professionals have handled, installed, and experienced the A2L refrigerant and equipment, there will be apprehension and maybe a slight suspicion. But as they gain experience and confidence, those concerns will evaporate, he said, especially since the transition is supported by proper and timely training on how to safely and adequately handle A2L refrigerants.

“The biggest thing for contractors to understand is that A2L refrigerants are very safe,” he said. “There has been research to simulate A2L refrigerant leaks near heat sources, and it takes a very particular set of circumstances for the refrigerant to ignite. Of course, there is still a concern that a leak could lead to asphyxiation, but that could happen with any refrigerant. For decades our members have safely worked with electricity, natural gas, and liquid petroleum — all of which are very combustible — to bring comfort and healthy indoor conditions.”

Some states, including Florida, Washington, and Oregon, have already approved the use of A2L refrigerants, so contractors in those areas, in particular, should begin education and preparations now, said Middleton. They should also be prepared to answer questions from homeowners about the refrigerant transition, and Daikin’s website, www.r32reasons.com, can help in that preparation, he said.

“For commercial contractors with longer lifecycles, it’s a good time to start the conversation, letting customers know a refrigerant transition is coming, and helping them learn how and why to make the transition,” he said. “They can be reassured that many manufacturers, including Daikin, are already manufacturing and installing commercial systems with R-32 refrigerant in many parts of the world.”

While there are still some lingering questions about tools, installation, charging procedures, and transportation of the various A2L refrigerants, the soon-to-be released ASHRAE Standard 15.2 should answer many of these questions, said Obrzut. Equipment manufacturers are also hard at work developing tools and equipment rated for use with A2Ls, and information on these topics should be available soon, he said. As far as training is concerned, the time to act is now.

“Contractors need to know that the transition and phasedown are closer than they think,” said Obrzut. “In January 2022, the HFC phasedown will begin with a 10% reduction. This is not something that is in the distant future; it is happening now. It is also not a question of, ‘is this really going to happen?’ It is — for sure. Training is already available from a number of industry organizations and manufacturers, and if contractors wait until the last minute to enroll in training, they may find themselves in a long line. Contractors who embrace the new technology early will be better prepared when it hits the market.”