This website requires certain cookies to work and uses other cookies to help you have the best experience. By visiting this website, certain cookies have already been set, which you may delete and block. By closing this message or continuing to use our site, you agree to the use of cookies. Visit our updated privacy and cookie policy to learn more.
Home » Flame University Graduates First Team Of Techs
NewsHVAC Residential MarketHVAC Light Commercial MarketTraining and Education

Gary Marowske, president of Flame Heating, Cooling, Plumbing and Electrical, isn’t waiting around for job applicants to come knocking on his door. He’s growing his own team from scratch — and training them the right way from the start. In June, the Warren, Michigan-based contractor held its first ceremony for graduates of Flame University. More than 60 people crowded into Flame’s headquarters to watch as aspiring HVAC technicians lined up for cheers and congratulations.

“This is a really great evening for everybody here,” said Marowske. “We now have 13 people who have gone through graduation — some still have more training, five or six of them are now getting in the trucks, learning a trade, a career. Everybody's made a sacrifice to get here, and all of you really deserve a big hand for supporting each other.” 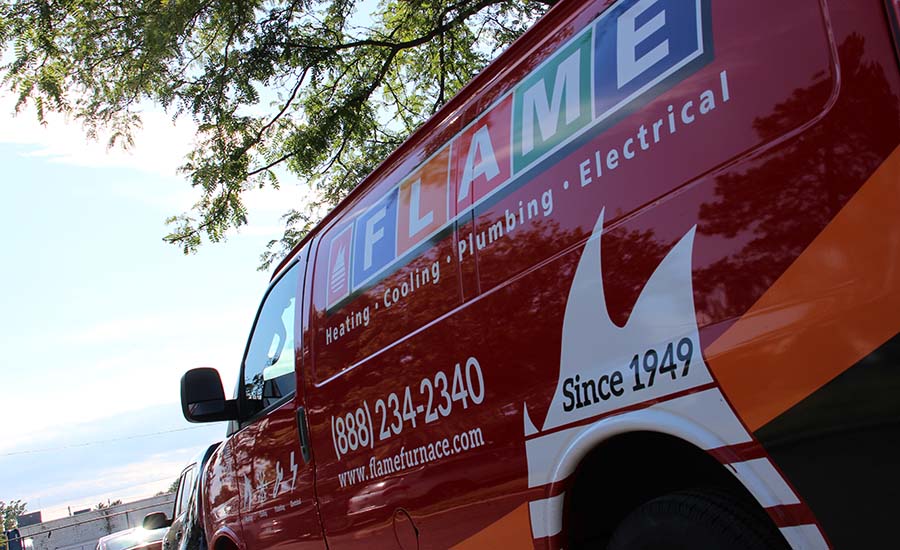 Gary Marowske, president of FLAME Heating, Cooling, Plumbing and Electrical, has his own take on solving the labor shortage. (Staff photo) 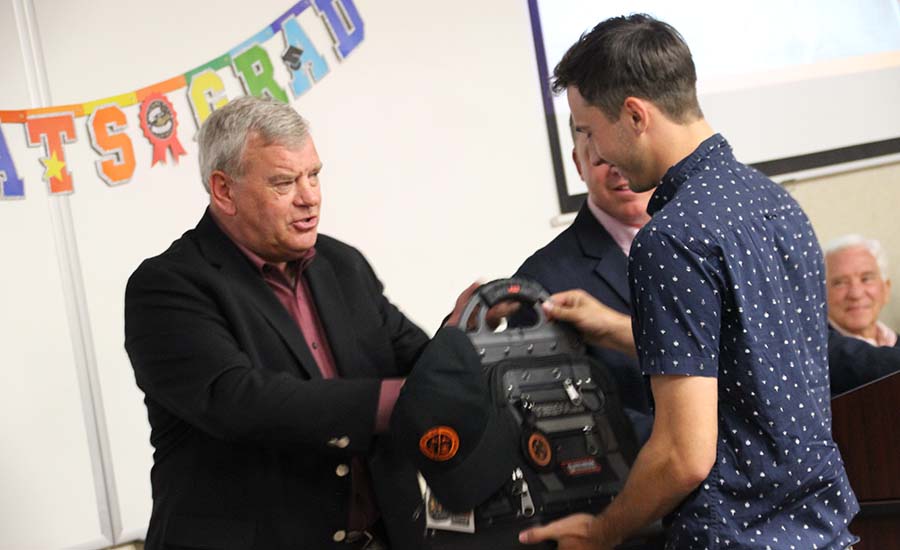 Flame University, the company’s in-house training school, is this contractor’s way of tackling the labor shortage. In the process, they’re creating exactly the kind of technicians Marowske would like to see working at Flame.

“The vision here is to have this self-contained school within our four walls, and it’s something that made a lot of meeting agendas,” said Joe Gregart, general manager at Flame. In the past, the company had hired “free agents scattered from other heating and cooling companies — the guys who jump from company to company,” he said. “And it really was a waste. They never really fit into the culture; they never raised their game to our standard of quality. So we decided to grow our own team of techs.” 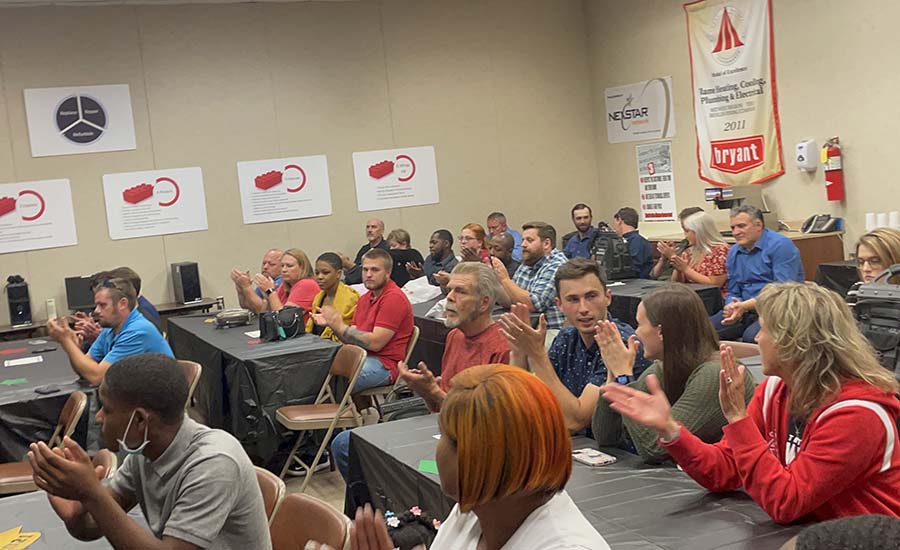 More than 60 people crowded into Flame’s headquarters to watch as graduates lined up for cheers and congratulations. (Staff photo) 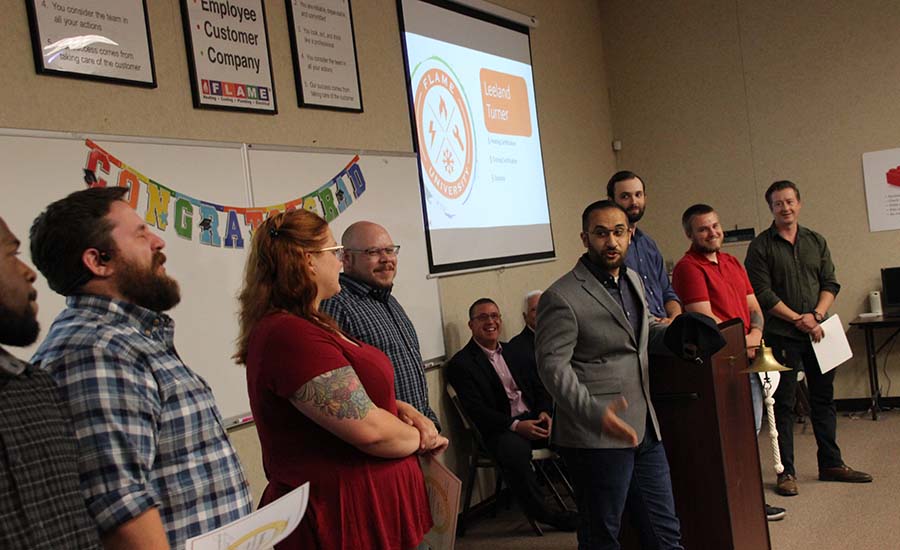 Mentorship is a key part of the program’s success. (Staff photo)

Training at Flame University consists of two components, explained Gregart. One part is working with equipment in a training lab at Flame’s headquarters, which has various types of HVAC equipment — boilers, furnaces old and new, basic and high-efficiency — all wired and working.

“For certain skill sets, for certain troubleshooting issues, they come back here and practice before they go live,” Gregart explained. 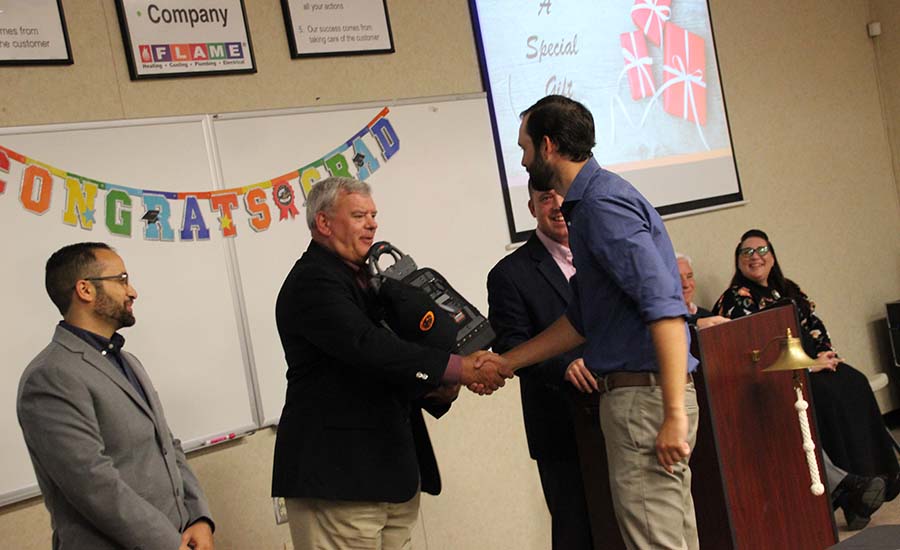 The graduates all received a hat, T-shirt, and a tool bag with their name on it. (Staff photo) 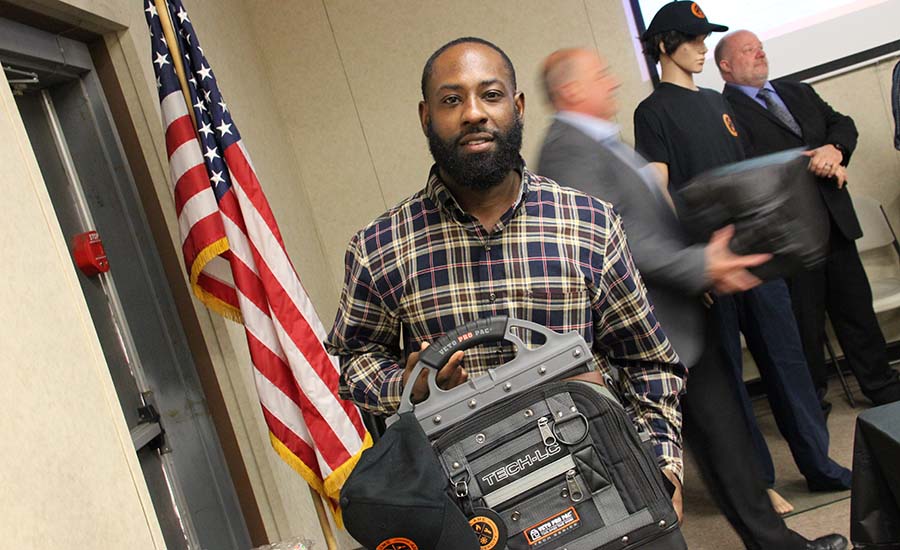 Graduates shared a bit of their story with the audience. (Staff photo)

The other part is on-the-job training and mentorship, which is a key part of the program's success. Rookies are paired with experienced Flame technicians, whom they can call for guidance or advice at any time. It’s a big shift from when Gregart was first entering the trades, which he described as a “kind of awkward, earn-your-stripes” approach.

At Flame, it’s quite the opposite: Training is viewed as an investment.

“Our guys right now — our elder craftsmen who have been in the trade for a while — are reaching back and sharing their knowledge with these guys in an open way, cultivating the next generation of craftsmen,” Gregart said. “Not only do they do the training here in the lab, the modular work, but these mentors are taking these younger guys along [on calls]. Really the shoulder-to-shoulder stuff is where it all culminates. We’re building this minor league team into a major league club.” 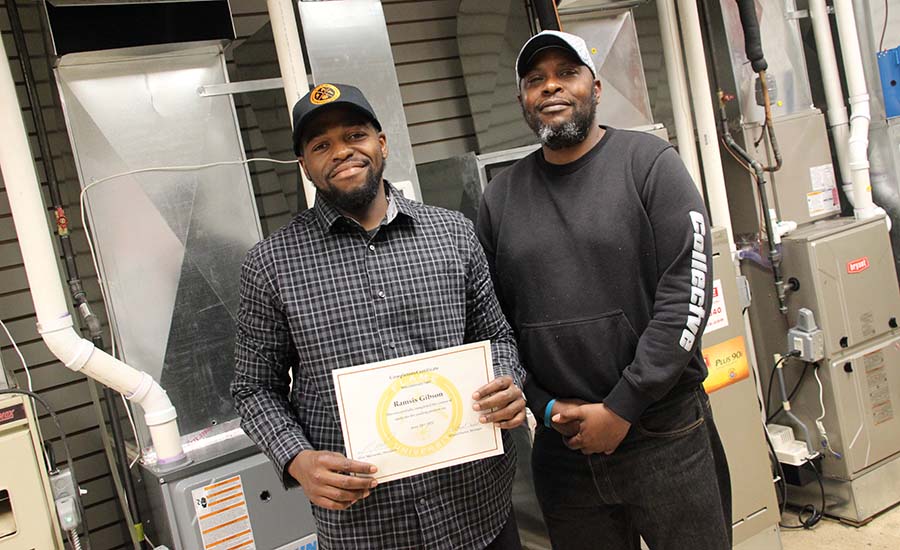 Ramsis Gipson started out in HVAC. He worked for his dad’s business starting at age 15. (Staff photo)

At the ceremony, graduates all received a hat, T-shirt, and a tool bag with their name on it, while mentors shared a bit of each student’s success story with the audience.

Anna Szalma made the jump to HVAC three years ago. At the time, she was working as a janitor.

“I changed my major in college about a thousand times. I got halfway through an accounting degree and I realized I did not want to do that, and my dad said, ‘Go pick a trade.’ So I did,” Szalma said. “And I wish I had listened to him sooner because I love it.”

Szalma didn’t even have to put out her resume to get a job. Her job services advisor at Northwestern Tech gave Marowske her resume, and two days later, she got a call for an interview. Her only regret is that she wasn’t made aware earlier on in life that the trades were an option as a career.

“When I was in high school, years ago, they didn't talk about trades at all — not even to the men,” she said. “It was, ‘You have to go get a four-year degree. That's it. That's how you're successful in America. If you don't do that, you're out of luck.’ And I wish I had realized sooner how valuable a trade job is because it's been great. I actually am excited to go to work every day now, and I very rarely have bad days here.”

Bill Weiss chose HVAC after a career in the Coast Guard. He, too, came to Flame after graduating from Northwestern Tech.

“It’s fine-tuning what was fed to us with a fire hose in school — focusing more on the troubleshooting aspect of it, bringing everything together that you spent 10 months on in school,” he said. “I just enjoy the challenge. I enjoy problem solving, which is why I chose the service path. I spent 20 years driving boats and doing law enforcement; nothing like this. This has challenged me in ways that I didn't think I was going to have after I retired.”

Ramses Gibson started out in HVAC working for his dad's business, starting at age 15 by carrying bags. Once he got older, his dad sent him to Flame to learn from the best, as he put it. Gibson, at 29, is now an aspiring HVAC professional in his own right.

“What I learned pretty much is there’s always room for growth,” he said. “What I look forward to the most is the fact that I can get more hands-on experience, deal with a/c’s, learn how the whole system operates. That way, it gives me a better understanding of the trade — and helps you become a better man.”