Compressor technology is getting both smart and small

Compressors can sometimes fly under the radar when it comes to air conditioning equipment. The compressor is arguably the heart of the whole cooling operation, after all, but unless trouble develops, their typically steady performance can go unnoticed.

On the residential side at Emerson, the priority has been advancing technical capability while smoothing the refrigerant transition for contractors.

Leslie called the ZPK7 the “most efficient fixed-speed scroll compressor for air conditioning in the 100-year history of the Copeland brand.”

With the line ranging from 1.5 to 5 tons and optimized for R410A, R32, and R454B refrigerants, the idea is to offer improvement without adding complexity for future jobs.

On the commercial side, the ZPKZ ranges from 6 to 40 tons and is suitable for an array of rooftop, split, chiller, and reversible systems. Leslie describes it as enabling higher IIER and IPLV efficiencies as well as “regulation-ready,” prepared for variants and 2024-2025 low-GWP requirements.

Julie Havenar, Emerson’s director of integrated marketing, cold chain, reports that bringing the benefits of variable speed to the commercial refrigeration space is where it’s happening at the moment.

Unlike common fixed-speed designs, this lets compressors run continuously and modulate capacity based on demand. To that end, Copeland is pairing its variable-speed compressor lines with VFDs to maximize inherent efficiencies.

The vertical and horizontal scrolls and reciprocal hermetic compressors were already looking better, according to Havenar, thanks to brushless permanent magnet (PM) motors “to deliver 15 to 30% energy efficiency ratio (EER) improvements.”

The arrival of VFDs into that mix amplifies those benefits while providing advanced protection, Havenar said. She added that the company’s OEM partners are finding the resulting products helpful in meeting DOE regulations, achieving Energy Star® certification, and meeting customers’ sustainability objectives.

Compressors Are Centered For Success

Released in North American with an eye toward its residential market just as the pandemic was kicking in, the R1 compressor from LG Electronics brings in a fairly uncommon word for compressor conversations: hybrid.

At the last AHR Expo, Robertson took a minute to elaborate on what “hybrid” yields in this case.

“The compressor takes the scroll mechanism, has a shaft that penetrates through the scroll, and actually oscillates. It gets the scroll, mid-shell, closer to the oil supply. By moving it to the center, it becomes more stable and we get more efficiency.”

That placement also reduces the distance that oil must be pumped.

The R1 operates in the 10-150HZ range and sports a 15:1 turndown ratio, according to the manufacturer, who also cites a 20% weight reduction over previous flagship models.

All in all, Robertson calls the R1 “a good example of how compressors have evolved,” blending scroll and rotary strengths to noticeably improve “several behavioral metrics that will benefit systems that apply variable-speed compressors.”

As for the seemingly never-ending refrigerant evolution, Robertson is keeping it concise.

“LG will develop compressors to meet our OEM customer needs, regardless of refrigerant preference.”

Compressors Are Quieter and Smaller 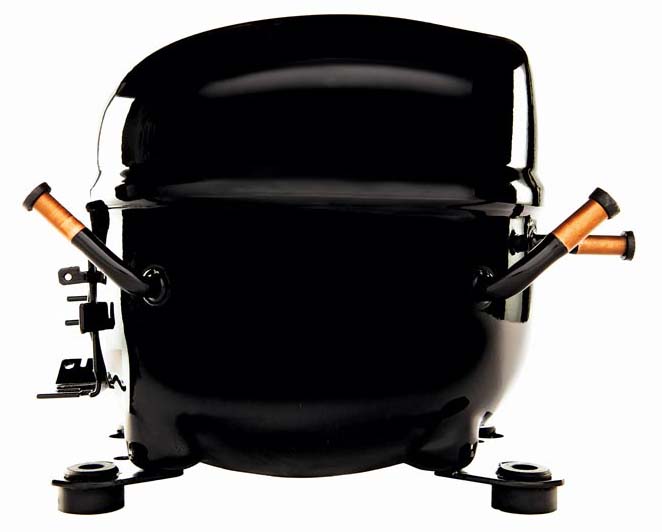 MINIATURIZATION MAXIMIZES: The Embraco NEX compressor offers commercial users a cooling capacity that allows it to replace larger models while standing 12% shorter and yielding a 10% boost in energy efficiency. (Courtesy of Nidec)

“We could say there are three main areas of focus where our innovation has shined,” said Kerry O’Brate, aftermarket sales senior manager for North America at Nidec Global Appliance, holder of the Embraco brand of refrigerant solutions.

“Within the fixed-speed category,” O’Brate said, “our compressors today are 160% more efficient than those we produced 20 years ago.”

She also extolled the energy reduction made possible by bringing an inverter into modern designs.

Less is more when it comes to compressor size, and the manufacturer has made gains there as well. Miniaturization actually generates “a compound of gains,” O’Brate explained. These include not just a smaller footprint but “better acoustic performance, reduction of the refrigeration charge, and more space inside the cabinet.”

O’Brate gave an example in the form of the Embraco FMS, launching this year for residential applications. She describes it as 40% smaller than the next largest compressor it can replace while delivering 40% reduction in energy consumption.

The ES model represents the fixed-speed result of miniaturization, 30% smaller than its residential predecessors and 30% to 40% more energy efficiency.

For commercial users, the NEX has a cooling capacity that allows it to replace larger models while standing 12% shorter and yielding a 10% boost in energy efficiency.

Hot Market For Cold On The Go

Josh Barnett, marketing communications specialist for Tecumseh, echoes the trend toward smaller compressors while reminding that cost remains a main driver, too.

“Energy efficiency regulations combined with environmental protection are pushing the food service and food retail equipment manufacturers” in this direction, he said, and that seems unlikely to change in the near future.

With the HFC phasedown not quite underway, Barnett said Tecumseh has been one of the first to develop A2L-based compressors for larger capacities.

The company has continued to invest in innovating compressors to use R-290 for light commercial applications. As an example, Barnett said, the Series AL responds to all of the above trends in terms of size and performance.

Tecumseh has expanded its A2L-friendly options, especially for instances where R-290-based light commercial compressors may not carry sufficient capacity but CO2-based systems may be too large.

Tecumseh has also responded to a pandemic-related development with its Masterflux line. The variable-capacity, direct-current Masterflux units aim to serve the parts of the food industry where “last-mile delivery” has become a critical capability over the last year or so.

Controls and Apps for Compressors

Compressor manufacturers have set ambitions beyond the hardware itself to keep up with increasing controls possibilities and higher expectations for ease of use.

Emerson’s Leslie stressed his company’s strength in terms of technical expertise and support. He also pointed to resources that reside, like so much else these days, on a phone.

Nidec has worked on improving the control logic within the converter on its Embraco units, and O’Brate said that has had “a significant impact on optimizing the ‘communication’ between the compressor and the final application.”

She noted that the latest embedded inverter controls allow the company to achieve higher motor speeds inside the compressor, allowing smaller designs to offer more capacity. This technology also positions compressors better to deal with the frequent pull-downs and reloads of light commercial applications.

As for software, O’Brate mentioned the Smart Drop-In. The control logic software is designed to adjust compressor speed in situations like “defrost, extensive door opening, and first temperature recovery” while offering a more user-friendly experience than past versions.