For more than 10 years, R-410A has been the refrigerant used in virtually every rooftop unit (RTU) manufactured in the U.S. That will be changing in the not-so-distant future, as last December, Congress passed the American Innovation in Manufacturing (AIM) Act, which gives the Environmental Protection Agency (EPA) the authority to phase down the consumption and production of high-GWP HFC refrigerants and establish sector-based limits.

While the details have not yet been finalized, the AIM Act is generally consistent with the Kigali amendment, which calls for an 85% phasedown of HFC production and consumption over a 16-year timeframe. EPA is expected to issue regulations by October that detail how it will administer the phasedown. This phasedown has been expected for a while, which is why OEMs have been working diligently to identify alternative refrigerants that are safe and efficient, as well as comply with the new regulations.

With the change in presidential administrations and the passing of the AIM Act in December 2020, the EPA now has new authority to regulate a potent group of greenhouse gases known as HFCs, said Brian Smith, director of chiller products at Johnson Controls. While OEMs know the direction of the phasedown, Smith noted that they are advising caution in terms of how quickly this will unfold, given the complexities of the change in direction between the past two administrations and Congress.

“We have found that proclamations by politicians and commercial interests have confused building owners and the consulting communities,” he said. “This confusion can cause consultants or building owners to think that equipment they have recently bought — or even will buy in the next year — is at risk of not having refrigerant for servicing.”

This is not the case, stressed Smith, as regulators have taken the approach, along with the EPA with past Significant New Alternatives Policy [SNAP] rules, to phase out the sale of new equipment at future dates for specific industry sectors (e.g., stationary air conditioners, chillers, VRF). This means that the industry should have plenty of time to prepare for the deadline(s) by which the production of high-GWP equipment will cease.

“This provides the necessary time for equipment manufacturers, component suppliers, service technicians and operators, and the entire supply chain to transition without adversely affecting the normal operation of businesses that rely on air conditioning for comfort or for process cooling and heating,” said Smith.

Until the AIM Act was passed, there was little movement at the federal level, leading many individual states to propose their own regulations to phase down high-GWP refrigerants. California is one of the states that is well along in the process of adopting regulations for a phasedown, but it has gone a step further by proposing a GWP limit of 750 for chillers starting in 2024. The same GWP limit will be required by 2025 for ducted residential and commercial air conditioning equipment (including RTUs) and in VRF systems by 2026.

Most OEMs are hoping that states will drop their HFC regulations and follow the implementation schedule of EPA’s AIM Act. 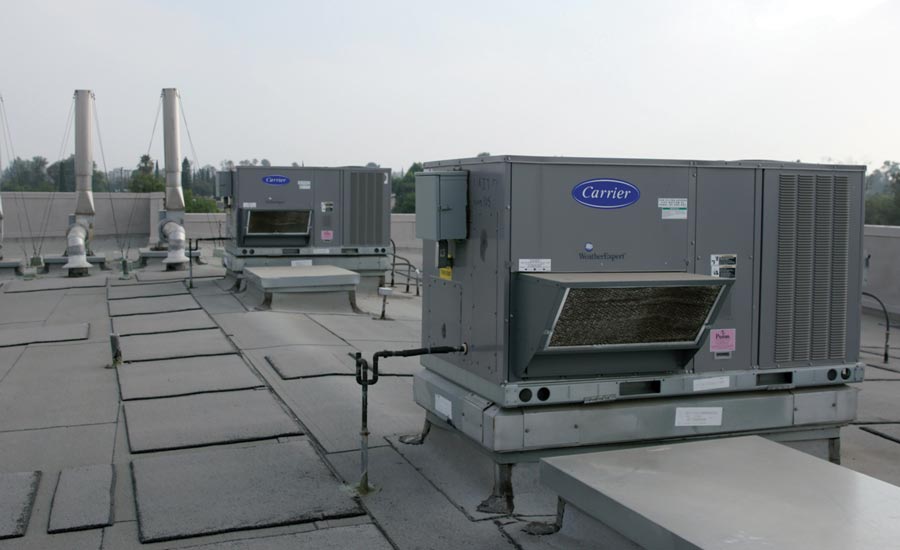 Safety standards classify RTUs and residential products to be direct systems, which means that refrigerant is in the occupied space. To support the 750 GWP limit proposed by California, lower flammability refrigerants — called A2Ls — will likely be required, but first, changes will have to be made to codes and standards. This is not a quick process, noted Gaurang Pandya, president of Carrier Commercial HVAC, as changes to safety standards like UL60335-2-40 and ASHRAE 15 will be required, followed by the adoption of model building codes including the IMC, IRC, UMC, IFC, and NFPA1, and then finally adoption by the state building codes.

“The industry has invested over $10 million in research to support these changes, but completion and adoption of the safety standards and building codes is needed to allow for the use of new refrigerants in rooftops and other products,” he said. “The next update to codes is 2024, and it is critical that the A2L code modification is adopted. Then individual states will have to adopt the codes, which historically takes up to eight years.”

Like other OEMs, Carrier has been working on optimizing its equipment to support the use of low-GWP A2L refrigerants. The company previously announced it will use the A2L refrigerant, R-454B, which offers a GWP of 466, in all of its ducted residential and light commercial packaged solutions sold in North America. In addition to working on the refrigerant transition, Carrier is working on new equipment designs to align with the new minimum efficiencies approved by the Department of Energy (DOE) and ASHRAE Standard 90.1, which go into effect on Jan. 1, 2023. 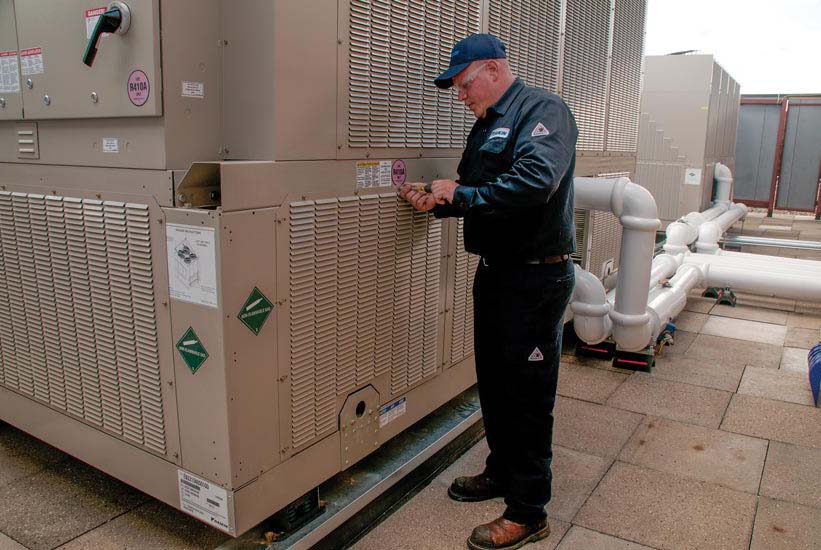 GREATER EFFICIENCY: Given its thermodynamic properties, R-32 will perform in RTUs at least as efficiently as today’s technology, and in many cases may even offer even greater capacity and efficiency. (Courtesy of Daikin Applied)

“[Daikin] has committed to R-32 as the replacement of choice because it is widely available, manufactured by numerous refrigerant producers in U.S. and abroad, and distributed globally,” he said. “There are no active patents on the basic molecule, and R-32 has a lower price per pound than both R-410A and most proprietary low-GWP blends. Plus, it’s a single-component refrigerant and has excellent thermodynamic properties, which provide a variety of other performance and cost benefits — from reduced usage to easy recycling.”

Given its thermodynamic properties, rooftops with R-32 will be at least as efficient as today’s technology, and in many cases will be able to offer even greater capacity and efficiency, added Macosko.

“In fact, lab tests using rooftop units with inverter-driven compressors have shown that full- and part-load efficiency rating metrics improve up to 12% using R-32 as compared to R-410A,” he said. “This means R-32 can achieve the same capacity at a lower refrigerant flow rate. And at a lower flow rate, less energy is required to produce refrigerant flow, resulting in higher efficiencies.”

Because R-32 is a single-component refrigerant, its composition doesn’t change over time as it does with most blended refrigerants, added Macosko. This means there are no negative performance impacts due to composition change. R-32 can also be easily topped off or recharged in the field in either a liquid or gas phase, he said.

“As with any refrigerant evaluation process, there are a variety of factors to consider,” he said. “Efficiency is one of the factors being considered in our low-GWP alternative evaluation; other metrics such as capacity, discharge temperature, glide, similarity to R-410A, cost, and availability are also considered. Some of the new low-GWP alternatives have very close performance to today’s incumbent R-410A, which could result in similar or even some of the same system components. One of the new alternatives exhibits characteristics that will require significant compressor modifications to accommodate higher discharge temperatures.”

Whenever there is a transition to a new refrigerant, the question often raised is whether or not it can be retrofitted into an existing piece of equipment. When it comes to A2L refrigerants, the answer is no, they cannot be used in equipment designed to use R-410A.

“As the new low-GWP alternatives are officially classified by ASHRAE as A2L mildly flammable, legacy, and nonflammable equipment, which was never designed to utilize such flammable A2L refrigerants, cannot be retrofitted with any of the current leading low-GWP candidates,” said Forth. “The new UL and ASHRAE safety standards also have additional requirements, such as refrigerant sensors and safety mitigation sequences, which must be approved when the equipment is approved and listed by the safety agency (e.g., UL, CSA, ITS); therefore, such sensors and control strategies cannot be applied to existing rooftops in the field. While this may be seen as a limitation to the conversion process, it makes safety the top criteria.”

There are no true drop-in refrigerants, stressed Macosko, and retrofitting older rooftops is not possible because the shift from R-410A to R-32 — or any other A2L — requires design evaluations and modifications by the equipment manufacturer. In addition to A2L equipment having to meet the new UL product safety standard, 60335-2-40, third edition, there will also be changes to these systems’ piping, oil, and refrigeration cycle operation, he noted.

With retrofitting off the table, some end users may be concerned about purchasing an R-410A RTU, given that new regulations will call for the future phasedown of the refrigerant. This should not be a guiding concern, though, as historically, refrigerant regulations have not forced early retirement of existing equipment, said Forth.

“We expect this transition from EPA will not be any different,” he said. “Just as with the R-22 phaseout, contractors should encourage rooftop equipment owners to implement best-in-class refrigerant management practices, which call for regular performance assessments and at least annual leak inspections.”

If there is a concern about a future refrigerant shortage, however, Forth advises contractors and equipment owners to forge relationships with refrigerant reclaimers to establish a bank program for their current inventory of R-22 and R-410A equipment.

“While such programs have existed for R-22 due to its phaseout in the rooftop sector, there has been less incentive to do so for R-410A,” he said. “In the new AIM Act, EPA was granted authority to regulate existing emissions, which could translate into new service and reclaim mandates for systems containing less than 50 lbs. of refrigerant; thus, rooftop owners would be wise to establish management programs now while R-410A remains inexpensive and plentiful.”

So, if an RTU unit needs to be replaced within the next few years, contractors should advise their customers that there is no need to wait for the new refrigerant. R-410A will be readily available for years to come, and there may be larger benefits that will be experienced by replacing older equipment sooner rather than later.

“It’s clear that if equipment is more than 10 years old, there are significant opportunities for improved energy efficiency and performance (e.g., higher IEERs, variable-speed drive blower motors and compressors),” said Forth. “These will typically have a bigger, positive environmental impact due to their improvement in indirect greenhouse gas emissions savings at the power source/power plant, which are typically much larger than the direct emissions from the equipment itself.”