The idea of expanding career training opportunities has generated more bipartisan interest in Washington than most other political topics in recent years. Bipartisan does not mean agreement on the details, though, and the preferred strategy for increasing the country’s skilled workforce has varied according to who enjoys more political clout at the time.

The National Apprenticeship Act of 2021 represents the most recent effort. Introduced by Rep. Bobby Scott (D-Virginia), the bill passed in the House on Feb. 5 on the strength of support from 219 Democrats and 28 Republicans.

The bill proposes to strengthen the existing network of registered apprenticeship, youth apprenticeship, and pre-apprenticeship programs. According to the House Committee on Education and Labor (PDF), of which Rep. Scott is chairman, the bill would codify and streamline standards as well as the Department of Labor’s Office of Apprenticeship.

The House version authorizes $400 million for a variety of apprenticeship-building tasks in 2022, and that amount would increase by $100 million each year through 2026. Scott’s committee info notes that the U.S. “spends only about 0.1% of gross domestic product on workforce training and employment programs, while our peer industrialized nations spend roughly six times as much as a share of GDP.”

The bill’s supporters project it would result in nearly 1 million new apprenticeship opportunities.

Build Up or Build Out

The 2021 Act’s historical precedent reaches back to the original National Apprenticeship Act, often referred to as the Fitzgerald Act, passed in 1937 to provide the first federal regulation of apprenticeship programs.

Choosing to invest in infrastructure coordinated overwhelmingly by union organizations is not a surprising choice by Democrats with a precarious but meaningful current legislative advantage.

“Biden has made it clear that he plans to strengthen unions overall and stated in specific that he will encourage community colleges to partner with unions because they ‘oversee some of the best apprenticeship programs throughout our nation,’” said Chris Czarnecki, ACCA government relations representative, in a recent post.

Czarnecki pointed out that the Trump administration had “very publicly tried to decouple apprenticeships from unions by establishing Industry-Recognized Apprenticeship Programs (IRAP).

The Biden administration recently pulled the plug on the IRAP idea in favor of the recent bill. Mechanical Contractors Association of America (MCAA) general counsel John McNerney felt that was the correct decision. MCAA membership includes many commercial contractors and union professionals.

McNerney questioned the premise that an entirely separate IRAP program was needed in the first place. He also noted that as an appointed panel developed the concept, some of their recommendations were ignored by the previous administration’s Department of Labor, including the advice to try it out on pilot projects.

Other opposition to IRAPs centered around a less regulated environment where some programs might not have to adhere to the same training standards and criteria.

Ultimately, the issue became moot for the HVAC industry, as the program’s final wording maintained a construction exemption that met with divided reaction and essentially kept HVAC out of the IRAP model.

With a track record of supporting apprenticeships, ACCA was one organization that might have benefited from the IRAP program’s third-party certifier concept and embraced the opportunity to do more for the industry in this area.

ACCA president and CEO Barton James sees the current bill’s focus as not taking full advantage of the resources available and also not casting a wide enough net.

In a recent email to ACCA members, Barton wrote that although the Department of Labor may “believe the HVACR industry’s training infrastructure is ‘acceptably robust,” he pointed to an ACCA member survey in which 90% replied that “the HVACR education system is not producing job-ready candidates.”

While Department of Labor data reports that 94% of people who complete registered apprenticeships “are employed upon completion, earning an average starting wage above $70,000,” access to such programs may not be readily available to all interested workers.

Barton reminded that “there are many technical education options that go beyond union-related apprenticeship programs” and encouraged the Biden administration to not only “keep an open mind” but to prioritize in-demand and essential industries like HVACR.

They may disagree on next steps, but proponents of both approaches have remained busy doing what they can do combat the skilled labor gap. 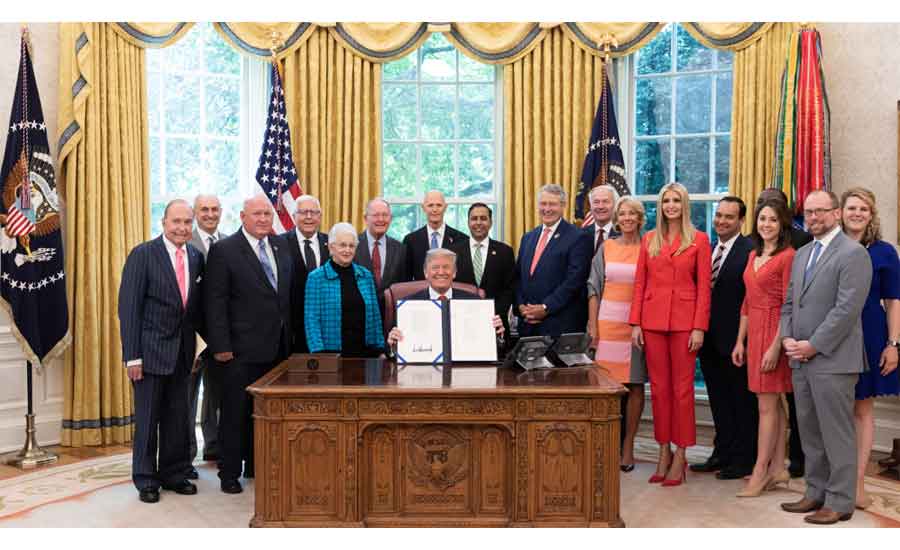 ALONGSIDE APPRENTICESHIPS: While President Trump’s effort to decouple apprenticeships from union coordination did not reach the HVACR industry, the overhaul and reauthorization of the Perkins Act in 2018 serves to boost avenues for technical training. (Photo Courtesy Office of Rep Glenn Thompson)

MCAA’s McNerney emphasized how the International Training Fund has helped programs adapt with tools such as internet distance learning, web training, and e-books. The ITF is funded by the Taft-Hartley trust, supported by collective bargaining funds, the UA, and local unions. Its target audience has included not only apprentices but trainers and members looking to expand their skills.

McNerney also highlighted MCAA’s Women in Construction initiative. Along those lines, one reason he likes the recent Apprenticeship Act is its effort to attract traditionally underrepresented parts of the workforce.

That goal also intersects with MCAA’s Veterans In Piping program, which does not deal strictly with piping.

“The military is the most heterogeneous workforce in the country,” McNerney said. “So if you’re recruiting from there, you’ve expanded your diversity inclusion exponentially.”

Veterans who have served since 9/11 have an unemployment rate of 11.2%, according to the VIP program, and the rate for 18- to 24-year-old veterans is nearly double that of those aged 25 to 34. Those statistics sit starkly against an aging HVACR workforce with a critical need for well-trained young talent.

The VIP program provides returning veterans with 18 weeks of accelerated training in either welding or HVACR. Its literature notes that in addition to the professional training, the process includes two additional weeks on the front end that deals with adjusting to civilian life.

VIP states that “the training is free to veterans who are placed in construction careers nationwide.” By the end of the program, a successful participant has earned multiple HVACR-related certifications, concluding with the student taking the UA STAR Light Commercial HVACR exam.

A typically full agenda continues at ACCA as well. James outlined a few projects and advocacy priorities in this way:

While James would like the current administration’s training focus to expand its scope of partners and tactics, he intends to continue advocating for increased funding at local, state, and federal levels.

In addition, his team continues to educate government officials and encourage education requirements that better reflect the needs and expectations of today’s employers.

Next Up: The Senate

Back in Washington, as of early March, the National Apprenticeship Program of 2021 waits to make its Senate committee debut. Timing any proposed amendments remain uncertain. So do its overall chances in a climate where more politically colored policy details can get in the way of otherwise shared objectives.

ACCA’s James closed his recent member correspondence with a reminder serving to motivate industry and government leadership regardless of party or affiliation.

“It is predicted that there will be over 110,000 job openings in the HVACR industry over the next five years,” he wrote. “This gap presents both a challenge and an opportunity. One this is for certain: It won’t close itself.”