In the midst of a workforce crisis, that news might normally warrant some excitement and closer scrutiny from HVAC professionals and their skilled trade cousins. However, one clause in the proposed rule stifles any such enthusiasm by exempting two notable groups: the military and the construction industry.

In short, the Department of Labor (DOL) sees these two sectors as not needing the help. 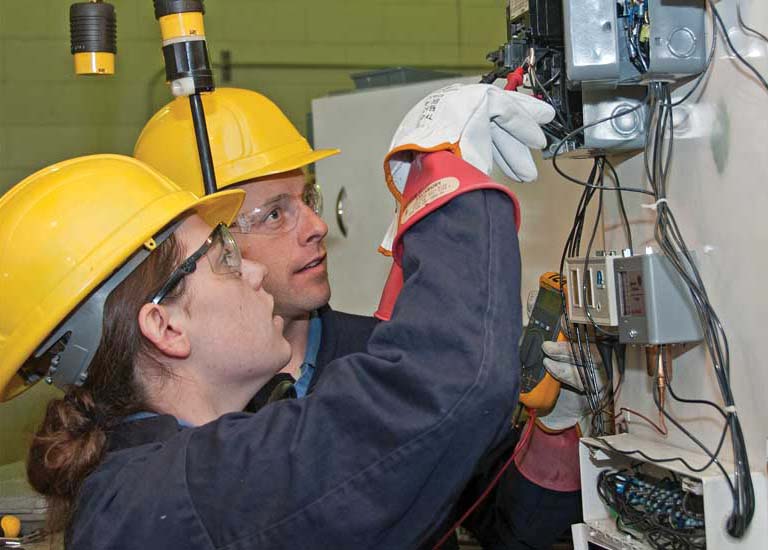 The proposed rule explains that the department “expects to identify the U.S. Military and construction as contexts where registered apprenticeship opportunities are already significant. Accordingly, the Department would not, at least initially, accept applications from SREs [Standards Recognition Entries] seeking to recognize apprenticeship programs in the U.S. Military or in construction.”

Elsewhere in the document, which was posted for public comment in June, the DOL cites data concluding that over a five-year period, the construction industry already boasts programs comprising nearly half of all federally registered apprentices. Those programs average over 140,000 apprentices per year, according to DOL figures.

LEFT OUT OR LEFT ALONE?

The public comment period for this rulemaking process elicited a strong response before it closed at the end of August. Groups representing different parts of the construction industry filed reactions covering the full spectrum of opinion about the wisdom of a construction exemption from broader apprenticeship programs.

ACCA would like the DOL to remove the construction industry from the exemption. While DOL data sees the HVAC industry’s training infrastructure as acceptably robust, Todd Washam, ACCA vice president of public policy and industry relations, cites his association’s internal survey results as a more pertinent representation of reality. 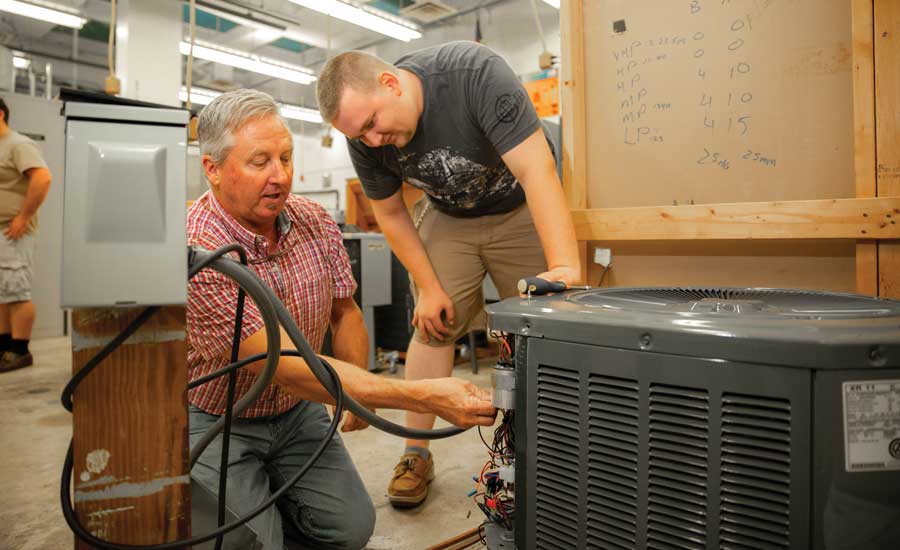 MAKING A CONNECTION: An instructor shares some instruction in the HVAC apprentice program at Santa Fe College, sponsored by the Builders Association of North Central Florida. Those who complete the 4-year program and are not currently employed in the field receive help from sponsoring contractors to find related work. PHOTO COURTESY OF MATT STAMEY, SANTA FE COLLEGE

“Ninety percent of respondents indicate that the HVACR education system is not producing job-ready candidates,” he said.

Echoing DOL assessments, Washam noted that an increasing number of companies are starting or enhancing their own in-house education and training centers to combat the problem.

ACCA’s vision for workforce solutions would go beyond encouraging that sort of member activity. If construction were not exempted, then ACCA could then qualify as an SRE and offer its own industry-recognized apprenticeship programs, Washam said.

ACCA president and CEO Barton James reiterated that workforce remains at the top of the agenda for the organization, and that the Trump administration has provided a welcome focus on skilled trades and addressing the skills gap. James sees an increase in ACCA member participation with trade schools, mentioning “signing day” for graduates and more support from teachers and parents in promoting rewarding careers within the industry.

“But there is more that can be done, and expanding the IRAP rule to include the construction trades would be another step in the right direction,” he said.

James and Washam emphasized that ACCA views its position on the IRAP rule as part of a larger agenda for solutions involving 529 savings plans and the White House’s training-based Pledge to America’s Workers. They encouraged contractors to participate, as ACCA works as a force multiplier to advance their interests.

On the other hand, the National Electrical Contractors Association (NECA) issued a swift and positive response when the DOL first announced its NPRM earlier this summer. Its assessment of the construction apprenticeship status quo aligned with the DOL characterization.

“There is no need to create a parallel program that would detract from our nearly 80 years of experience as the industry’s gold standard,” said NECA CEO David Long. He expressed concern that opening the industry to wider IRAP involvement could come at the detriment of proper oversight and transparency for such programs.

NECA’s submitted public comment encouraged the DOL not only to keep the proposed exemption in the upcoming revision but to go even further and permanently exclude the construction industry from such guidelines.

While NECA struck a laudatory note, the Associated General Contractors (AGC) set a more disgruntled tone just as swiftly at the top of its own statement: “Contractors Need Not Apply.”

“At a time when the vast majority of construction firms report having a hard time finding qualified workers to hire, it is deeply troubling that the Trump administration has opted to not include the sector in its new apprenticeship proposal,” said Stephen E. Sandherr, CEO of AGC of America.

“Instead of opening new routes for many thousands of Americans to embark on high-paying construction careers, the administration has instead opted to exclude one of the largest single sectors of the economy from what is supposed to be their signature workforce initiative,” he said.

Sandherr acknowledged that many paths into the industry exist, but pointed to obstacles including affordability and inflexible registration processes.

Regarding the department’s NPRM itself, AGC is displeased not only at the lack of what it sees as a “compelling” rationale for the exemption, but also that the DOL provided no concrete factors that the DOL might assess in the future with regard to allowing construction training programs into this kind of apprenticeship expansion.

Just before Labor Day, AGC released a construction industry study conducted with Autodesk. It found that 80 percent of construction firms are having trouble filling the “hourly craft positions that represent the bulk of the construction workforce.”

Labor shortages and ongoing demand have motivated two-thirds of participants to raise pay rates, the survey found, with 30 percent developing other incentives and bonuses. Along the lines of other industry comment, nearly half of respondents “have launched or expanded in-house training programs, with half getting involved in career building programs.”

Much of that may sound like basic good business sense and a first wave of free-market efforts to attract needed labor. However, while AGC touted apprenticeship expansion as one way the federal government can help, it named Pell grant financial aid eligibility as another policy area where it feels the government should take a step further. Community and technical colleges, the AGC observed, cannot currently offer Pell grants for students in construction-focused training programs.

In official terms, the DOL is revising 29 CFR part 29, Labor Standards for the Registration of Apprenticeship Programs. No hard timeframe exists for the DOL to review the submitted public comments or deliberate further. But at some point, the DOL will announce a final revision (or lack of revision) to the rules about who can operate an apprenticeship program, how they can operate it, and in which industries.

The bulk of comments refer to individuals’ successes in and support for the union-related apprenticeship programs they completed. Recurring positive attributes in the comments included the quality of the overall training, emphasis on safety, an adequate wage during the training so that participants could afford to finish the program, and the quality of life and employment that they have found as a result. These respondents reportedly work in trades including HVAC, electrical, and sheet metal.

It is worth mentioning that not all of these comments attacked the idea of expanding apprenticeship programs, per se. What they did do was extoll the strengths of the (often union-related) programs that they knew. The underlying and often explicit concern, however, is that opening the doors to a wider range of apprenticeship programs and programmers would dilute the quality of the average apprentice’s experience and skill set.

One more layer beneath that, the concern seemed to be that such a revision would threaten unions and the quality of work they encourage in a more fundamental way.

John McNerney, general counsel for the Mechanical Contractors Association of America (MCAA), set the current rulemaking process against a similar backdrop. MCAA filed comment with DOL in favor of the exemption, and in subsequent comment for this article, McNerney detailed his organization’s concerns.

Among MCAA’s reasons for opposing any effort to roll back the exemption, McNerney said that removing it would “flatly contradict the Blue Ribbon Task Force’s recommendation, and also would likely exceed the statutory authority of the Labor Department as well.

“Moreover,” he continued, “the political impact and fallout from that frontal assault on the premier apprenticeship system nationwide would be significant, to say the least.”

McNerney, whose association represents approximately 2,600 companies in HVACR, plumbing, and piping, also pointed to ways the current proposal does or could differ in practice from the Apprenticeship Task Force’s previous recommendations. At the top of the list is what MCAA sees as the potential for newly enabled IRAPs to circumvent process in traditional State Apprenticeship Council states.

MCAA understands the ongoing workforce shortage affecting the construction industry and others, McNerney emphasized. That said, he sees the DOL’s current IRAP-based proposal as “an expedient approach that offers a shallow panacea.” MCAA favors exploring workforce development reforms based on the Building Trades / employer joint workforce model as a better path toward long-term results.

As for removing the construction exemption — an idea McNerney sees as unlikely to succeed at present but likely to return — “It’s our view that there are many more constructive and far less controversial regulatory rollbacks the Labor Department could engage in that would be much more well received by the industry and labor and management together.”