Program aims at those seeking a new career

Decades of a college-for-all mentality has left the trades without workers and many young people without jobs. That’s starting to change. According to the American Association of Community Colleges, an increasing number of people with bachelor’s degrees are attending two-year programs, often to learn more practical skills such as HVAC.

But what about the folks who lack the time for even a two-year program? There is plenty of need in the HVAC business for those with a more limited set of skills. One HVAC contractor decided to create a solution to the worker shortage and help people looking for work in these challenging times.

Three evenings a week, Tim Merritt leaves his HVAC business in Burgaw, North Carolina, and goes to his second job at Cape Fear Community College. The owner at Tim’s Heating and Air Conditioning Inc. spends three hours teaching his students the basics of the trade. The class isn’t meant to create full HVAC technicians, but rather workers certified to help with installations and other jobs.

The class is broken down into four modules, each 96 hours long. The first module covers HVAC installation. At the end of that module, students can take the test for an EPA card. The second module covers ductwork, including how to size it, fabricate it, and put it together. At the end of this module, students can earn a journeyman card for ductwork.

The third module covers the basics of electricity. Merritt built an array of tabletop stations with relays and thermostats for these classes. At the end of this module, students can earn an OSHA 10 card. The final class introduces more technical skills, such as soldering and charging a system.

“In theory, if a student gives it 110% and takes all four modules, they should be able to tear a system out, build a duct, put it in a new system, and start it, with a little assistance,” Merritt said.

After Two Failed Attempts at Hiring An Instructor, He Took Over The Class

The program is Merritt’s brainchild. He had met Cape Fear’s dean through some community outreach programs and presented him with the idea. Merritt said high schools once offered this kind of basic vocational training, but now few do so. 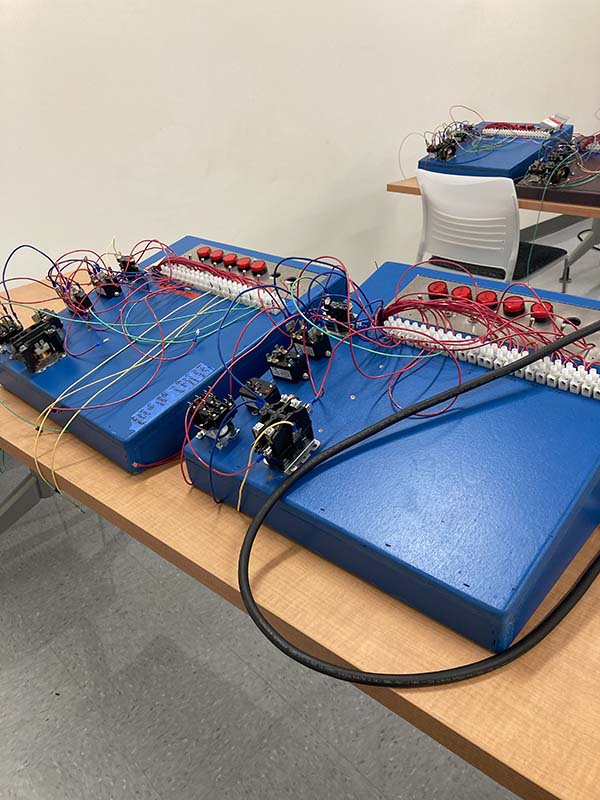 HANDS-ON LEARNING: Students at Cape Fear Community College learn how to handle the electrical aspects of an HVAC system on these table top units.

Merritt designed the course and worked with the school to find an instructor. Unfortunately, that person quit before classes started. A quick search found a replacement, but he had to quit after a few weeks for personal reasons. So Merritt decided to take over the teaching duties himself.

It’s not like he had a lot of spare time on his hands. Tim’s Heating and Air Conditioning stayed busy through the pandemic. And Merritt knows full well about the shortage of qualified workers, as he’s found himself short-handed for the last few years.

Tim’s Heating and Air Conditioning employs 30 people. The firm offers several services beyond commercial and residential HVAC repair and installation, including crawlspace encapsulation and propane-to-gas conversions. Merritt said he never had much turnover until a few years ago, when several older employees left the business.

“To find that caliber of employee is tough,” Merritt said.

The lack of employees costs the firm opportunities to grow. Tim’s Heating and Air Conditioning used to run five installation crews. Now it only runs two. Merritt tried all the usual methods, including running ads on employment sites and working with a recruiting company. Lately he’s been working with NCWorks, a state agency that pays part of an employee’s salary during training.

The lack of staff means Merritt wears more hats these days and spends less time with his children, a situation he wants to change. That’s starting to happen, with some recent hires looking very promising. Despite his already full schedule, though Merritt took on the extra work at the school. In the end, it helps his business, as well as the industry in general and the local community.

Merritt’s business and the school are located in Pender County, a fast-growing area with plenty of industrial employers. Many of those employers, however, laid off staff during the coronavirus pandemic. That’s what happened to Justin Lea.

Lea decided to take Merritt’s class in hopes of finding more stable work to support his girlfriend and their two young children. A friend who works in the HVAC business inspired him to enroll in the program.

“I’ve seen how his life has changed dramatically for the better,” Lea said.

Two months into the program, Lea felt he had proven himself and approached Merritt about a job. Merritt agreed that Lea had shown skill and initiative, so he took him on as an employee.

“He wouldn’t have taken a chance on someone with no experience unless he had seen potential,” Lea said.

Lea plans on continuing to pursue his training in HVAC. He enjoys the opportunity to work on different projects in different settings, something unavailable in a factory job.

Another student-turned-employee, Russell Willoughby, prefers the work environment HVAC provides over his last job at a fish house. Like Lea, Willoughby knew people in the HVAC trade and saw it offers more stability than he had. Willoughby likes the way he can bring questions from his day job to the classes at night. He recommends Merritt’s program for people who are interested in HVAC but unsure if it’s the right fit.

“This is a good way for people to come and get experience before they jump into the field,” he said.

Merritt agrees that spending time in crawlspaces and attics isn’t for everyone. He himself came into the business by an unusual route. His father owned an ice company. Merritt always enjoyed tinkering as a kid and soon started helping out the man his father hired to fix the ice machines. Before long, Merritt was driving around the county, doing work for the area farmers on their freezers and tobacco barns.

The ice machine repairman eventually moved to a heating and air conditioning firm, and Merritt followed him there. He started Tim’s Heating and Air Conditioning in 1992. Merritt has always worked several jobs and takes that approach his business, always looking for new lines of work. For example, he started working with a local utility a few years ago to retrofit homes to natural gas from propane. Merritt finds areas without a hook up to the gas line and then contacts the utility.

While he staffs up to hand off some jobs at his firm, Merritt plans to keep his teaching job as the next series of modules begins early next year. He’s come this far and wants to see it through.