The Visual Arts Building (VAB) at the University of Iowa is a marvel of both aesthetic design and mechanical engineering. Six years in the making and completed in October 2016, the award-winning, 126,000-square-foot structure blends the artistry of Steven Holl Architects (New York) with innovative mechanical systems that integrate with Holl’s aesthetics while meeting the numerous industrial-like requirements of this challenging space.

Thanks to these mechanical systems, the VAB is projected to consume 60 percent less energy than a building in compliance with ASHRAE 90.1. A verification report prepared by a local utility, MidAmerican Energy, converted that percentage into an annual cost savings of nearly $300,000. The utility calculated the final payback on the “incremental costs associated with energy conservation strategy investments” at just 2.1 years. For this project performance, the university earned an incentive payment of more than $550,000 for the building, which recently achieved LEED® Gold certification.

“Every time we talk about this building and the incredible level of system integration throughout the space, I’m amazed we pulled it off,” said Amy Infelt, P.E., LEED AP — and only half-jokingly. Infelt is managing principal for the Cedar Rapids-based Design Engineers (DE), the mechanical and electrical engineering consultant on the VAB project, for which she served as project manager.

The University of Iowa Visual Arts Building is projected to consume 60 percent less energy than a building in compliance with ASHRAE 90.1.

In her comment above, Infelt was specifically referring to the thermally activated slab (TAS) heating and cooling system her firm helped design with sustainability specialist Transsolar, a KlimaEngineering firm based in Stuttgart, Germany. Providing baseline comfort for the five-story structure, this six-level slab system incorporates 67 miles, or more than 353,000 feet, of ⅝-inch Wirsbo hePEX™ tubing, manufactured by Uponor North America.

Infelt could just as easily have been referring to the bubble-deck structural slab itself. The VAB is one of the few buildings worldwide to integrate TAS with void slab construction.

Several other innovations Transsolar brought to the project included:

Each of these items is intended to maximize the transmittance of light into the interior while minimizing heat gain or loss.

The VAB is more than a building of offices and classrooms. It is also an active collection of studio-art workshops. Hence, on top of aesthetics and efficiency goals, mechanical system designers had to accommodate 10 different dust-collection systems, pulling exhaust from woodworking and metalworking shops; a kiln room with seven industrial-grade kilns; a sculpture studio with a forge and a crucible furnace; an acid room for print-making; plus various studios for ceramics, painting, welding, and plasma-cutting — even bicycle-building.

In sum, the mechanical systems in this complex space had to maximize occupant comfort and productivity as well as overall system efficiency.

Among the highlights of the VAB, none is more architecturally striking than its atrium, spanning the entire 150-foot depth of the five-story structure and extending 70 feet vertically. Ductwork, piping, and conduit for mechanical, electrical, and plumbing systems are typically concealed above the ceiling in commercial buildings. But the VAB has very few ceilings, and the design intent was for the atrium to remain clear of any exposed MEP systems. Everything is fully exposed through the rooms surrounding the atrium, including ductwork mains routed through a tunnel below the atrium. That meant its thousands of feet of piping and conduit had to be meticulously coordinated, so that systems were arranged in fastidiously neat and precisely parallel runs, rather than the less rigorous style of most above-the-ceiling construction.

“We created what we called ‘utility routing zones’ — specific areas within each room through which all ductwork, pipe, and conduit could be routed, with a special hanging system for each zone,” explained Infelt. “We even coordinated how the piping and conduit were identified and labeled. All the systems are labeled with the identification in the same color and with identical graphics: black letters on a white background.”

The installation of the thermally activated slab heating and cooling system required close coordination. In part, that’s because the slab itself is not solid concrete but what is called voided biaxial slab, or bubble deck, construction. 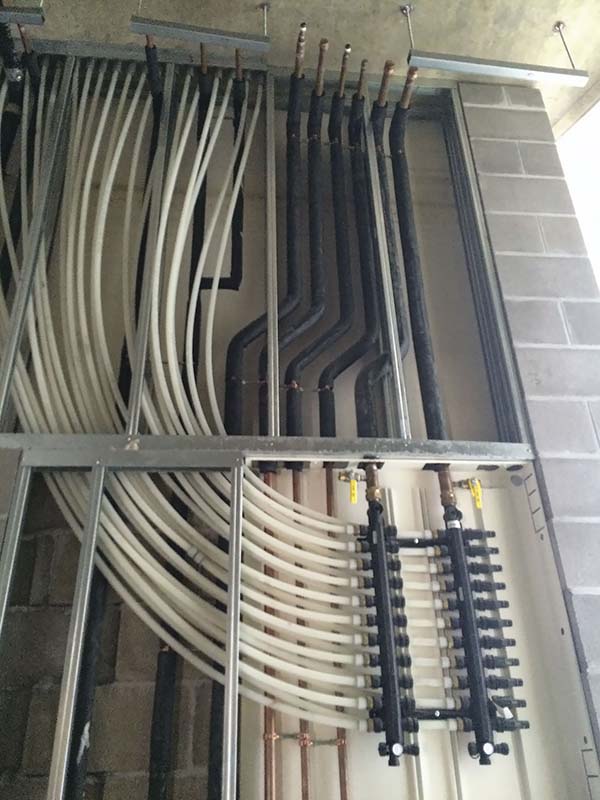 The PEX tubing was routed out of the six slabs through 71 different manifold cabinets with 634 circuits, or loops, of Wirsbo hePEX from Uponor.

The VAB bubble deck consists of hundreds of empty, but watertight, plastic balls — or the preferred term, “voids” — 7.5 inches in diameter and sandwiched between layers of crisscrossing rebar. All of it was buried in 12.5 inches of concrete, along with the Uponor Wirsbo hePEX. But creating a special challenge for DE and the installing contractor, the Wirsbo hePEX had to be looped carefully into the slab in a way that avoided the voids.

The rationale for this type of slab is straightforward enough: All those spherical voids allow for less concrete to be poured without lessening the thickness or sacrificing the integrity of the slab itself. Less concrete means a smaller load, which in turn permits weight-bearing column spacing to be far wider — a critical need inside the expansive atrium.

Inside the VAB, which uses TAS construction on six different levels, “the system allows you to provide cooling in a way that keeps the slab surface temperatures above the point where condensation is produced,” said Infelt.

“What makes a TAS different is its use of the full concrete mass to store its heating and cooling longer,” she continued. “The six slabs at VAB contain no insulation, so a portion of the energy radiates upward. But the Wirsbo hePEX is positioned ⅝-inch from the bottom of the slab. As a result, most of the radiation is downward, conditioning the space below.”

Radiant was an obvious fit for the new VAB with its large, loft-like, atrium space. Of particular value were the thermal modelings on the heating and cooling capacity of the slab, performed by Uponor sales engineer Him Ly. Using the slab depth, the tubing diameter, the depth of the Wirsbo hePEX inside the slab and the temperature of the water moving through the tubing, Ly calculated how many heating or cooling BTUs per square foot the slab could provide and what supplemental systems were needed. 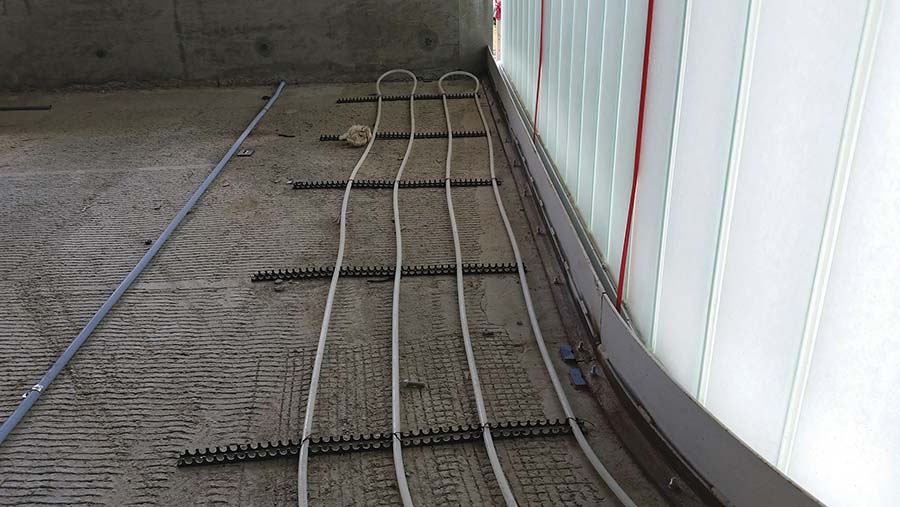 Wherever insulated channel glass has been installed around the exterior, a 3-foot-wide strip of Wirsbo hePEX from Uponor was installed inside the 3-inch topping layer that sits on top of the structural slab. Controlled separately from the thermally activated slab system, this perimeter radiant install provides heating during only the colder months. It shuts down in the summer.

“All the tubing was pressurized, and each of the 71 manifold cabinets was equipped with its own pressure gauge for its particular set of loops,” Infelt explained. “Once in the morning and once at the end of the workday, the installation team would inspect each of the 71 gauges, comparing the two readings. Wherever there was a pressure drop, the contractor knew something happened that particular day to damage the tubing. Doing these inspections daily made it easier to isolate and immediately fix any problems.”

The VAB TAS is a “passive” system with minimal active control, whose mass can be counted on to retain heating or cooling capacity over long periods. But that consistency also prevents it from reacting quickly to changing loads — such as student/faculty movement in the building, processes taking place in the workshops, and outdoor weather extremes.

“The capacity of the slab to heat or cool is what it is — a constant,” said Infelt. “That is why we designated it the baseline heating and cooling system for the building. We then created extra heating or cooling capacity with our supplemental systems, which can react more quickly — and actively — to changing loads.”

Outdoor and exhaust air systems: Because of the number and type of industrial processes that occur inside the VAB, a considerable amount of makeup air from the outside is required for both replacement and ventilation air. This outdoor air is pretreated by a custom air-handling unit (AHU) that maintains separate air streams: one running through a total energy, desiccant recovery wheel; and the second, through a sensible heat pipe.

Located in the VAB’s lower-level mechanical room, the AHU pulls heat from some of the building’s exhaust before expelling it outdoors. At the same time, the air handler transfers that recovered heat to the incoming outdoor air before it moves into the building. This transfer is done through a slow-spinning desiccant wheel, handling the incoming interior exhaust on one side of the wheel and outgoing outdoor air on the other.

Exhaust from the various industrial processes, of course, is smelly, dirty, and not safe to breathe; therefore, instead of moving through the wheel, it routes through the refrigerant-charged heat pipe, where its heat is recovered and transferred to the incoming outdoor air.

Fan coil units: These units provide supplemental heating and cooling where the demand is beyond the capacity available from the TAS and the ventilation air system.

Radiant heating, installed in designated places on the building perimeter: The TAS structural slab at the VAB is covered by a 3-inch-thick topping slab. Wherever insulated channel glass has been installed around the exterior, a 3-foot-wide strip of radiant heating was installed inside the topping layer. Controlled separately from the TAS system, this perimeter radiant install provides heating only during the colder months, shutting down in the summer. No insulation is used, because the 12.5-inch structural slab directs all the heating upward, where it is needed.

Single-zone displacement ventilation system: This energy-efficient system serves the 76-seat classroom by supplying air at a low, quiet velocity. The desired comfort temperature where students and faculty congregate at floor-level (the “occupied zone”) is maintained, while the airspace is permitted to become progressively warmer toward the ceiling.

What drove all this innovation? The university had set “very defined objectives for energy efficiency and energy consumption-reduction,” Infelt said. “Their focus is to design buildings for the lowest energy costs for the long term.”

Post-construction tests have yet to be run, comparing the actual performance of the VAB with its ambitious, 60-percent savings target. But Infelt reports that the UI Controls and Maintenance Group, which is responsible for the building’s operation, has found the TAS and its supplemental HVAC systems to be “very robust, providing a very comfortable environment for the occupants.”

John O’Reilly is the owner-founder of GreenHouse Digital + PR, an independent Chicago area-based marketing communications agency that specializes in serving building-product manufacturers in the HVACR and plumbing industries. Contact him at john@greenhousedigitalpr.com or at 847-987-4479.