This website requires certain cookies to work and uses other cookies to help you have the best experience. By visiting this website, certain cookies have already been set, which you may delete and block. By closing this message or continuing to use our site, you agree to the use of cookies. Visit our updated privacy and cookie policy to learn more.
Home » Q&A: Is HVAC Company Ownership for Everyone?
NewsBusiness ManagementHVAC Residential MarketHVAC Light Commercial Market

Q&A: Is HVAC Company Ownership for Everyone?

Chris Hunter is the newly appointed director of customer relations at ServiceTitan, where he helps contractors become successful owners. Hunter, who recently sold his own HVAC company, has been working in the industry for years. He was invited to the team to help contractors be successful as business owners and accomplish this feat on a repeatable scale. According to Hunter, ServiceTitan has made a huge push to really give a voice to the contractor inside the service business and has since seen a strong move in customer sentiment.

“This was something that appealed to me, because I've been on the journey of owning a business and benefitted from the blessing of being able to sell it,” he said. “This new adventure is about how can I make the biggest impact in this industry, because I saw what it did for me, and I would love to be able to help others do the same.”

The ACHR News: What made you want to progress beyond technician to becoming an HVAC contractor owner?

Hunter: It all started with me in high school and the year I went to an HVAC class. I never really planned on doing that, but this is the beauty of learning a trade — no one can take that skill away from you, and you never know when you may need it. Right out of high school I went to work for AT&T in their communications department. After 9/11, a large round of layoffs left me with a choice: Get laid off or take the opportunity to stay working for AT&T and become a technician. They basically gave me all of southeastern Oklahoma, a credit card, and a truck. Then they said, “Here's the deal — our equipment cannot break down. If it does, you have to fix it within two hours. If you can't, you've got to set up a temporary system to keep this equipment running so we don't lose phone service.” This situation gave me that desire to constantly learn. I had to figure out how to fix these things and to navigate customer service. I had to do whatever it took to make sure that I got there and got the equipment running.

The ACHR News: What does it take to be the owner of a company?

Hunter: I've got really three main focuses on becoming an owner. Number one is a sincere desire to help others. If you go into this thing selfishly, it's never going to work. Number two, there must be a commitment to always be learning. Number three, grit. I'm telling you, you're going to get punched, you're going to get hit, you're going to get knocked down, but you're also going to have strength like you never even believed. So, you've got to have thick skin and grit and be able to power through. Let's face it, there is no off switch when you become an owner of a company.

The ACHR News: Once you decided that you wanted to be an HVAC owner, what kind of process did you have to go through in order to get into ownership?

Hunter: When you mentally make that decision, I think you need to really develop why you're doing this. Decide what the mission and the vision of the company are going to be. That's what's going to help you power through when you do run across problems and challenges. Next are the basics. You're going to have to go and figure out all the licensing for your local city and state. This can be a daunting task. Licensing, insurance bonds, and all the legalities of starting a company should be investigated and understood.

The next step is really the financial readiness and understanding what that's going to take.

We hear stories all the time about people with barely two nickels to rub together trying to get started, but let's be real. You're going to need a truck and a brand, you're going to have to wrap that truck, and you're going to need to set up all your accounts with your vendors. There’s also the need for a website, software, and social media. I suggest starting a checklist of items that need to be done and seeking the counsel of other owners.

The ACHR News: If you had to do it all over again, what would you change in the process of going from HVAC employee to employer? 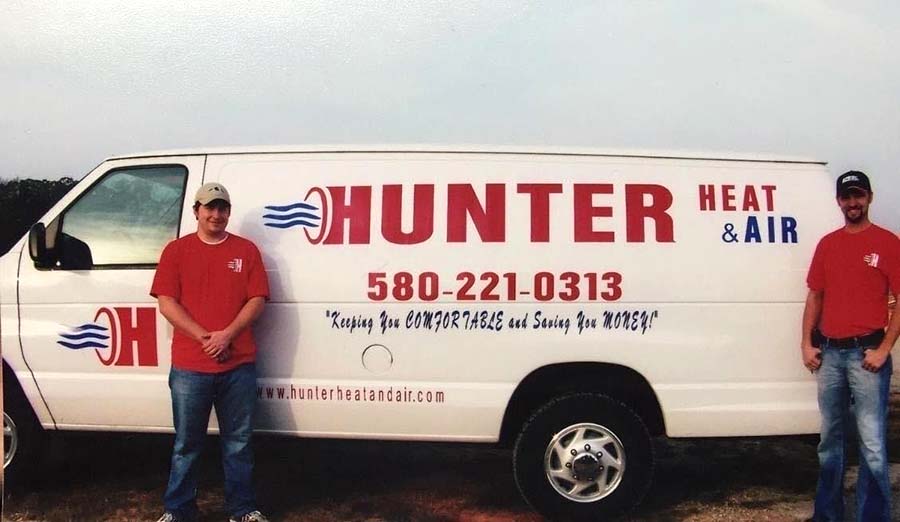 Hunter: I knew influence was important, but I just didn't realize how important. So if I had it all over again and I wanted to grow my company even faster, I probably would have went to my target area and found the influencers and the people in the communities that knew people that really had a lot of influence. And I would even offer them a chance to invest in my company, even if it was a small amount, because influence is king. And we're in a relationship business, a people business, so why not start with some people that have great influence? No. 2, I would have started sooner with a best practice organization, and would have saved a lot of headaches. Having proven processes and systems in place right off the bat would have saved me so many headaches and probably shaved a couple years off of what it took to grow my company. I didn't start really getting into best practices until 2012. To give you an idea of what that meant financially, between 2006 and 2012 I went from zero to right around $2 million. Then after implementing best practices, my business grew from $2 million to $10 million between 2012 and 2018.

The other thing is I would have invested much more time into myself and my understanding of financials. When I started, I had no clue about financials. I was great at customer service, but I didn't know anything about numbers, benchmarks, KPIs, cash flow statements, or profit and loss. I just knew how to serve people, and that was it. I probably would have also looked closer at buying an established company instead of starting from scratch. I'm seeing so many other people do this now, and it's like getting a huge head start.

The ACHR News: What other advice you would give to those HVC technicians out there that are working on their career path and maybe considering ownership?

Hunter: Count the cost, because this journey is not for everyone. So many people think that because they're good at their craft that they need to go start their own company, but here's what happens. You're really good at your craft, then you go start your own company, and next thing you know, your role has nothing to do with your craft. Your career goes from being a great technician solving one problem at a time, to all of a sudden having to manage things like billing, marketing, payroll, people, processes, software, rent, human resources; and before you know it, you spend the majority of your time doing nothing that was really like why you started in HVAC in the first place. So count the cost.

My second piece of advice hinges on investing in yourself. You can't give what you don't have. I had to give up a lot of things that I enjoyed, like television, to make the time to become a better business person. You're going to have to give up to go up.

The ACHR News: Turning back to your new career at ServiceTitan, how does the company help owners be successful?

Hunter: ServiceTitan has made the process of leading a fast-growing company possible without having to compromise and miss out on things that are important outside of the business, like family. I began using ServiceTitan while I still owned my business, and instead of having to go back to the office to access software for numbers and data, I had the freedom to stay on top of my business from my phone. I was no longer tied to the office and could now go on vacations or to ball games and spend more time with my family. This was just one tool, and this team I am on is here to help contractors leverage all of the company's tools for success whether they are just starting out or have been in business for years.