Contractors discuss what helped them make it in the geothermal market

Success as a geothermal contractor comes in many forms — much of it hard work and smart decisions. Contractors like Frank White, CEO and president of Metro Mechanical Inc., Bolton, Mississippi; and Dan Ellis, chairman of Comfortworks Inc., Oklahoma City, Oklahoma, have both invested hard work, smart decision-making, and a lot of ingenuity into their successful experiences with geothermal. To help other contractors working in geothermal or interested in starting into this market, White and Ellis took some time to share key components and innovations that helped them get to where they are today.

GETTING THE LOOP IN THE GROUND

The geothermal loop, be it vertical drilled or horizontal trench, is a specific skill set that requires knowledge, equipment, and a full understanding of how it works. For many contractors, this loop can be a blocker for their geothermal aspirations. But Ellis reminds contractors all the time that drilling for the loop is not typical HVAC work.

“We used to actually own our own drill rigs that we bought in 2007,” said Ellis. “As we took off and started growing, we just realized that drilling is a completely different kind of animal to try to manage.” 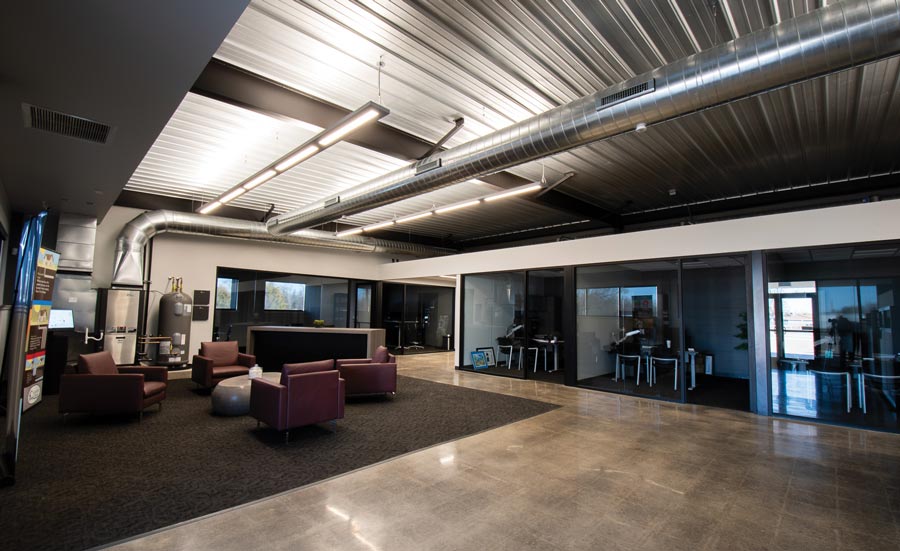 ON DISPLAY: All the mechanical systems at ComfortWorks Inc. are completely exposed so that customers can see the ductwork, the equipment, and the piping.

He explained that the company’s drill equipment required a facility that had a tall bay where the rigs could be pulled in for maintenance. There was also a need for a crane to safely complete the maintenance. Then, Ellis had to hire people and train them on how to use and maintain every piece of owned equipment.

From this experience, Ellis learned that a good working relationship with a drilling company could make all the difference in the geothermal business.

From there, Comfortworks formed a relationship with a local drilling company that was installing a lot of underground piping, although none of it was for geothermal. Through partnership and communication, the company became the prime driller for Comfortworks, removing that side of the business and all of its loose ends.

“We ultimately sold them our installation capacity on the drilling side and just have a very strong working relationship,” said Ellis. “We pursue work in the market together, and it’s been a great thing. So I would say any contractor, to be successful, has to have a good relationship on that loop side.”

White agreed with Ellis about having a good drilling team either on staff or in partnership, but he also recommended that successful geothermal contractors take care to become well-informed and well-trained themselves. 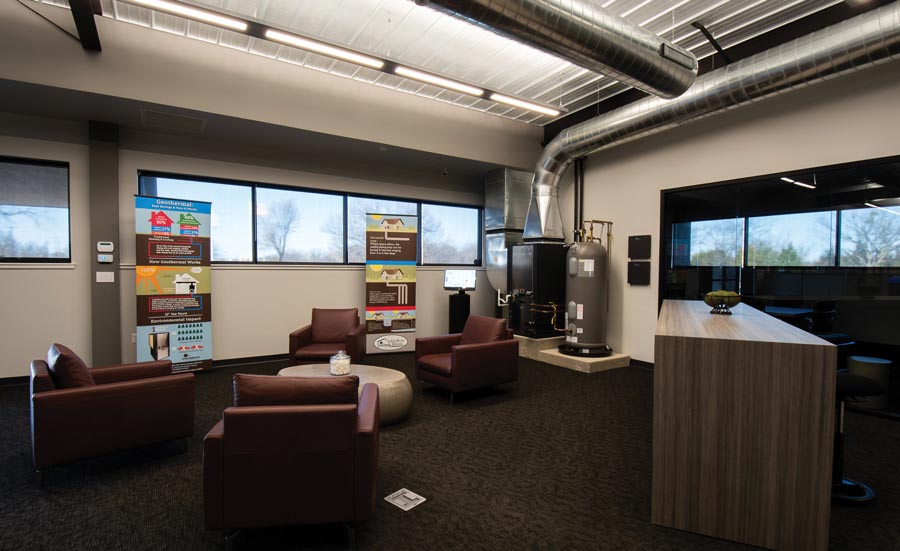 GROUND LOOPS: The ground loops that feed these pieces of equipment may be out of sight, but understanding the water going through them is as important as understanding the unseen refrigerant circulation of conventional systems.

According to Ellis, well-trained does not simply mean a basic understanding of hydronic systems. In fact, he said that the successful geothermal contractors are the ones who can take the geothermal heat exchanger from where it enters the building and properly finish the install from there.

“Your technicians need to be able to finish the piping, take care of the pumping, and address the air purging and flushing of the system,” Ellis explained. “I don’t mean just that some designer or sales guy who understands it lays it out — your service techs all need to understand it. They have to you know what’s different about geothermal air source, air to air, or that there is water circulating in this closed system that they can’t see in there and see what’s going on.”

He compared the confusion of the unseen water to the initial comprehension problems that technicians can have with the unseen refrigerant circulating through conventional systems.

“It’s really no different,” he said. “Once you get the hydronic side down, geothermal becomes highly efficient.”

“I see geothermal standing on its own two feet ... When you look at the long-term energy savings, geothermal is good for the pocketbook and good for the planet.”
— Frank White
CEO/president, Metro Mechanical Inc.

Concentrating on larger commercial installations, Metro Mechanical has been involved with geothermal for about 10 years. Five years ago, the company did its first larger project — a 50,000-square-foot, four-story office building.

“It worked phenomenally, and from there, we just continue to grow,” said White. “Every one of our jobs in geothermal now are million dollar plus.”

He has invested in an innovative hybrid systems that combines geothermal wells with a cooling tower or a fluid cooler for partial cooling. They are doing one-pipe systems, where there is one pipe running around the building instead of two pipes. This cuts down on cost, which White said is one of the first things that customers want to know about.

“You have to find ways to make the upfront costs manageable so it’s worth the payback, and we’ve done that,” he added. “We did that by looking at cost and finding savings by using this one-pipe system that includes the hybrid design with a cooling tower. It makes the system cost-effective and still achieve energy savings for owners.”

Outside of upfront costs, many of those in the geothermal market consider lifecycle cost as well as the effect of the system on their carbon footprint and commitment to green energy.

“We are delivering something that is good for the earth and for our future, not just saving upfront costs and providing energy-efficient comfort,” said White.

He and the Metro Mechanical team are planning that these hybrid systems could be 10 percent or more of the overall business going forward. The company has already done work for some school districts and is exploring work opportunities in large multi-state banks, an 82,000-square-foot bank headquarters, and community colleges.

“I see geothermal growing more and more,” said White. “I see it standing on its own two feet without the tax credits because when you look at the long-term energy savings, geothermal is good for the pocketbook and it’s good for the planet.”