HVAC firm wants staff to ‘Do the Right Thing’

Chesterfield Service, a 44-year-old family-owned HVAC contractor in Chesterfield, Missouri, received a Torch Award from the St. Louis Better Business Bureau (BBB). The award recognizes companies committed to exceptional standards for ethical business practices and service to customers, employees, suppliers, and communities. Previous winners of the Torch Award serve as judges and choose the recipients of the award each year.

The Torch Award marks a significant achievement for brothers Chris and Travis Seeger as they guide the company their father, Charlie, started in 1976.

At that time, the area he served was on the outer edge of the St. Louis suburbs. Charlie Seeger was doing mostly appliance installation and repair, with some HVAC business on the side. Chris and Travis Seeger were growing up on a farm, spending plenty of time together and listening to their dad talk about how he’d helped people that day. Today, the brothers joke about their dad’s dedication to his job.

“He worked half days — nine in the morning until nine at night,” Chris Seeger said.

Chris and Travis Seeger helped around the shop as teens, and Chris joined as a full-time employee in 1986, just as his dad was expanding the firm’s heating and cooling business. Travis Seeger came on board in 1990. The pair worked as technicians and installers for years.

In 1999, Charlie Seeger underwent back surgery and, consequently, found it hard to perform physical labor. The brothers started to transition to ownership in 2007 and bought out the company in 2009, just in time for the worst economic downturn in years. They went down to 12 employees from 32 when they took over in 2007.

At the time, Chesterfield did as much installation as service work, but nobody was building new houses.

OWNING A BUSINESS, NOT A JOB

In response, the brothers shifted the focus to service. The Seegers also sought out more training for themselves. They signed on with Business Development Resources (BDR), provider of business and coaching services to HVAC contractors — and soon learned how much they didn’t know, despite growing up in the business.

“They got us to act more like business owners rather than people who owned their jobs,” Chris Seeger said.

The Seegers continue to seek ways to improve the business. One recent move was hiring a social media marketer who started promoting the company. Chesterfield maintains a robust website and social media presence. The firm is active in soliciting reviews, averaging 7-14 a week. They make sure the reviews posted on the website are all current.

In 2019, the Seegers added plumbing to their offerings.

“We were handing away way too much plumbing work,” Chris Seeger said.

Chesterfield employees try to get three crossover referrals every day from their HVAC, plumbing, and appliance customers.

Chris and Travis Seeger try to operate their business in an ethical manner, as reflected by their mission statement: “Give exceptional service, honor God, and serve people.” The Seegers also have a value statement for Chesterfield: “Do the right thing.” This is a value they spread through the company and use to empower their employees. 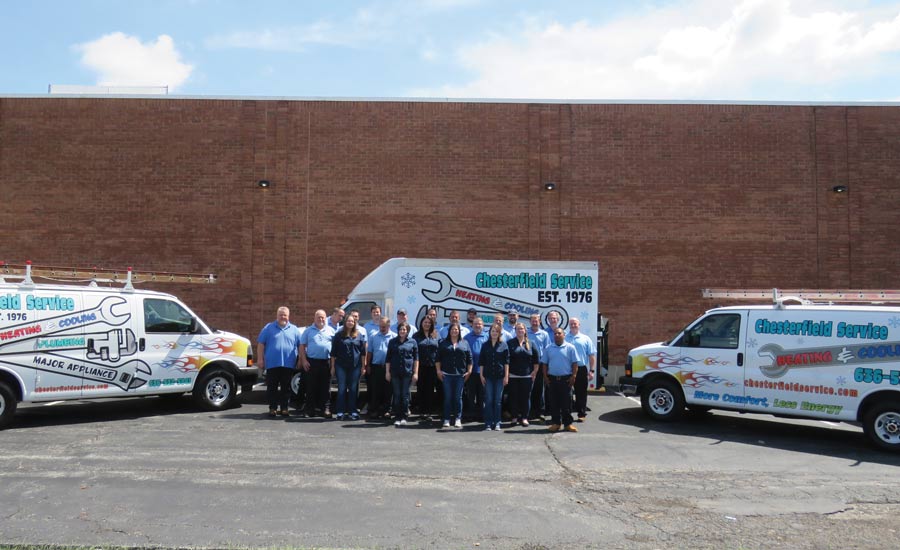 COHESION: The staff at Chesterfield Service stands in front of the company’s fleet of trucks.

“That makes life a lot easier,” Travis Seeger said. “It prevents a lot of messes when people on the front line can make a decision if it’s the right thing to do.”

Shaun Malaway is one of those employees. He’s been with Chesterfield for 13 years, since the Seegers gave him his break in the business. He’s a service manager today, although he still goes out on calls. He said the Seegers take good care of their employees, offering bonuses and scheduling flexibility. They also work with their employees on their goals and expectations. There is regular training, which consists of over 100 hours of classroom, hands-on, and safety training annually. There are also quarterly events that are just for fun.

Jessica Kralemann joined Chesterfield as office manager in April after working in the service industry for several years. She was attracted to the company in part because of its longevity. Kralemann said she found the Seegers to be very caring employers.

“They make sure they think of their employees before anything else,” she said. “I wouldn’t want to work anywhere else after working here.”

Travis Seeger’s oldest son, T.J., is now one of those employees. He came to Chesterfield after working for a few years for an electrician. Travis Seeger wanted T.J. to have experience outside the family business. Once he joined his dad, T.J. started like everyone else, working as a parts runner.

“You’ll figure out in 60 days if you fit in the culture,” Chris Seeger said.

Travis Seeger, co-owner, Chesterfield Service, said that a good attitude is more important than technical skills. A technician who can fix anything but won’t deal with people is the wrong fit for a residential firm like Chesterfield.

“If you’ve got a bad attitude, you can’t fix that,” he said.

Travis Seeger said a good attitude is more important than technical skills. A technician who can fix anything but won’t deal with people is the wrong fit for a residential firm like Chesterfield.

“If you’ve got a bad attitude, you can’t fix that,” he said.

Both brothers are heavily involved in local high schools and trade schools to attract new people to the business. They try to spread the message of the company. Their philosophy is that if they pay employees well and treat them right, people know it.

In addition to the BBB award, Chesterfield has earned several industry recognitions over the years, including the Medal of Excellence and the Circle of Champions from Bryant. The Circle of Champions is for Bryant dealers who have made a commitment to excellence in their businesses through focus, determination, and leadership. The medal honors Bryant dealers who exemplify quality, satisfaction, and performance in their businesses. Chris Seeger said all these honors mean a lot to him.

“It’s other people saying, ‘These guys walk the talk,’” he said.

Some people wonder how two brothers can work together for all these years without major conflict. Part of it is they complement each other’s strengths. Chris is more of a big-picture thinker, while Travis focuses on day-to-day operations. And they always hold each other accountable while supporting the other at the same time.

“He’s always on my side,” Chris Seeger said of his brother. “I know I can count on him.”