Early on in Community Housing Partners’ (CHP’s) $9-million, 72-unit Apartments at Kingsridge project in Richmond, Virginia, the project team decided to make a pretty big change: an overhaul of the HVAC design.

As Jimmy Holland, P.E., explained it, CHP ownership was “coming off the heels of a very similar sized project just north of Richmond with 1.5- to 2-ton systems and a host of moisture management problems.”

Holland worked with CHP at the time of the Kingsridge project and is now vice president and senior project manager for Peacock Holland Construction LLC in Blacksburg, Virginia.

The previous multifamily case had wound up with oversized heat pumps, pulling insufficiently conditioned air into the interior. At the suggestion of architect Colin Arnold of Arnold Design Services, the team convened and put their heads together. The goal was to craft a plan for eliminating unnecessary and costly troubleshooting without sacrificing the project’s performance, health, and cost goals.

“Each supply takeoff is balanced with a volume damper, and ERV supply and exhaust are balanced using IRIS dampers,” Holland wrote of the result. “Overall cfm are based on actual calculated loads (300-400 cfm). A ‘standard’ 24x12 return with modest airflow keeps velocities slow across the indoor coil, ensuring dehumidification actually occurs.”

The MD33 model selected offered up to 33 pints of water removal daily and a tamper-proof cover, but since it serves up to 1,200 square feet, it is also sized with multifamily settings in mind.

Here is where the design gets more unusual: no bathroom exhaust fan. Instead, they deployed an exhaust pipe from the ERV.

“Likewise,” Holland continued, “the fresh air drawn from outside was ducted to the ERV and then from the ERV to the return plenum within the mechanical closet. ERV exhaust was then ducted outside. The dampers were dialed in to ensure a balanced ventilation condition.”

FITTING IN AND WINNING OVER

The recurring question then became how the new design would affect installation, expense, and approvals. According to Holland, the cost and the work required both remained comparable.

“The beauty of the selected equipment is that many aspects of the installation are comparable to conventional systems,” Holland said.

Static pressures were generally lower, he recalled, so the duct sizes “are often a bit smaller, which works well in multifamily high-performance building, where insulated duct is a necessity and room for ducts is always a premium.”

John Semmelhack, project team member and owner of Think Little in Charlottesville, Virginia, is a passive house expert and certified HERS (Home Energy Rating System) rater who does home performance consulting and contracting.

“The ERV ducting (outside air and exhaust air) is just slightly more complex than typical separate bath exhaust fans and outside air duct/damper,” he said. “On the other hand, our compact duct layout yielded significant labor savings compared to a traditional layout with registers located at the perimeter.”

The in-wall dehumidifier installation, he added, is quick. 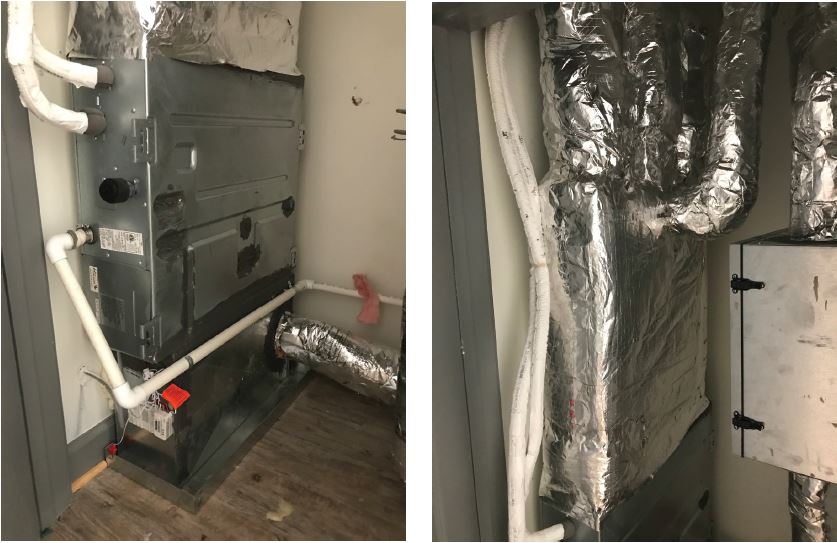 TIGHT FIT: Once the team sorted out the best way to configure the equipment for maintenance within each unit’s mechanical space, installations did not take longer than traditional systems and moved along on schedule.

While the dehumidifier is located down the hall in these units, the design did make things tight in the mechanical closets. Routing ducts and linesets while leaving room for maintenance proved challenging but not impossible, Holland said.

“In short,” Holland wrote at the time, “we are implementing what should be one of the healthiest HVAC and ventilation systems we’ve ever undertaken — air filtration through the MERV 13 filter, continuous exhaust in the bathrooms, dehumidifiers (or rough-ins), and a ducted mini split system sized appropriately for the loads all contribute towards moisture and indoor pollutant management.”

As it turned out, he said, the biggest challenge awaited in working with building inspectors who had not encountered this system and definitely were not accustomed to a lack of bathroom exhaust fans.

“This took a number of conversations, site meetings, and code investigation to demonstrate our compliance,” he recalled. But once everyone got over the learning curve of the best way to configure the mechanical closet, the team did not experience any significant delays.

The opportunity to get full pricing quotes for both the original and revised system designs gave Holland a true apples-to-apples comparison, he recounted.

“There is no premium for the revised system,” he noted. If anything, he said, the new system allowed the team to “shave a modest amount from our overall cost.” Holland attributed this to reductions in bulkheads, the smaller ductwork, the bathroom fan elimination, and other details successfully offsetting some equipment premiums associated with the actual system.

The project had to get through commissioning before occupancy. Semmelhoff’s skill set allowed his team to make sure the ducts were sufficiently sealed, takeoffs balanced, and that the dehumidification and ventilation had been dialed in to work as designed.

In a couple of instances where a wire was loose from transit or somewhere else along the line, the Ultra Aire units provided a specific error code that allowed the team to diagnose and adjust ahead of residents moving in.

CHP ran some preliminary spot checks of relative humidity in the first summer for the systems. Those checks found that the units with dehumidifiers experienced target rh levels — approximately 50 percent during the Virginia summer heat.

Airflow balancing finished in November 2018, and residents moved in not too long afterward. Semmelhack said that CHP ran some preliminary spot checks of relative humidity in the first summer for the systems. Those checks found that the units with dehumidifiers experienced target rh levels — approximately 50 percent during the Virginia summer heat.

Think Little helped CHP to install energy monitors and temperature/humidity monitors in the fall of 2019, so this summer will be their first in action. However, anecdotally speaking, Holland said that from the contractor to mechanical designer to architect of record, he had heard nothing out of the ordinary regarding complaints or service calls.

TWEAKS AND AN ENCORE

As with the building inspectors, one task in ensuring this particular system works as intended is education, both for apartment residents and maintenance staff. 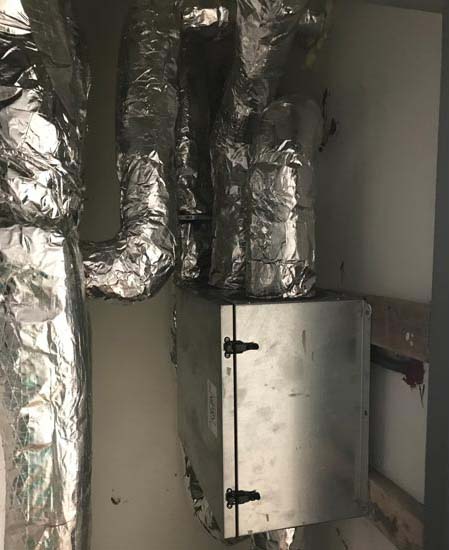 NO BATHROOM FAN: The energy recovery ventilator did heavy lifting in a small space, with the supply (bottom) and then bathroom exhaust and outside air connections across the top.

Semmelhack mentioned that the ERVs require regular filter changes (on the same schedule as the heat pumps), and the in-wall dehumidifiers require periodic cleaning of the washable filter. Semmelhack recalled that staff needed some additional information about the filter change requirements, with no further issues to his knowledge on that front.

More of a hurdle was residents’ acclimation to systems turning on and off occasionally.

“We initiated a pre-occupancy briefing in an effort to teach residents about the energy efficiency (and health benefits) of the installed system,” Holland said. “To be effective, this knowledge transfer has to pervade the culture of a multi-family developer/operator.”

Having pulled off a successful and fairly innovative redesign without sacrificing quality or cost, the team considered the question of what it might tweak in a similar situation in the future.

Semmelhack responded with the maintenance realities of a multifamily setting in mind.

“We would like to switch to a more traditional air handler design with all service access points from the front of the unit, in order to make installation and future maintenance of the heat pumps as close to ‘business as usual’ as possible,” he said.

“This type of air handler for 1-ton capacity mini split heat pumps wasn’t available at the time of design and construction, but they are available now, so we’re trying to work them in for future designs.”

Holland also mentioned the possibility of shifting to in-line dehumidification in the future, although the MD33s have performed as designed thus far, and he noted their attractive price point as well.

The only significant alteration for the second phase of Kingsridge units was to place the ducts within the floor truss cavity and install fire dampers at ceiling penetrations. The team had experienced some scheduling issues in the first phase, with ductwork installed below the floor trusses.

According to Holland, CHP is in the process of doubling the size of the development and is implementing the identical components for the upcoming buildings.

“Any system that can significantly reduce the extent of callbacks should cause the industry to take note,” Holland concluded. “Rules of thumb don’t cut it anymore in a 3 ACH50, 2015 IECC, ASHRAE 62.2 world.”