Gratitude, products, and a party gives attendees plenty to do at Taco booth

On the way into the Orange County Convention Center in Orlando, Florida, two things were evident: the sun was shining, and Taco was in town. A green banner draped the side of the convention center hotel, celebrating 100 years of Taco. Inside the convention center, a large gathering migrated toward the green-and-white booth for breakfast with John Hazen White Jr., executive chairman and CEO of Taco, and his team.

“You folks have been a huge, huge part of this company’s success and growth and perseverance and not only the company’s but also my own, and for that, I’m forever grateful,” he said. “This is a special day, a special week for us. I’m so glad we all can be a part of these things that are happening.”

Cheryl Merchant, who was brought on as president in January of 2019, was acknowledged by John White as a manufacturing professional and a real leader.

“I personally think we now have as good a team, if not the best team we’ve ever had, and Taco is growing and developing as we speak,” he said. “Cheryl Merchant is doing an incredible job of running this company. We have lots of work to do and lots of improvement to make, but she’s tough, fair, and holds us accountable, including myself.”

During the press conference, several acknowledgements and awards were given. John Barba, director of training for Taco Comfort Solutions®, was presented with the Dan Holohan Lifetime Contribution to Comfort Award.

This award is given annually to an HVAC professional or company that has made a substantial contribution to comfort technology, advancement, or training while displaying the exceptional good humor and love of people exhibited by Dan Holohan throughout his long career. Barba is the fifth recipient of the award.

Another award presented wasn’t one that White expected. Merchant called “Johnny” White back to the center of the booth and began a tribute on behalf of the entire Taco company.

“So this gentleman, as you’ve heard already this morning, is constantly recognizing individuals and calling out and sharing his love and talking about how precious time is,” she said. “Johnny gives generously of himself to this world, and not just to Taco and his family. I know, because he’s become friends with not only all his employees but with homeless people he encounters as well. It seems only fitting in this hundred-year celebration, Johnny, that your team recognizes you. I would like to present this Taco ring from all of us as a congratulations for the best of the best.”

When the press conference broke off, there was still an entire three days of celebrating and education to happen at the Taco booth. Attendees stopped to look specifically at some of the new products like the 180-watt 0034e™ and 0034ePlus™ 180 models. These circulators are ideal for closed-loop heating systems as well as domestic water recirculation systems. Both circulators also offer a rotatable control box cover for a professional look, no matter the orientation of the installed circulator. 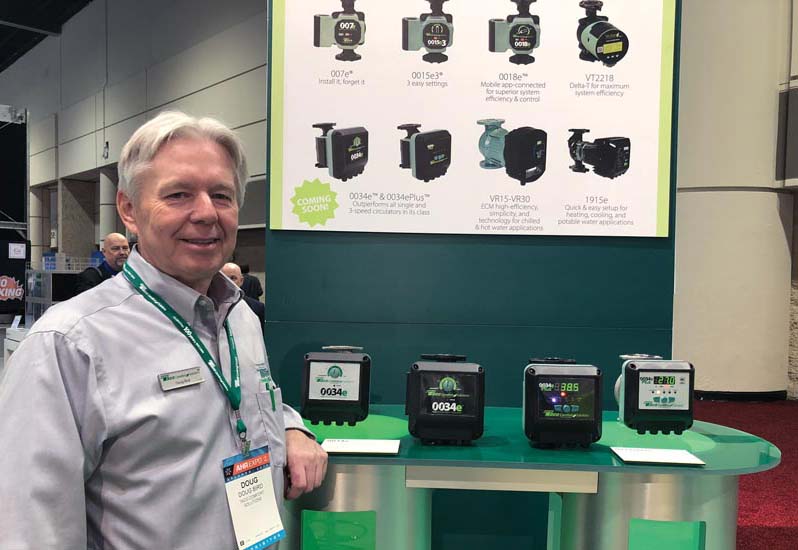 “There’s a ribbon cable attachment, so the device can be rotated 360 degrees,” said Doug Bird, product manager of water circulation, Taco. “That means the face is always in the upright position, regardless of how the pump is installed.”

Both circulators are dual-voltage 115V/230V and are available with cast iron or NSF/ANSI 61 & 372 certified stainless steel volutes.

High-efficiency ECM motors up to 30 horsepower are also available as part of this package. All Taco commercial pumps come with exclusive Taco Tags featuring eLink™. They provide customers with product information on mobile devices via near-field communication technology.

On Monday night at the AHR Expo, John White hosted a party for the Taco “family,” be they relatives, employees, customer, and even competitors. He brought his sons on stage and reminded everyone in the room that life was short and people were important. Those in the crowd cheered over food and drinks.

“Welcome to our little party,” White said. “I used to stay in my room until seven o’clock, because I was afraid nobody would ever show up. Doesn’t work that way anymore.”

“I always swore this off, I always said no invitations, no requirements to come to my party, and no presentations; but this year, I wanted just to take this moment, and say thank you,” White continued. “It’s so unusual to have a company reach 100 years. It’s even more unusual to do so in the same family.”