Shurtape Features Comprehensive Assortment of Tapes for the Trades

Since its invention and use in World War II, duct tape has become a staple for the American home. Children use it to build cardboard forts, and their parents use it to temporarily repair broken appliances, fixtures, and more. But for the HVAC contractor’s task, one tape won’t cut it. So Shurtape offers a collection. The company featured its comprehensive assortment of tapes at the 2020 AHR Expo, sharing products that can benefit contractors.

One such product is the FF-100, a UL Listed film tape that was created specifically for reflective installation. The UL certification ensures that the product complies with UL safety/performance requirements and that the tape will form airtight seals with no leaks, according to the Shurtape website. The tape was designed specifically for seaming and sealing reflective insulation and is highly conformable, hand-tearable, and features an aggressive, all-weather adhesive that forms a permanent bond and withstands numerous thermal cycles to deliver performance for the life of an HVAC system.

When using UL Listed tape, contractors do not need to be concerned that the tape will fail a building inspection test.

Lisa Zierfuss, product manager for HVAC tapes at Shurtape, said that the flexibility of the film tape back allows for the tape to do an excellent job of getting into nooks, crannies, and crevices.

Shurtape also featured its T-Rex tape at the AHR Expo. Zierfuss explained that T-Rex tape originally launched as a retail product from Shurtape’s Consumer & Craftsman Group. However, Shurtape has increasingly seen that the T-Rex belongs in the HVAC industry as well.

“Contractors tend to like a really heavy-duty, aggressive tape, so T-Rex is 17 mils thick,” she said. 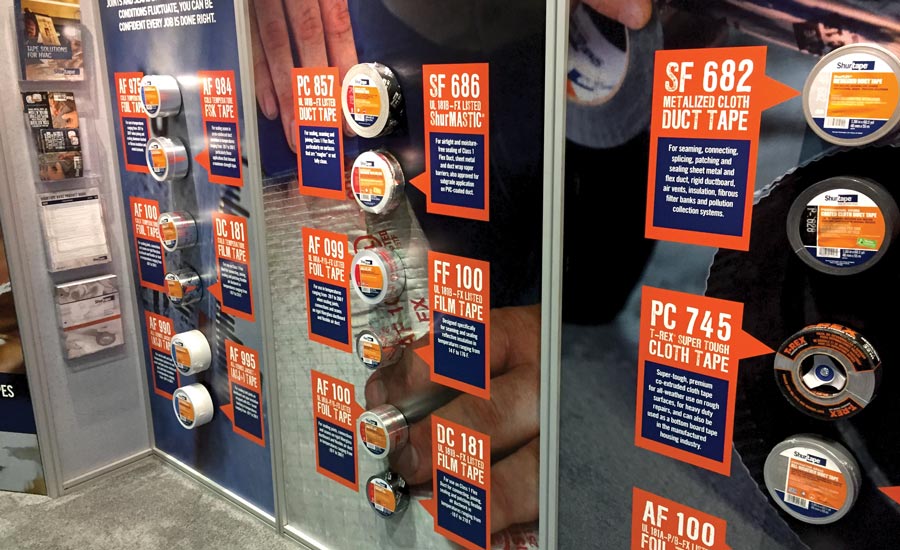 HOMEGROWN: Shurtape is a fifth-generation, family-owned company that manufactures much of its product in the United States.

The tape’s double-thick adhesive allows it to stick to rough, dirty surfaces through inclement weather types and extreme temperatures.

She added that contractors can use it for a whole host of applications. “If you have any kind of heavy-duty bundling, sealing, or seaming, you can even use it for a temporary repair,” she said. “You can use it outdoors. It’s got a waterproof backing.”

Shurtape’s foil tapes have an acrylic adhesive and perform in a wide range of temperatures, usually from minus 20°F to 260°F, Zierfuss said. “We’ve got traditional cloth duct tape, we have foil, we have film.” She said that the proper tape depends on which type of duct the contractor is sealing.

Shurtape is a fifth-generation, family-owned company that manufactures a large amount of its products within the United States. Zierfuss said that Shurtape is planning to expand into the electrical market, and that the company is increasingly seeing the “triple threat” of HVAC, plumbing, and electrical contractors. As skilled labor grows more scarce, some HVAC contractors are branching out into other trades as well.

“Because I don’t think it matters whether you’re a homeowner or business owner,” said Zierfuss. “It’s a lot easier to call one person to make an appointment than it is to call three different people.”

Shurtape’s goal is to meet the tape needs of contractors, whether they’re using it for an HVAC project or another trade.

“We’re trying to become a little more retail-focused and trying to convey our message to our customers in a broader way,” Zierfuss said.

Shurtape is also devoted to educating the industry regarding tape uses, regulations, trends, and more, something it aims to tackle through Tape University. The website, www.tapeuniversity.com, features blog posts that are dedicated to answering any question about tape that a contractor might have.