Attendees get hands on with building components, and extreme weather louvers

It was difficult to get near the corner of Ruskin’s booth, where its new prototype louvers made their debut. Not quite ready for an official release, the three items stood among other products as they waited their turn to be officially announced. That announcement is expected to come in the second or third quarter of this year, but until then, attendees had a chance to touch and see the late-stage prototypes and discuss current building trends.

Another trend beginning to take shape is the demand for FEMA-rated louvers in the Midwest, along with safe rooms in schools and hospitals due to the rise in tornado occurrences and strength. 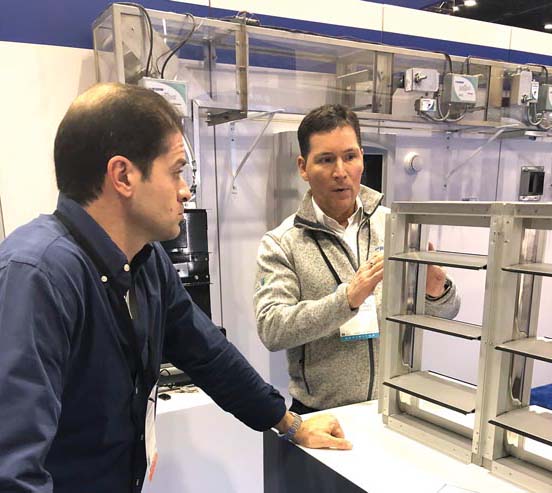 PROTOTYPE PREVIEW: There was a lot of interest near the corner of Ruskin’s booth where its new prototype louvers made their debut.

Also drawing attention in the booth was the Airflow IQ display. Next to it stood Glen Esser, application engineer, air measurement, Ruskin, providing one-on-one walkthroughs of how the system functions. He also explained to attendees what they could expect in employing the factory-assembled unit.

According to Esser, the feedback that he receives from real-world applications often comes in the form of phone calls from controls contractors the first time they set up this technology.

“I explain what the device is and how to use it, and the first one takes about 30 minutes,” he said. “From that point forward, it is a breeze to set up.”

Esser said that adding controls to devices is something that will likely continue to increase over time, and he pointed out the ability for contractors to access built in trending data on Airflow IQ. The unit maintains six different data points: airflow, cfm setpoint, feedback position, air velocity, commanded position, and velocity pressure.

“It takes a reading every minute and makes an Excel file every day,” said Esser. “Now you can come in with your laptop, download that file, and then see what’s been happening. If someone says, ‘My air measurement station is not working’ or ‘it’s out of control,’ I can look at that Excel file and see what’s been going on.”

The device has 30-day trending for short term; long-term trending extends for 13 months.