What’s in the toolbox of the successful contractor? Quality employees, robust training for said employees, and (of course) quality tools. Yellow Jacket highlighted its newest tools for HVAC contractors at the AHR Expo, featuring new smart technology to increase the speed and accuracy of technicians’ work.

The company featured the new packet probe infrared leak detector. Gary Lampasona, vice president of sales and marketing for Yellow Jacket, explained that the product comes with a carrying case, features two different ranges (high and low), and has an ascending gauge that tells when the detector gets closer to the leak.

“Bluetooth technology communicates remotely to your phone,” said Lampasona. “You can take a snapshot, save it, email it, and do whatever you want with the information.”

The app features a comment area where users can write the type of equipment, the serial number, or other information they’d like to add.

“So you’ve got the benefit of having all that information straight away, online on your phone, stored on your phone forever,” Lampasona said.

Yellow Jacket also expanded the capabilities of its P-51 platform. The Titan digital manifold, already released, measures pressures, temperatures, superheat, subcool, and pressure and temperature system parameters, and displays them locally on a digital screen. That information can be shared with devices through Bluetooth.

“This year, we’re adding to the capabilities of the P-51 platform,” Lampasona said. “We’re introducing the YJACK family of sensors.”

One of the expansions is the YJACK Dew psychrometer, which wirelessly measures temperature, wet bulb, dew point, and more in ambient air or ventilation ducting using a Bluetooth signal. The optimized sensor housing is designed for increased air exchange and better response time and with 1,500 hours of extended battery life.

“Now you can do supply and return, find out what’s coming in, what’s going out, and you can check out whether the system is efficiently working,” Lampasona said.

Another expansion includes the wireless YJACK temperature clamps, which offers Bluetooth measurements for surface temperature of pipes up to 1¼-inch diameter, and has a flexible cable connection for easy access in small and difficult-to-reach areas.

However, all of these Bluetooth devices can run into a problem.

“A lot of times, you’re using Wi-Fi or Bluetooth at long distances, so we’re set at 400 feet with our Bluetooth communications,” Lampasona said. “But if you put a bunch of walls in the way, metal walls, ductwork, concrete walls, or buildings from ceiling to floor on a roof versus down below on the side of the building, obstructions will reduce that range.”

So Yellow Jacket developed the YJACK PATH. The solution connects and rebroadcasts up to six YJACK™ devices and up to two P51-870 TITAN devices at one time using a Bluetooth signal, while providing extended signal strength through difficult to penetrate barriers.

“This is your path to measurements, your path to the sensors,” Lampasona said. “This extends your measurement from 400 and doubles it, but I could put up the five of these in a row and go to 2,000 feet.”

He further explained that contractors can use these to bounce the signal around large obstacles (like thick concrete walls or a roof), instead of attempting to penetrate through them.

Finally, Yellow Jacket connects all of these tools through an inclusive app, the YJACK View app, which will launch in 2020. The app is a central hub for connecting all YJACK tools and the P51-870 Titan devices. Using a smartphone, technicians can measure HVACR parameters, monitor evacuation status, create and save/email data log reports, and more, all through Bluetooth technology. 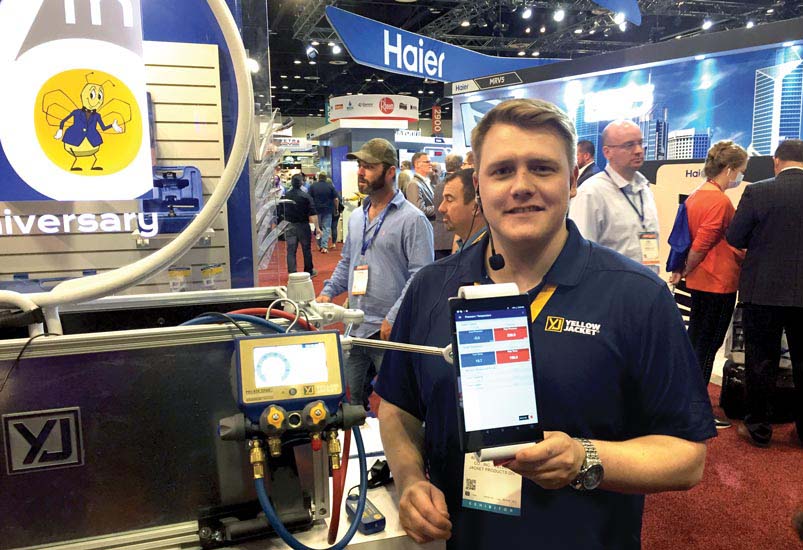 EASY TO SEE: A lot of younger technicians are far more comfortable with viewing data on a smart device, rather than a traditional analog device, said Lampasona.

Yellow Jacket sells the YJACK products in two different kits and also individually. All the tools work individually on smart devices as well, if that’s what the end user wishes.

Lampasona explained the greatest strengths of using tools like these.

In addition, he said that a lot of younger technicians are far more comfortable with viewing data on a smart device, rather than a traditional analogue device. Visual graphs and data also makes it easier for these younger technicians to grasp the system quickly.

Later this year, Yellow Jacket plans to come out with more YJACK sensors, expanding the platform.