Products save time, help achieve greater efficiencies than ever

Emerson’s booth at the AHR Expo displayed a wide array of new products, ranging from tools to compressors to controls. Near the front of the booth, Ridgid displayed several tools designed to help contractors increase their efficiency.

“Right now, we’re seeing in testing that it’s lasting over 100,000 cycles before it fails,” said Mitch Barton, marketing director, global press connection, Ridgid. “It has an endless swiveling head so contractors can get into tight spaces. It’s about 20 percent more efficient because of the brushless motor, and we came out with a new battery pack which gives it about 20 percent more efficiency as well.”

The device is Bluetooth connected. Users can download the Ridgid Link smartphone app to check battery life, how many cycles have been pressed, whether the device needs maintenance, and the last location it was used.

Coming out this summer is the new RP 342 XL, which works as a standard tool and as an extended throw tool.

“When used with the big actuator, I can press 2½- to 4-inch fittings on steel pipe in less than nine seconds,” said Barton. “It does not require a press booster and can be used with Ridgid’s standard fixtures including jaws, rings, press snap, and StrutSlayr.”

“It’s a time saver and it gives you a clean cut,” he pointed out after a demonstration. “It’s clean, it’s square, it’s burr-free, and it requires absolutely no filing.”

“We have a fixed-speed X-Line series as well, but this is our new digital version,” pointed out Julie Havenar, product manager, condensing units, refrigeration at Emerson.

The digital version allows end users to tie it into multiple applications — water coolers, reach-ins, prep areas — and it can replace multiple condensers with one. The unit has continuous capacity modulation from 20 to 100 percent, resulting in precision temperature control, reduced compressor cycling, and lower energy consumption. It can maintain box temperatures within +/-0.5°F, allowing food retail and food service establishments to accurately maintain the temperature of their food.

“It has a more precise temperature control over the different systems, and it’s more energy efficient than a lot of solutions out there,” Havenar said. “We also include advanced onboard diagnostics to protect the compressor and send out error codes to let the contractor know that something’s going on with the system that needs to be addressed.” 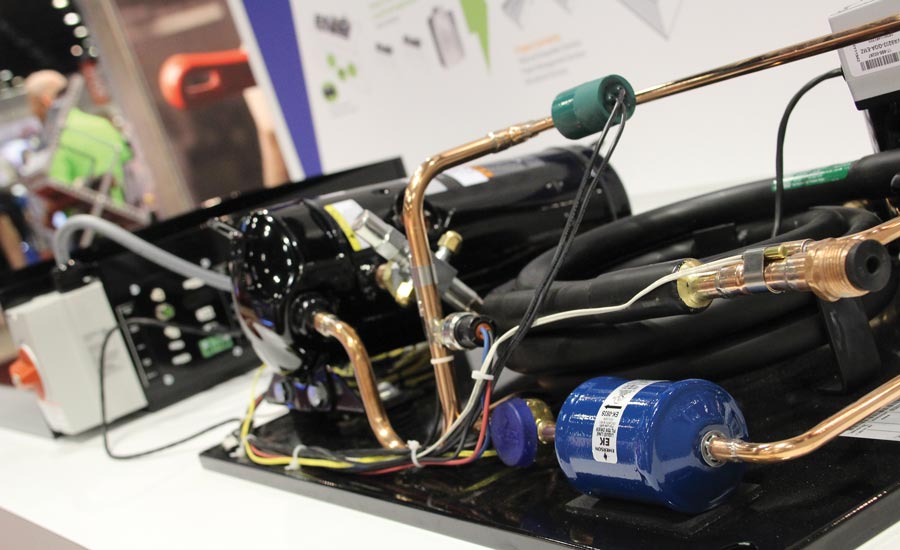 “It’s basically a condensing unit that comes along with a control module and all the other components necessary to run refrigeration equipment indoors,” said Diego Marafon, refrigeration scroll product manager, Emerson.

The charge is very low — four or five pounds of charge, depending on the size — meaning that as regulations and sustainability goals continue to push the market toward lower-GWP and refrigerants and higher-efficiency systems, this solution provides a foundational infrastructure upon which future sustainability improvements can be expanded.

In the realm of controls, Ed Blittschau, vice president of marketing and business development at Emerson - White-Rodgers, said the company is working to balance universal and direct replacement.

“With universal controls, it makes it easier for the contractor, who doesn’t have to carry as much stuff, to stock their truck with fewer parts, service more systems,” he said. “If you typically serve one or two brands, direct OEM replacement may be a better option, so we’re doing a bit of both.” 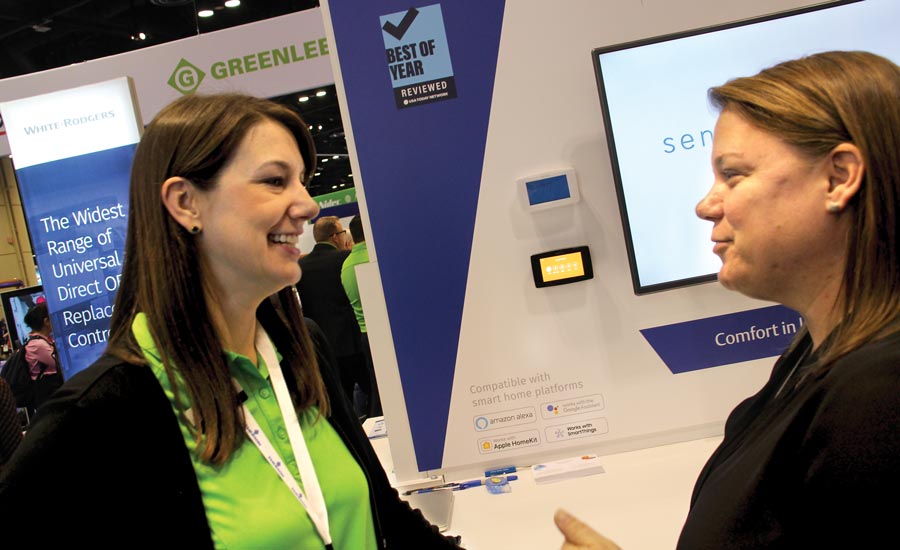 STAT CHAT: Katie Pelikan (at left) points out Emerson’s line of Sensi thermostats to Jamie Burger, who traveled to the show from Lake Forest, Illinois.

“I think that really helps the contractor because we start to get more recognition from the homeowner,” said Joe Samel, Sensi Predict marketing lead, residential solutions, Emerson. He said the company has gotten a lot of feedback from contractors asking if they could put their logo on the thermostat.

“So we just introduced color-logo contractor branding — free to the contractor,” he said. Contractors can get their logo, along with their name and phone number, printed on thermostats they order, and can see a picture online of exactly what it’s going to look like before they buy.

In the next five years, he sees controls continuing to play an increasing role in the market.

“We just introduced a humidity control on Sensi,” he said. “It’s getting those traditional features that contractors are looking for incorporated with a Wi-Fi stat. To me, it’s about making the app user-friendly, because I think the homeowner really doesn’t look as much on the wall. They look at their phone. It’s turned into your remote control.”