This website requires certain cookies to work and uses other cookies to help you have the best experience. By visiting this website, certain cookies have already been set, which you may delete and block. By closing this message or continuing to use our site, you agree to the use of cookies. Visit our updated privacy and cookie policy to learn more.
Home » Leveraging the Power of HVAC Tech to Retrofit Performing Arts Building
HVAC Commercial MarketChillers & Towers

Opened more than a century ago, The Ebell of Los Angeles and the accompanying Wilshire Ebell Theater participate in and encourage the educational, cultural, and social growth of the Los Angeles community, working with a wide range of artists and promoters from around the world to bring performing arts to the diverse population of the city. The complex has been owned and operated since 1927 by the Ebell of Los Angeles women’s club and was added to the National Register of Historic Places in 1994, solidifying its status as an iconic structure.

With a variety of spaces within the structure, The Ebell of Los Angeles houses a performing arts theater, office spaces for staff, and smaller rooms for special events. Since its opening, the Ebell Theatre has hosted musical performances and lectures by world leaders and top artists, including the likes of Judy Garland, Igor Stravinsky, Stevie Wonder, and Michelle Obama.

With the need to replace an old, inefficient cooling tower and chiller system that only cooled the theater space, The Ebell of Los Angeles’ management team sought a new, innovative HVAC solution to address the full needs of the theater and the occupants throughout the larger complex. 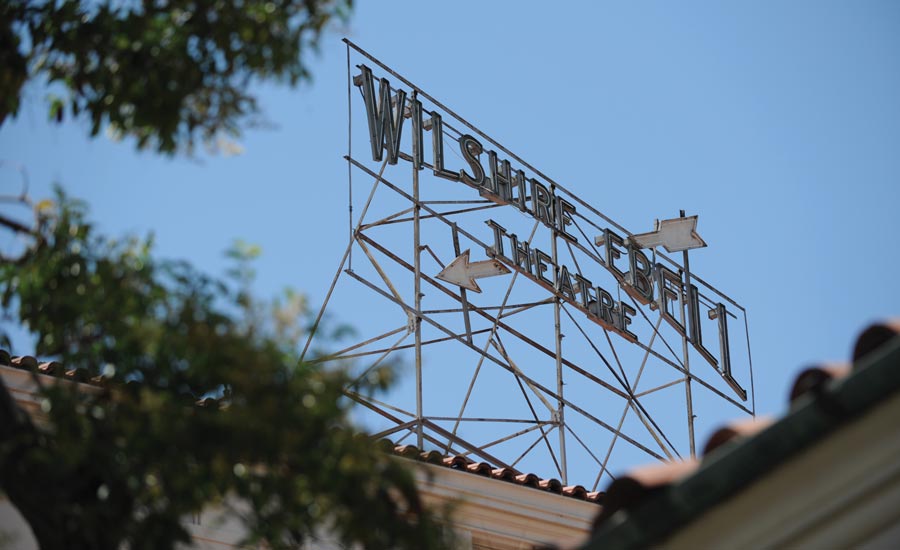 A LANDMARK SPACE: The Ebell of Los Angeles houses a performing arts theater, office spaces for staff, and smaller rooms for special events. 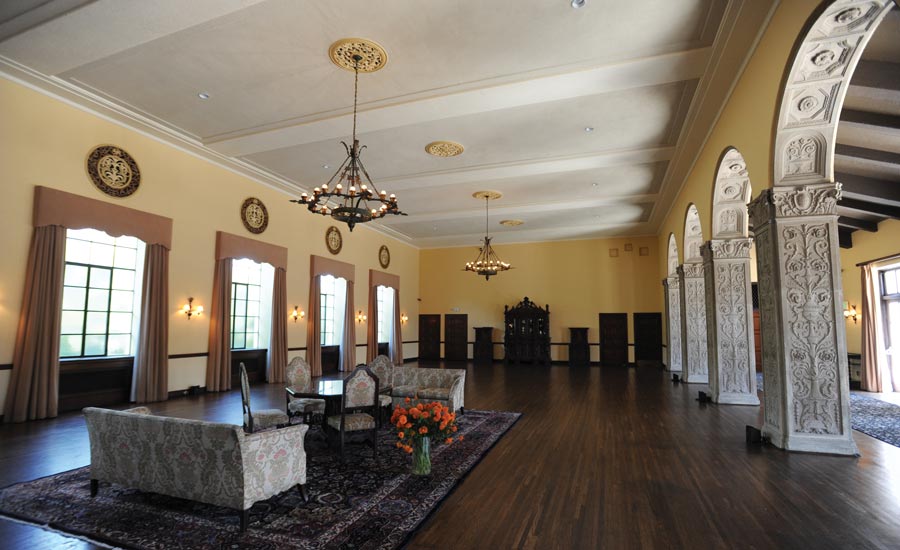 The facility management team required a versatile system that would both respect The Ebell of Los Angeles’ recognized status on the National Register of Historic Places and meet the theater’s needs to cool, heat, and dehumidify the front and backstage areas. Additionally, the system needed to provide air conditioning for the building’s event hosting spaces, which the old system did not provide for beyond the theater.

The new system needed to maintain the aesthetically appropriate historic qualities of the landmark property while delivering high performance and enhanced energy savings. A key requirement for the new HVAC system was design flexibility. The Ebell of Los Angeles’ unique and historic architecture presented a substantial obstacle due to the structural difficulties of installing outdoor units on the roof of the building, which meant the new system would have to be flexible enough to fit in two places — the confines of the basement, where the old chiller was housed, and discretely around the exterior of the theater.

Finally, due to the varying occupancy throughout the entire property, the system needed to effectively condition each space with a wide range of heat loads and provide effective dehumidification to the cavernous theater space.

After carefully evaluating the criteria, the building’s general manager and chief operating officer Philip Miller, in conjunction with mechanical engineering firm Athena Engineering, designed a solution that would allow for occupant comfort in the theater and event spaces. 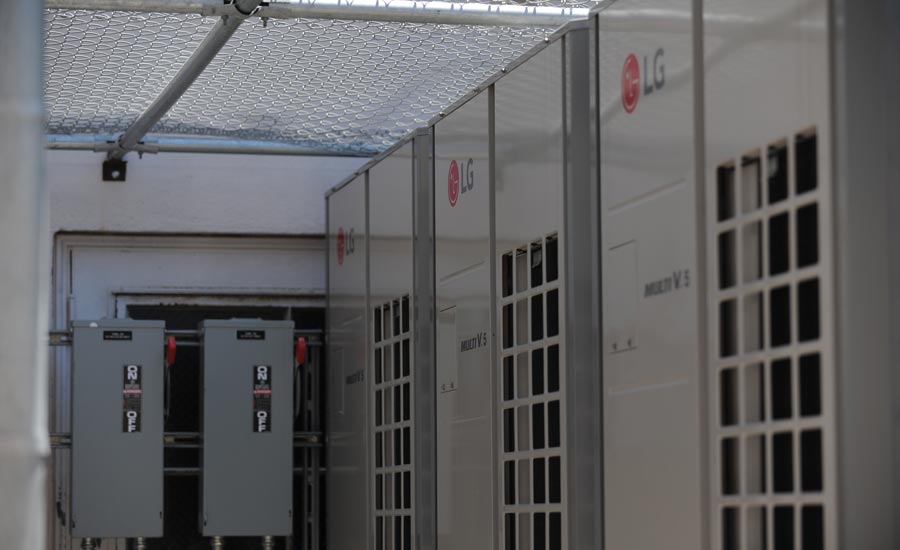 With this multifaceted property encompassing a variety of conditioning needs, the spaces all necessitated specific requirements. For example, the theater can house large crowds for a performance one day, then may see days without any events. Therefore, due to the various loads from night to night, the amount of moisture and body heat had to be taken into consideration and managed with a sensible solution.

Prior to installing LG, the Ebell maintenance team had to use portable air conditioners to keep the rooms cool. With the new VRF technology, the spaces are conditioned quickly and quietly.

Due to the unique aspects and structure of the building, Athena Engineering designed a custom-built system that replaced the old chiller structure with LG’s condensing units, which were installed on the exterior of the theater. The new units feed into LG’s AHU Conversion kits that are housed in the theater’s basement. The AHU Conversion kits, consisting of EEV kits and Communication kits, were then able to communicate with coils stacked within the new custom AHUs to drive the temperatures of the coils lower to effectively dehumidify and condition the air to increase comfort exponentially. Additionally, LG’s MultiSITE™ Communications Manager was installed to allow the LG systems to communicate with third-party controls for system management.

“As the sun-load hits this massive concrete structure, it basically stores all of the heat and releases into the space,” noted Richard Chiera, senior vice president of product engineering, Athena Engineering. “We needed a system that could handle this … [and chose to] harness the power of VRF to ramp the system up rapidly and get to temperature in only a couple of short hours.”

The basement and outdoor space behind the theater were used to house the LG AHU Conversion kits and 4 Multi V 5 VRF systems, comprised of 12 modules. 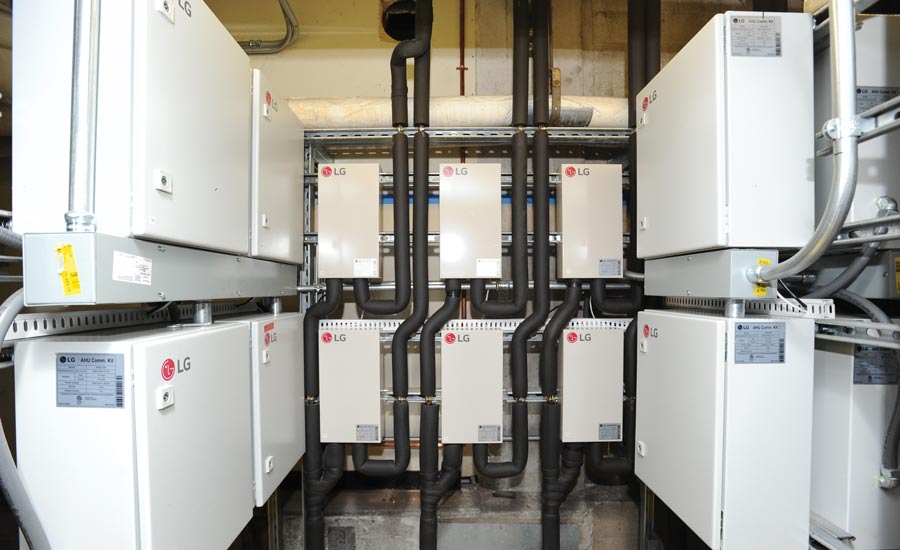 OUT OF SIGHT: LG’s AHU Conversion kits, housed in the theater’s basement, communicate with coils stacked within the new custom AHUs.

“With LG’s new system in place, we can easily set individualized temperature settings for each room to create peak comfort for our occupants through the entire property — whether that’s guests in our theater or clubhouse rooms,” said Philip Miller, general manager and chief operating officer, The Ebell of Los Angeles.

Ultimately, the LG Multi V 5 outdoor units and AHU Conversion kits allowed for a flexible design that worked with the existing ductwork to deliver an energy efficient HVAC solution. LG’s controls also streamlined management from one central location for the owners and maintenance team.

Content provided by LG. For more information on the complete portfolio of LG air conditioning technologies products and how they can fit your application, visit lghvac.com.