Luxury Apartment Complex gets a Makeover

They’re the Google reviews any property owner would covet:

“My husband and I are active senior citizens and have been residents for almost three years. I could go on and on mentioning the plusses … but I see someone else has already pointed most of them out. For us, the underground parking had been a blessing … [the] insulation is excellent; it’s the quietest place we’ve ever lived.”

The writer continued: “Having the concierge service truly enhances the feeling that one is living in a very friendly hotel. But overall, what comes to me is the consistency of the services provided. It’s easy for a sales staff to promise this and that to get a potential customer to join. Far harder to follow through day after day. When we moved in, we were told, ‘Welcome to Wall Street Tower, your new home,’ and every day since, the staff continues to do their part to make us glad that this is true.”

No, this isn’t New York. It’s 308 miles away, in the heart of downtown Manchester, New Hampshire.

Wall Street Tower’s managers recently completed a sweeping $4.5 million renovation of the building, which was constructed in 1986. The 17-story residential complex has 152 apartments with custom cherry cabinets, ceramic tile floors, granite countertops, stainless steel appliances, and programmable thermostats. But the true source of comfort for an apartment complex in New England, where winter temps frequently dip well below freezing, lies in the heating, so an important part of the renovations included a hydronic system overhaul. 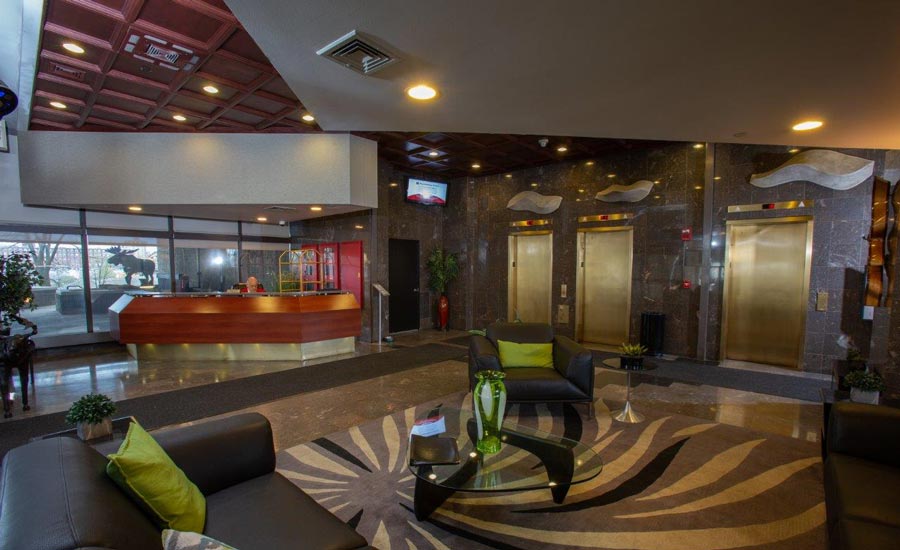 HIGH END: The building offers many amenities, but the true source of comfort lies in its hydronic heating system.

The original modular style boiler plant had done its part and needed to be replaced. The owners contracted Denron Plumbing and HVAC LLC, a local firm specializing in commercial hydronics. Several months earlier, Denron had replaced the original cooling tower with an Evapco unit and installed variable frequency drives (VRF) for 40-hp pumps that circulate fluids to and from the rooftop coolers.

“The building’s main mechanical systems are vertically-stacked water source heat pumps, so upgrading to high-efficiency boilers is an ideal choice because of the lower return water temperatures from the system,” said Joel Pickering, Denron partner and president. 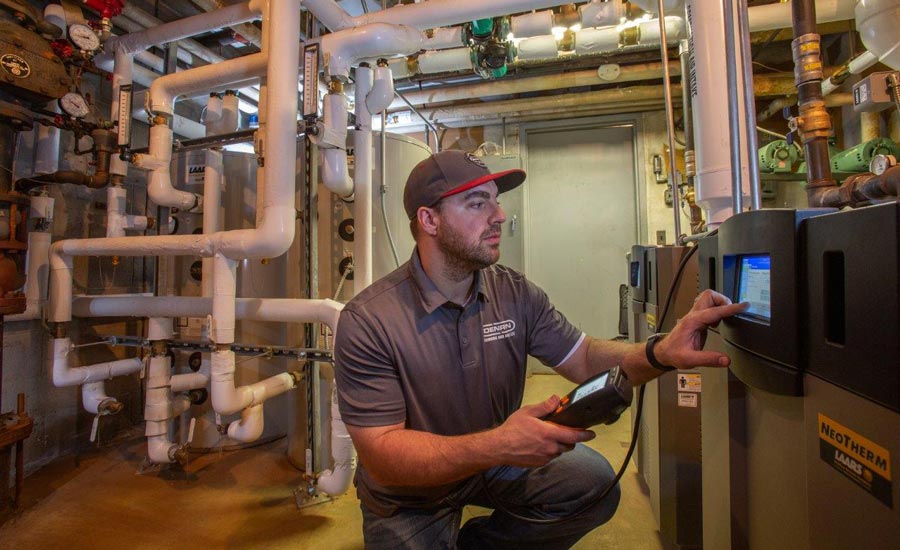 IMPRESSIVE CONTROLS: A tech with Dennon Plumbing and HVAC LLC checks the controls on a Laars boiler.

“We toured the Laars factory last year and were impressed with the product,” Pickering said. “Our lead boiler technician was really impressed with the MagnaTherm controls and serviceability. They’re a finely built product and super efficient.”

Just downstream of the boilers, the hydronic system grew to include new Taco components, with guidance and expertise given by experts at Randolph, Massachusetts-based manufacturer’s rep firm Emerson Swan. 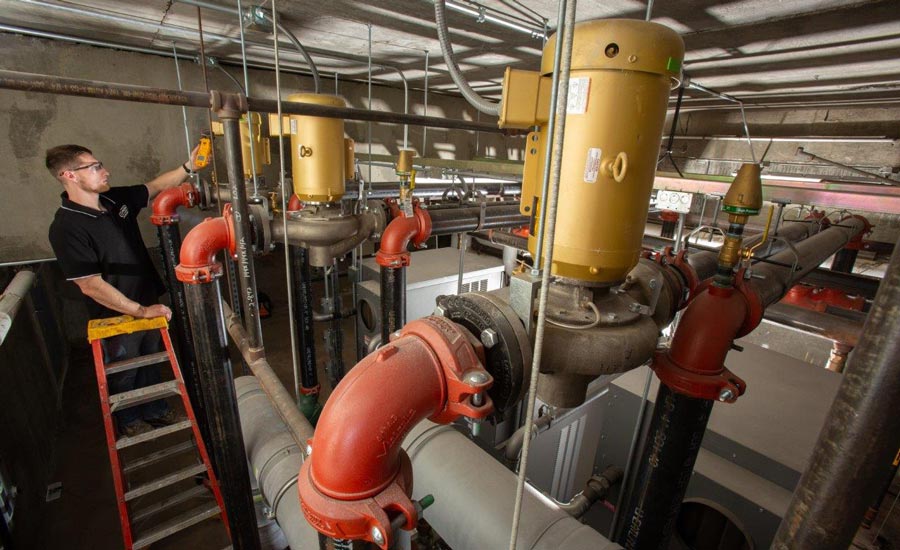 BIG JOB, SMALL DETAILS: A technician ensures that the mechanical system is in working order.

“As part of the design-build effort, we were asked to help with the specification of key hydronic components, including a 20-hp, 6-inch-by-5-inch FI base-mounted end-suction pump; a 132-gallon [ASME-certified] expansion tank with two multi-purpose valves; and an 8-inch air separator — all in the fluid path between the Laars boilers and the heat pumps,” said Reid Goodrich of Emerson Swan.

To oversee the Wall Street Tower retrofit, Denron created a team of six employees, and the project took approximately three months to complete.

“We were under contract in December (2018) and did limited demolition of the existing boilers and poured the new housekeeping pads in January,” Pickering said. “We provided temporary boilers to make the upgrade seamless for our customer and the residents.”

Because Wall Street Tower is a residential building, there were some challenges while working on the retrofit, such as getting equipment, material, workers, and tools in and out of the building and into the small mechanical area with limited access.

Demoing and rigging was also a challenge because of the location of the mechanical room. And access was limited, since the building has only one freight elevator. Denron’s crew had to schedule their trips up and down around resident schedules.

“Since the mechanical system was on the 17th floor, we had only small windows of time to use the elevators without disrupting residents,” Pickering said. “Also, system shutdowns needed to be coordinated with facilities staff ahead of time.”

Denron technicians removed the first bank of failed boilers while leaving the second bank of boilers operating to keep the building warm. Christopher Mitchell, Denron partner and small project manager, said, “We had hopes to reconfigure and rebuild the bank of modular boilers and add a few of our temporary boilers. Then, we could get one of the two new MagnaTherm boilers up and running before we removed the second bank of old boilers to complete the changeover.” 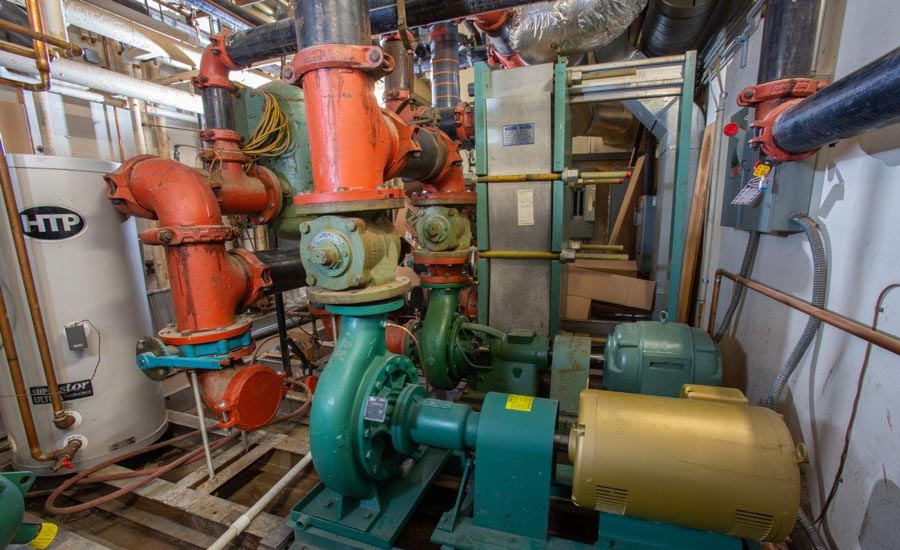 Unfortunately, the early plan wasn’t successful due to the boiler room’s small size, so the Denron team left the temporary boilers and existing boilers in place for the winter months and remotely monitored building loop temperatures to be sure there were no ugly surprises.

“Getting temporary boilers in place where we wanted them initially wasn’t possible, so we decided to wait until the shoulder months before resuming the installation,” Pickering said.

This retrofit, in essence, became the equivalent of performing two system installations in one building.

“Concerning the swap over, we needed to run temporary hydronic mains and gas piping to minimize down time,” Pickering said. “We took out half of the boiler plant to make room for one of the new boilers. Then we swapped operation over to one new boiler. We were then able to disconnect and remove the remaining half of the boilers and finally install the second new boiler.”

UP ON THE ROOF 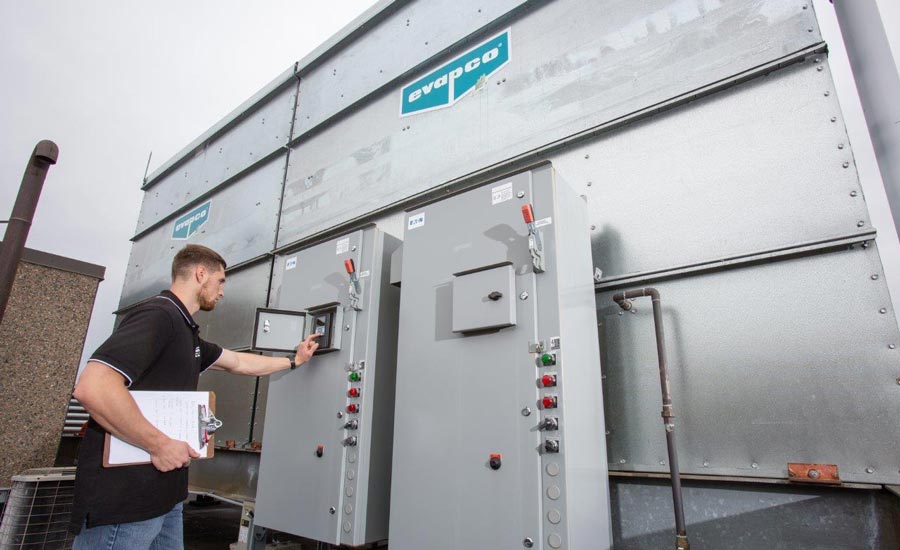 “As part of a design-build partnership, we helped to specify the LSTEs and worked them in with the team as part of the mechanical system’s design as the most cost-effective solution,” McLaughlin said. “They were, after all, very pleased with the performance of the existing equipment. Our key considerations were unit performance and capacity, unit steel support — the existing support infrastructure was structurally sound, and would remain — and the existing piping and electrical service. We found all of those facets to be in fine condition and would be used again.”

So when the old units were dismantled and the crane lowered the new cooling towers, built by Evapco to the exact footprint of the 32-year-old coolers, the existing rigging was a perfect fit. “The new LSTEs were an exact dimensional duplicate of the old equipment,” McLaughlin said.

“The logistics of making it all happen without disrupting an occupied building wasn’t easy,” he said. “But ultimately, our client gets some energy savings to lower their operating costs, and the rebate program (see sidebar) really helped make it all possible. We’ll be maintaining this product to give the customer years of good performance.”

“Prescriptive rebates are administered in tiers based on the size and efficiency of the equipment being installed,” said Matt L’Heureux, LEED AP, relationship manager for Resilient Buildings Group Inc., Concord, New Hampshire.

“Prescriptive rebates are generally suitable for small to medium-sized businesses undergoing end-of-life equipment replacements or new construction projects where there are no other applicable energy savings measures present.”

There is a maximum size cap of two million Btu for boilers under this path.