Even small upgrades in supermarkets can result in big energy savings

Supermarkets have notoriously thin profit margins — usually in the range of 1-2 percent — and competition is fierce. That is why store owners and managers are always looking for ways to lower operating expenses, and their refrigeration systems can be good places to start.

The refrigeration system is the biggest energy user in supermarkets, accounting for about 40-60 percent of their electricity consumption. It can be expensive to buy new, higher-efficiency refrigeration equipment, which is why food retailers may be more interested in investing in energy-saving retrofits. This can be a very good idea financially, according to the Energy Star program, which estimates that in supermarkets, one dollar in energy savings is equivalent to increasing sales by $59.

Before suggesting any refrigeration retrofits, contractors should first consult with their supermarket customers to make sure they are interested in making those changes, said Peter Dee, sales director of food retail - North America, Danfoss.

“This is important for several reasons,” he said. “For example, the end user may not want to invest in the location — perhaps because they are leasing the store, have unacceptable sales in the store, or have plans to completely remodel the store. It also is possible that the end user could have different criteria to meet regarding budget, capital equipment, controls, and energy for that store or location.”

If the food retailer is interested in learning more about retrofits, contractors should conduct a comprehensive energy audit of the refrigeration system. This includes carefully inspecting the entire system to determine what’s broken, what’s no longer connected, and what needs to be repaired, said Andre Patenaude, director of food retail marketing and growth strategy, cold chain, Emerson.

“Often, there could be basic things that may have been set up during the commissioning process but have since been disabled for a variety of reasons (e.g., a heat reclaim system that was disconnected or a low-condensing floating head configuration that was inactivated),” he said. “An inspection should also include evaluating all electronic controls, energy management systems, sensors, and transducers to ensure they are still functioning properly as intended.”

Tony Welter, vice president and director of refrigeration, Henderson Engineers, Lenexa, Kansas, agrees that an on-site audit is important in order to evaluate the working conditions of the refrigeration system, as well as identify energy-saving opportunities that can pay for themselves.

“Many times, simple control updates found during the auditing process can be less expensive items that yield real value,” he said. “Other things to look for include making sure suction and head pressures are set correctly, the subcooler is operating as intended, superheats are set correctly, variable-frequency drives (VFDs) are in good operating condition, and that regular maintenance is keeping the store in peak operating condition.”

Identifying which refrigerant is currently being used in the system is another important part of the audit, as this will help contractors determine whether the refrigerant will be a viable option in the future.

“For example, many supermarkets today have refrigeration systems charged with R-22, but as of Jan. 1, 2020, it will no longer be manufactured or imported into the U.S., per the EPA’s Clean Air Act,” said Patenaude. “In other areas of the country, such as California, R-404A is being phased out. So, if the long-term viability of an existing refrigerant is in question, contractors should consider potential replacement refrigerant options and understand potential impacts on system pressures, as well as available compression, expansion valve, and control technologies.”

Once systems are in proper working order, contractors can establish an energy baseline based on the weather-normalized profile of the system or even the entire store, he said. Energy management systems (EMS) and software can then help contractors and store operators evaluate when energy consumption exceeds the baseline.

BEST BANG FOR THE BUCK

Refrigeration retrofits can be relatively simple and inexpensive or costly and extensive, and contractors are key in helping store owners decide which ones offer the best return on investment (ROI). According to Welter, some of the retrofits that offer the best bang for the buck include installing LED lights and upgrading evaporator fan motors to electronically commutated motors (ECMs). 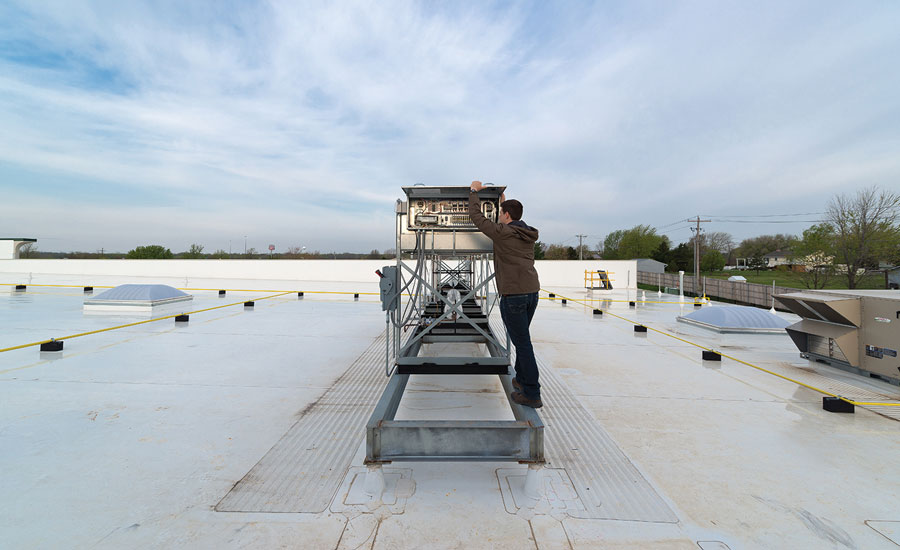 “The amount of energy saved will vary depending on the condition and equipment at a given store, but estimates of 15-35 percent for these retrofits are often observed in the field,” he said.

Retrocommissioning a system and returning it to its original performance and energy baseline is another relatively low-cost retrofit, said Patenaude.

“Over time, stores can potentially experience an energy-efficiency drift after the original system commissioning,” he said. “Retrocommissioning includes making sure all the operating set points are where they should be. Valves, components, suction pressures, and superheats can be adjusted to help supermarkets to achieve potentially significant energy savings — sometimes potentially approaching 20 percent — just by returning the system to its initially intended operating state.”

Dee added that retrocommissioning existing controls, in particular, can result in significant improvements in refrigeration equipment efficiency. This process should include reviewing temperature and alarm set points and applying energy features (if not set up), such as suction pressure optimization, night setback, scheduling equipment to turn on and off at appropriate times, and setting anti-sweat heater (ASH) controls.

“Onsite replacement of controls — such as system managers, input/output (I/O), sensors, pressure transmitters, photocells, etc. — is another cost-effective retrofit,” he said. “Integrating the control of all power-consuming applications, including refrigeration and HVAC, into one system can also reduce complexity as well as operational costs. Finally, energy savings can be amplified by applying variable-speed drives to the store’s HVAC system, including rooftop units and condensers.”

The optimized control of cold cases and freezers can also reduce the energy bill in a supermarket by up to one-third without compromising food safety, said Dee.

“Adaptive refrigeration holds the key to maximizing energy efficiency and coefficient of performance (COP),” he said. “The secret lies in the minimum stable superheat (MSS) algorithm that ensures perfect balance of the refrigeration system, where the full surface of the evaporators is used without risk of liquid damage to the compressors. Adaptive superheat can deliver energy savings up to 12 percent over alternative technologies.”

One of the more expensive refrigeration retrofits — that can also result in some of the most significant energy savings — is the replacement or addition of doors to medium-temperature multi-deck cases, said Welter. The loads for the door cases are often reduced 50-75 percent compared to the open deck cases, which significantly reduces the consumption of energy by a store.

Floating the head pressure, often referred to as low-condensing operation, is another energy-saving option that is often overlooked, said Patenaude.

“This strategy refers to the continuous modulation of the condenser pressure in response to outside air (or ambient) temperatures, using a fixed temperature differential (fixed delta T) relative to the outside air,” he said. “In some cases, this may have been part of a system’s original planned specification that has since been abandoned. This alone could potentially help to contribute to 15-20 percent energy improvements.”

A number of modern compressors can support low-condensing operation, noted Patenaude, although in some instances, contractors may determine that it is necessary to add additional electronic expansion valves (EEVs) and controls to complete the system setup.

Adding EEVs can allow for dynamic control of floating both head and suction pressures and may also allow tight superheat control of evaporators, he said.

“In some cases, this step has been shown to deliver more than 15 percent in energy-efficiency gains, depending on the current status of the system,” he said. “Not only can this provide energy savings, it can also deliver additional significant system benefits, including but not limited to reduced compressor cycling to extend contactor and compressor life; stabilization of system pressures; and improved temperature control of cases.

Customers looking to completely replace their existing systems with an energy-efficient solution that utilizes an alternative refrigerant may want to consider CO2, although this is definitely the most expensive option.

“For a decade or more, the potential of CO2 in supermarket refrigeration has been recognized in colder climates, but in recent years, the invention of new technologies has made transcritical CO2 systems in warmer climates both viable and profitable,” said Dee. “These technologies include multi-ejector systems with energy saving potential of up to 10 percent on an annualized basis, compared to the previous generation of transcritical booster systems. Compared to first generation systems, savings during the hottest hours of the year are up to 30 percent, meaning that significant savings in installed compressor capacity can be achieved, potentially reducing the overall cost of the system.”

Once the retrofits are complete, contractors need to verify and quantify the amount of energy savings achieved. That is why it is important to record system measurements before performing any retrofits or recommissioning activities.

“This is critical to measuring system improvement and establishing a new weather-normalized energy baseline,” said Patenaude. “We also recommend the use of an EMS that would allow true measurement and verification (M&V) capabilities in relationship to this new weather-normalized data. That way, current performance can be compared to established baselines. Using an EMS may also allow an entity to qualify for utility incentives that could further increase a project’s ROI.”

There are many ways in which contractors can help their supermarket customers save energy with their refrigeration and HVAC systems, and the best way to do that is to be upfront and direct about expected outcomes.

“When it comes to selling retrofits, contractors need to be realistic about the savings potential of each upgrade,” said Welter. “It’s also really important for them to be transparent about costs and potential savings for the entire year.”

By clearly outlining goals and expectations of any energy retrofit, contractors can help ensure their supermarket customers are happy with the outcome.