Energy awareness is increasingly popular in the construction industry

Whether it’s saving money, going green, hitting energy benchmarks, or gaining the prestige of a LEED-certified building, energy management is increasingly becoming top of mind for cutting-edge new construction. Following are two examples of the difference that high-performance building features and high-efficiency HVAC technology can make: a Pensacola school that became the most energy-efficient in the county, and an eight-story, LEED Gold-certified office building that became a district heating and cooling center in Toronto.

Built in 1921, A.K. Suter Elementary School in Pensacola, Florida — like many older public schools in the state — used a retrofitted patchwork of packaged and split-system air conditioning equipment. Pensacola, located in the Florida panhandle, has some of the state’s highest humidity levels.

“We’ve got ‘air you can wear’ from April through October,” said Jeremy Oksanen, system designer and mechanical engineer with Premier Engineering Group. “Mornings average 84 percent rh and afternoons, 64 percent.” When humidity is at those levels and the dew point is high, everybody feels hot and sticky, no matter the temperature.

Due to the humidity, the equipment was in all-cooling mode all the time, which kept the energy bills high. In 2011, Escambia County School District (ECSD) decided to tear down the old school and rebuild it using high-performance building features, including walls constructed with insulating concrete forms (ICF) and a vapor barrier, as well as new, high-efficiency HVAC technology.

The new system was designed using single-duct VAV boxes: a sheet metal box with an actuator that opens or closes a damper to increase or reduce the supply of air. Each single-duct VAV box is ducted to an air handling unit (AHU) that contains a cooling coil with a 51° to 53°F set point — cold enough for sufficient water vapor to condense on the coil for dehumidification and then a reheat coil at the VAV box with a variable set point to raise the air temperature to avoid overcooling. The supply air temperature is reset upward based on humidity levels and valve position to reduce reheat.

VARIABLES: Cooling coils and reheat coils in the VAV boxes are connected to a four pipe, variable primary hydronic system. Variable-speed pumps drive the chilled or hot water through the chiller or boiler loop to supply the coils inside the VAV boxes or AHUs.

“The damper control boosts efficiency by optimizing the volume of air needed to satisfy the room’s thermostat and avoid unnecessary heating and cooling,” Oksanen said.

The overall system employs supply air fans in AHUs to deliver conditioned air through ductwork connected to the VAV boxes. Then, return air fans circulate the air back to the AHUs. Classroom and administrative areas are served by multi-zone VAV air handlers, with a dedicated VAV box in each classroom and corner office/conference room, and one VAV box per three administrative offices. The cafeteria got its own single-zone AHU that can modulate airflow, outside air, and capacity based on occupancy.

To make sure each VAV box gets the right amount of chilled or hot water, system designers used about 130 Danfoss AB-QM™ pressure-independent control valves: one for every VAV box and AHU. Using integrated differential pressure controllers, the valves essentially segment the entire system into independent control loops to ensure the design flow — which, in this case, is typically 6 gallons per minute (gpm) — is available at all the VAV terminal units at design temperature set points. 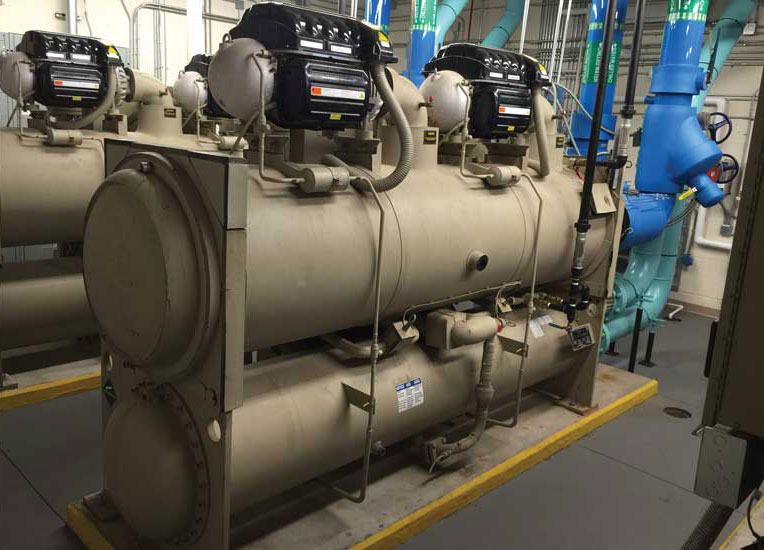 LOWER COST: The new A.K. Suter Elementary school’s yearly energy use is at 0.024 MBTU per square foot, far below any public elementary or high school in the county.

To generate chilled water at the 44° set point, two water-cooled centrifugal chillers are employed, each using two Danfoss Turbocor® TT400 variable-speed, magnetic-bearing compressors. Each pair of compressors delivers 250 tons of nominal cooling capacity per chiller. Together, the chillers provide N+1 redundancy, meaning one chiller is available as a standby or backup — or to provide additional capacity in the event of school expansion.

“Our chillers can turn down capacity as low as 17 percent in winter, when colder tower water makes it possible to lower condenser water temperature down to 65°,” said McGraw. “In summer, although condenser water doesn’t get colder than 85°, we rarely operate at full capacity due to lower building loads.”

With Danfoss Turbocor® compressors, capacity can be “turned down” to match the cooling load required. Each motor is integrated with a variable-frequency drive (VFD) that controls the voltage and amperage. The drive varies frequency between 300 and 800 Hz, which provides a compressor-speed range from 9,000 to 29,000 rpm without using a gear set. VFD technology is also used on fan motors and on the system’s eight pumps (one VFD per pump), which allows the operator to match pump speed with water demand to save energy and reduces stress on components. Using VFD pumps in conjunction with Danfoss AB-QM™ valves also eliminates water hammer, a problem that is common in hydronic loops when pressure surges inside a pipe, causing noise, vibration, and the possibility of serious pipe damage.

Efficiency is further enhanced by oil-free magnetic bearings. The rotor is levitated in a magnetic field, so the absence of oil lubrication eliminates the efficiency losses that can occur when oil fouls a chiller’s heat exchanger tubes. The compressor’s oil-free operation eliminates the problem of inadequate oil circulation at part-load conditions. It also makes for minimal noise and vibration — ideal for a school environment.

Located in Toronto’s East Bay waterfront, the Corus Quay building serves as the headquarters for Corus Entertainment, one of Canada’s largest integrated media and entertainment companies. The eight-story, 564,000-square-foot building houses a fully integrated digital infrastructure to accommodate radio and TV studios, among other areas of production.

The building is a recipient of LEED Gold certification by Canada’s Green Building Council. Sustainable features include reduced power and water consumption (greywater and rainwater recycling systems); energy-efficient lighting; a five-story bio-wall, located in the building’s atrium, for air filtration; and use of recycled building materials.

Following the building’s opening, nearby land ownership changes resulted in the decommissioning of the building’s temporary energy plant, located across the street. As part of the Toronto waterfront’s new energy master plan, project owner Enwave Energy Corp., a public-private partnership organization, recommended that Urban Corp. build an in-house plant at the building with future district energy connection potential. A detailed design and construction plan was completed for the new plant to serve the existing Corus building while providing energy to newly planned buildings.

The project demanded more than just high energy efficiency and redundancy. New chillers also had to support the district energy program and have quiet, vibration-free operation around sensitive broadcasting equipment. 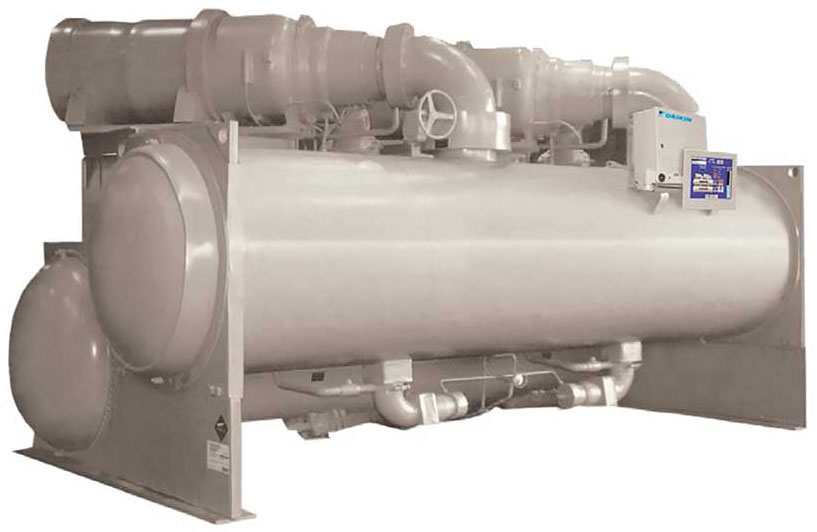 “A lot of technology in the building is mission critical and includes a data center,” said Paul Pilutti, director of Canadian operations at HTS Engineering, Daikin’s manufacturer’s representative in Toronto. “Loads in the building are also intermittent because of the radio and TV stations located within various areas of the structure. The high-heat generating production equipment must be operable for the broadcast facilities at all times.”

As specified by the master plan, the new in-house plant was built and installed on the roof of the Corus building. Two Daikin 880-ton dual-compressor centrifugal chillers and 20 Daikin air handlers were among the primary HVAC equipment chosen for their dual-compressor design and energy efficiency.

The Daikin equipment comprises one of two remotely operated district energy plants, slated to serve nine buildings in the East Bay waterfront district by the end of 2018. The chillers more than accommodate the Corus building’s 700-ton load and will also cool future buildings in the district’s energy network. Additionally, the dual-compressor chillers also support the Corus building’s critical need for redundancy. One of the chillers is connected to a backup electrical generator to avoid disruptions during power outages.

“The use of VFDs on the compressors is somewhat unusual for dual-compressor chillers, but we did it for this job to gain greater load efficiency … to let the machines unload as efficiently as possible,” said Kevin Little, director of the industrial sales group at HTS Engineering.

The Daikin dual-compressor chillers provide installed costs savings of up to 35 percent, versus installing two separate chillers, per the manufacturer. The building’s central plant includes cooling towers, heat exchangers, and pumps, as well as two boilers at a total capacity of 20,478 MBH. The system is designed to import and export chilled and hot water from the district energy system.

The plant operates remotely from Enwave’s Toronto facilities. The energy performance of the chillers and other equipment is monitored on the building automation system and delivered on expectations for the LEED-certified building.