Radiant heating keeps people safe and comfortable, regardless of the season

What do a commuter train platform in snowy Minnesota, a football field in Colorado, and an indoor pool complex in Texas have in common?

All three are slippery when wet. All three contain the potential for trips, slips, and falls. And all three use radiant heating — including, ironically, the pool, a hot water application itself — to make sure the people who tread those surfaces stay safe.

The Northstar commuter rail provides a critical link for commuters along one of the most congested corridors in Minnesota, where trains shuttle from Big Lake, located about 40 miles northwest of the Twin Cities, to downtown Minneapolis. The main station, located in Ramsey, has two main passenger platforms and a pathway to a large parking garage.

Each platform is 425 feet long and 26 feet wide. And at the height of a frigid, snowy Minnesota winter, a smooth concrete surface is ground zero for falls.

To keep riders safe, an Uponor snow and ice melting system was installed. The system is designed for 50 percent glycol solution, heated by a high-efficiency boiler. Crosslinked polyethylene (PEX-a) tubes, embedded in the platforms, circulate the water/glycol solution and heat the platform surface until it is warm enough to melt snow and ice.

“One of our biggest concerns was to ensure that the supply and return piping to the manifolds did not compromise the structural needs of the system,” said Greg Koba with Klamm Mechanical, the snowmelt installation contractor. “By using large-dimension tubing to feed all the manifolds, we were able to route the system efficiently and correctly.”

Klamm laid down a total of 48,000 feet of tubing for the Big Lake station, using Uponor’s Wirsbo hePEX™ ¾-inch tubing for the two platforms. Six manifold boxes, each housing 20 TruFLOW™ Jr. supply manifolds that feed the ¾-inch tubing, were placed every 85 feet and embedded in the sidewalk butting up to the platform.

Each platform also has eight 2-inch PEX main lines that run from two manholes in the landscape area, then enter the slabs and stub into the manifold boxes. The manholes connect through a 16-inch jacket, housed underneath the track that also holds two 4-inch main lines that supply the platform, keeping the platform safe for riders, despite the weather.

In Denver Broncos lore, it’s known simply as “The Drive” — a magical display of calm and determination in the last five minutes and two seconds of the 1987 AFC Championship game. Quarterback John Elway led his team 98 yards in 15 plays to tie the game with 37 seconds left in regulation. The Broncos eventually won in overtime, 23-20.

Fast forward 26 years to the Denver Broncos training facility in Englewood, Colorado. A crew tasked with installing a hydronic turf heating system under side-by-side practice fields felt similarly backed into a corner. The project, which typically would take up to six months to complete, had to be installed between February and April 2013, and the natural grass turf had to be back in place in time for April practice sessions.

The Broncos training facility has two outdoor natural grass playing fields and one synthetic field. Prior to this project, only one grass field was heated, using an electric soil heating system that was outdated and expensive to operate. The project called for constructing a boiler room, removing the turf and top 8- to 12-inch layer (the “root zone”) of sand-based soil, installing 210,000 feet of ¾-inch RAUPEX (PEX-a) Non-Barrier pipe, and connecting it to two 6.5-million Btu boilers that would power the hydronic heating system.

Throughout the football season, warm water is circulated through the RAUPEX pipe to maintain a root zone temperature of 60°F. The objective, said Brooks Dodson, head turf manager for the Broncos, is to keep the field from freezing. Keeping the root zone temperature within the optimal range throughout the season provides a safer, more playable surface for the athletes.

“With the value of the athletes these days, the field condition for practice is much more important and gets a lot more attention,” said Dodson. “If a guy slips on a field, it’s not acceptable.”

System performance is controlled by a Rehau Smart Controls system that allows for remote monitoring, freeze control monitoring, and control of the root zone temperature. (When the Broncos made it to the Super Bowl in 2014, Dodson shut down the practice facility’s heating system from his New York hotel room.)

Dodson said the new system heats both natural grass practice fields for less than it cost to heat one field using the old electrical system. In December 2013, when temperatures hit minus 10°, the heating system underneath the practice fields maintained root zone within 1° of the 60° target temperature while only requiring the boilers to fire at 70 percent capacity.

Texas might not be top of mind when thinking about radiant heating. But pool decks everywhere dry more quickly when there’s radiant heat involved. 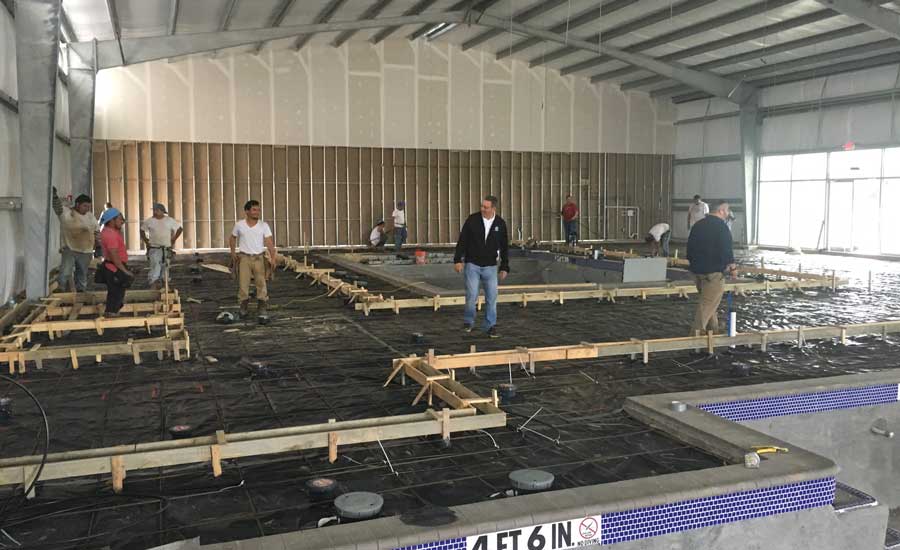 WET HEAT: At the Fins pool complex, 3,000 feet of PureFlow PEX Barrier tubing were installed in the concrete slab.

FINS is a swim instruction company located in the Houston area. In 2017, Bill Goudeket, president and CEO, decided he was ready to build his fourth location: FINS of Cypress. The newest location features radiant heating from Viega to keep students comfortable in and out of the pool and changing areas. The idea was to keep swimmers, especially kids, comfortable so they would have more fun swimming and be able to focus on improving their skills.

The decks of the pool are heated with radiant, as are the changing areas.

“I’d heard about radiant heating a long time ago, and I thought it would be a big benefit to what we do,” said Liam Goudeket, aquatics director for FINS. “We don’t get long cold snaps in Houston, but we want to make it warm and comfortable indoors for whatever the weather.” 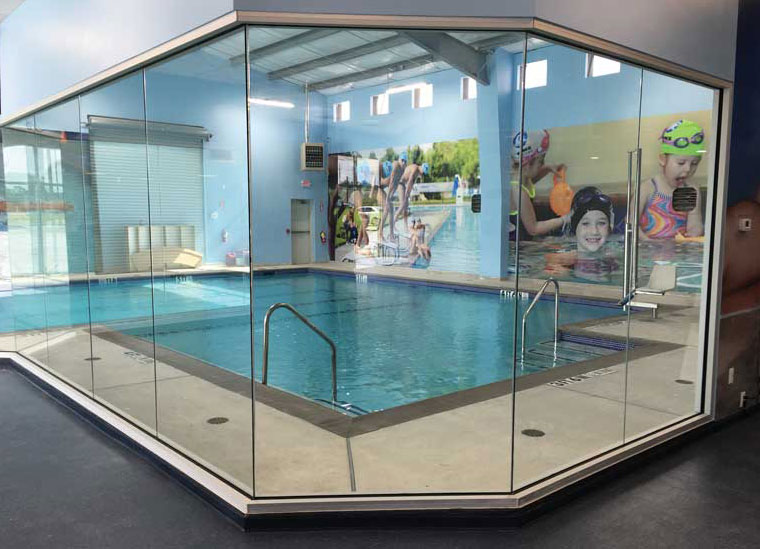 SURE FOOTING: Radiant heat in the pool decks and changing rooms keep swimmers and spectators comfortable and help evaporate water on the floor so people are less likely to slip.

Raymond Nelson Plumbing ran the installation, installing 3,000 feet of PureFlow PEX Barrier tubing — 11 loops — in the concrete slab. In the finished building, radiantly heated areas make up about 1,200 to 1,500 of the total 8,000 square feet.

“I thought there was no way we’d get it done with only two days to put it in,” Nelson said about the radiant tubes. “But we zip-tied it to the rebar, and it went really quickly. I was surprised to get it done in that time crunch.”

In creating the new heating system, FINS wanted to make sure that parents, spectators, and staff who are not in the water are still comfortable. Viega’s design team worked to create a system that would decrease the overall amount of energy used to heat the space, keep occupants more comfortable, and reduce slipping hazards by evaporating water on the pool deck faster.

“Our air heaters kicked on a lot less in this facility over the winter [with the radiant],” Goudeket said. “In the shower area, the kids walk out and into the [warm] changing area, and I think that’s the biggest benefit.”