How the Tariff Increase Is Affecting HVACR

White House counts on the economy to buffer consumers

“They need us more than we need them.” Paul Teller bottom-lined the belief underpinning President Donald Trump’s China trade strategy during some Q&A with distributors attending the annual Heating, Air-conditioning & Refrigeration Distributor’s International (HARDI) Congressional Fly-In in Washington, D.C., on May 15.

Teller is the special assistant to the president for legislative affairs. Five days earlier, the administration raised tariffs up to 25 percent for a quarter of a billion dollars of Chinese exports. Before the HARDI Fly-In could commence, China had already responded in kind, raising its own selected tariffs to between 5 and 25 percent. 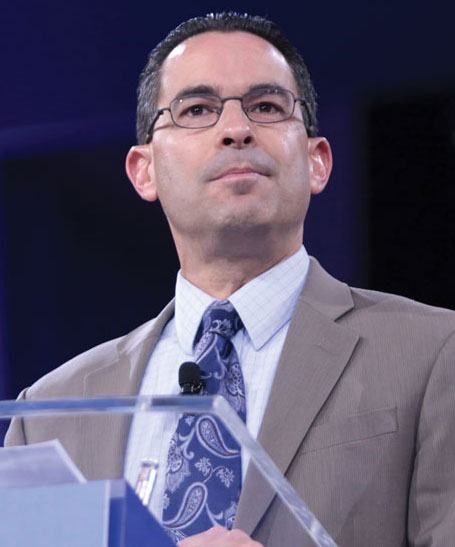 TAKE ONE FOR THE TEAM: Paul Teller, special assistant to President Donald Trump for legislative affairs, spoke to a HARDI audience last month and defended the current policy of escalating tariffs as beneficial for long-term U.S. business interests. PHOTO COURTESY OF GAGE SKIDMORE VIA CC 3.0

“We are extremely aware of the harm that China has been doing to us through theft of intellectual property [and other foreign-ownership regulations],” Teller said, citing the stated rationale for the latest salvo in the two countries’ trade conflict. “We’re also aware of the harm that a protracted trade war does to the American economy.”

Teller told the room that the administration thought it had been very close to a deal in its most recent negotiations, and was disappointed that, in its estimation, China pulled back regarding items on which it had already agreed. While the U.S. has consistently been the party to up the ante, starting with the first round of tariffs last year, Teller described a piece of Chinese counter-strategy as he sees it.

“In a perfect world, the Chinese would retaliate on the things we’re putting tariffs on, but they’re not doing that,” he explained. “If we put tariffs on electronics, they’re putting tariffs on our farmers. They’re smart enough to know it’s a huge, huge hit, and that farmers tend to live in rural, Trump-supporting areas.”

The Air Conditioning, Heating, and Refrigeration Institute (AHRI) continues to look at the consequences of Chinese retaliation less as a shot at the president’s rural base, or as an overdue defense of intellectual property, and more as a drag on business topped by a layer of extra expense.

“AHRI has opposed these tariffs since their inception because our industry needs tariff-free access to global consumers and suppliers,” said Stephen Yurek, AHRI president and CEO.

Referring to his own constituency of manufacturers, Yurek reported that 67 percent of AHRI members oppose the steel and aluminum tariffs, and 60 percent oppose the tariffs on Chinese imports. There are indirect costs as well, he said.

“Our members are negatively affected not only by the increased cost of material but by the increased administrative costs associated with changing their supply chains and requesting tariff exclusions from the government,” he relayed.

Yurek closed his statement by referring to the end result that no interested party likes to think about.

“Despite our members’ best efforts,” he said, “consumers may see the effects of some of these higher costs.”

AHRI’s is not the only membership whose opposition to the tariffs has been recently documented. Todd Washam, newly promoted to vice president of public policy and industry relations for ACCA, spoke to The NEWS about that group’s own membership survey on the topic.

“The tariffs are certainly having an impact on our members,” said Washam. “These contractors are reporting 10 to 20 percent price increases [in equipment costs], which is driving up consumer costs significantly.”

In all, the member survey providing those numbers found that 88 percent of respondents said the steel and aluminum tariffs are affecting their businesses and their customers.

When asked if any ACCA members are actually discussing what amounts to price increases with their customers, Washam noted that commercial contractors, especially, are often getting ahead of the conversation, given the nature of their contracts and relationships.

ACCA has provided some messaging support and best practices advice to its membership at large, though, on how to communicate on the topic. Essentially, Washam said, that guidance is to just tell the truth.

“Tell them that this is the result of spats between the U.S. and China and other countries that are driving up these costs,” he said.

Washam did not see evidence of typical contractors finding any silver bullet for absorbing the added costs themselves, acknowledging the continued usual pressures of running a business successfully. He did, however, cite a rare case of a contractor trying to find some relief from added cost pressures on the other side of this equation, even if he was not at liberty to name names.

“There’s a large contractor who has quite a bit of buying power,” he said.

Recognizing its unusual leverage, that contractor “has pushed back and told manufacturers to eat the price increases.”

The administration may have been off base and on the record when a spokesman told a television interviewer that he did not expect any Chinese retaliation from the first wave of tariffs imposed in 2018. And at this juncture, there is no doubt that tariffs are increasing the amount Americans must pay for certain HVAC work and equipment.

However, one factor continues to work in the White House’s favor. In this sector, at least, the increased prices have not affected purchasing decisions.Washam recounted how, at the outset of this conflict, ACCA feared that added cost for consumers would push them toward temporary fixes and away from system replacements when they are needed.

So far, the association has not seen that scenario develop.

“I don’t know what to attribute that to other than possibly that Americans have quite a bit of money in their pockets right now,” Washam surmised. “The economy’s good. So, maybe the consumers aren’t feeling the pinch or aren’t as concerned about that pinch right now. Contractors are still reporting very strong sales. So it hasn’t affected consumer decision-making as far as we can see.”

THE HEAT IS ON

The future remains cloudy, but Washam’s observation tallies pretty cleanly with the near-term evaluation of the International Monetary Fund (IMF). Eugenio Cerutti, Gita Gopinath, and Adil Mohommad posted an assessment of the larger-scale economic impact on IMF’s blog on May 23.

“While the impact on global growth is relatively modest at this time, the latest escalation could significantly dent business and financial market sentiment, disrupt global supply chains, and jeopardize the projected recovery in global growth in 2019,” the trio wrote.

While some Americans may not feel enough of a sting from increased prices to alter their behavior when it comes to HVAC investments, the IMF authors reiterated that “consumers in the U.S. and China are unequivocally the losers from trade tensions.”

In its own statement, the U.S. Chamber of Commerce did not paint a happier picture. After last year’s $150 billion first round, the Chamber commissioned a study predicting that U.S. tariffs and retaliation would put 455,000 jobs at risk, an estimate that would presumably only increase in light of subsequent escalation.

After the two countries’ most recent volley, the body’s executive vice president and head of international affairs, Myron Brilliant, emphasized the Chamber’s desire to see the two countries reach a comprehensive, enforceable solution to end the tariffs that he described as being “in neither country’s interest.”

Teller sympathized but ultimately disagreed. The president “doesn’t want tariffs to last … nobody wants an escalating trade war,” he said back at the HARDI session.

“But if we don’t get out from under what China has been doing,” he argued, “disadvantages to American businesses will continue.”

ACCA will consider resampling its membership’s sentiments on the subject in the fall, if the tariffs are still in place. Until then, expect temperatures and equipment prices to stay higher, with industry attention divided between potential trade progress and any shifts in domestic consumer behavior.