WISCONSIN DELLS, Wis. — The ninth annual Lennox VisionTECH conference, held at Glacier Canyon Lodge, was a day-and-a-half celebration of all things Lennox and all things HVAC. About 100 attended on Monday, April 8, and more than 600 attended on Tuesday, April 9, including high school administrators; students and parents; college instructors and students; and Lennox dealers and contractors, who brought their teams of installers, service technicians, salespeople, office staff, and owners, as well as their trucks, tools, and talents.

VisionTECH was created by the Vision Committee of the Dealer Advisory Council and Lennox Milwaukee District. The event was spearheaded by Dave Chatmon, a district manager at Lennox. The event’s short schedule originated because business owners don’t always have the luxury to spare technicians for training. 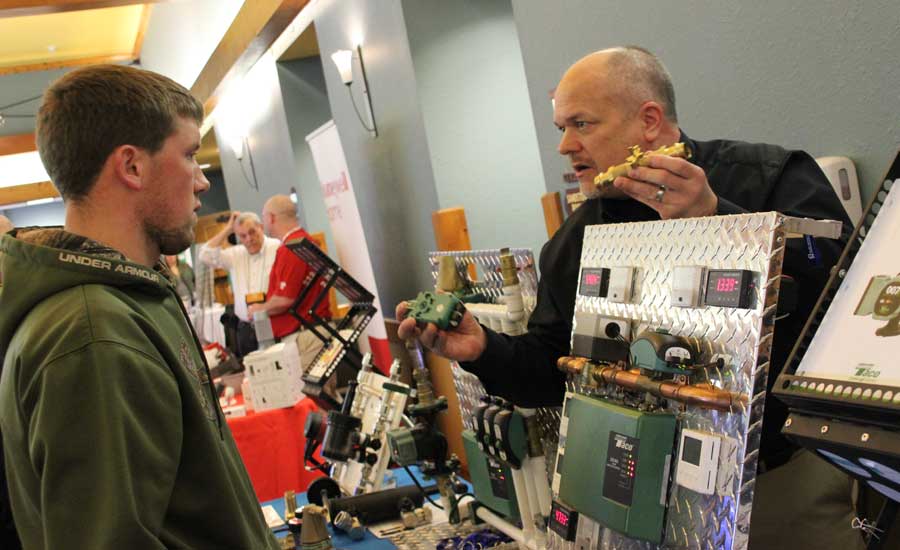 NEW ON THE MARKET: A student visits a booth in the vendor hallway of the VisionTECH conference, and learns about Taco’s hydronics products.

“We created this event based on our needs from the field,” Chatmon said. “When I was a dealer, my techs were always going to training. I would promise Mrs. Smith her furnace would go in tomorrow, and Steve would say, ‘Dave, I told you two weeks ago, I’ve got training that week.’ Now I’m calling her begging for forgiveness … And I thought to myself, wouldn’t it be smart if a distributor or manufacturers got together and said ‘in one day, we’re going to train on all platforms’? For one day, I can shut down my business and have a good six months of platform to study from … learn, and then get back to business and making money.”

NOT JUST HEATING AND COOLING

HVAC is not just heating and cooling anymore. That was the takeaway from Tuesday morning’s keynote speaker, Kim McGill, vice president of marketing for Lennox.

“There aren’t many industries now where you know without a doubt there’s going to be a future for you,” she said. “Health care … people are going to keep getting sick. Funerals … that’s a little morbid,” she quipped. “And HVAC — you can chart your own course, control your own destiny, and own your own business one day.” 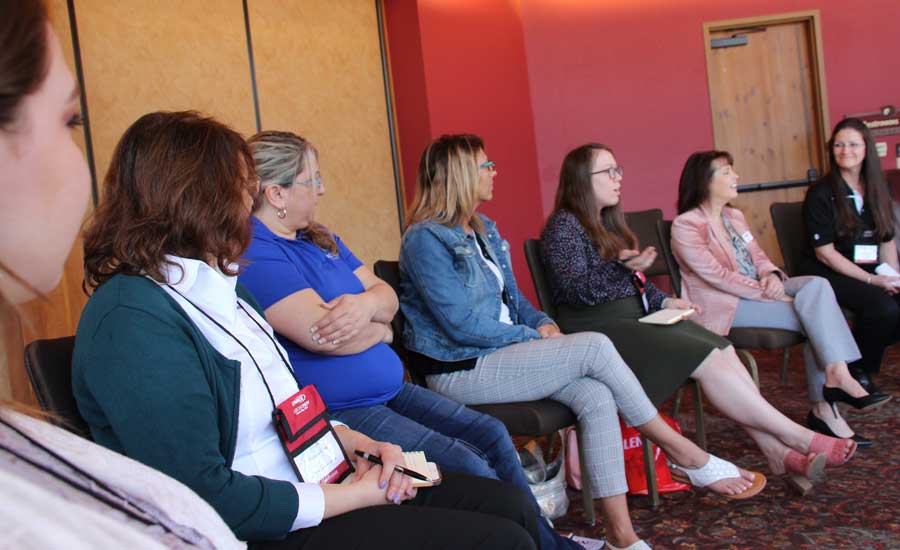 LADY LEADERS: At the Women in Lennox Leadership meeting on Tuesday morning, several dozen businesswomen discussed amplifying the female voice in a male-dominated industry, and how to connect with the next generation of buyers.

Somehow, America has decided that trade school or tech school is a consolation prize, McGill continued. But HVAC technicians are home comfort doctors, and that needs to be celebrated.

“As long as people occupy a space, it needs to be heated and cooled,” she said. “This isn’t just an industry where you’re affecting heating and cooling. You’re affecting lives. Because people deserve to be comfortable in their own home. We’re on a quest to create the perfect environment. Or as we like to say, we’re in pursuit of perfect air.”

Then, attendees set off in pursuit of that goal, engaging in breakout sessions and hands-on training throughout the rest of the morning and into the afternoon. 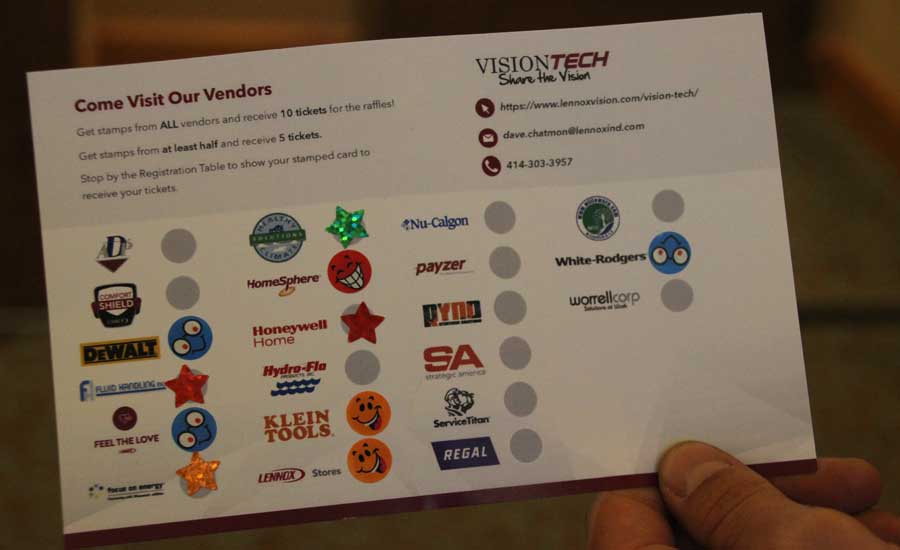 GOLD STAR: Students at VisionTECH had the opportunity to visit vendors, get stickers from them, and redeem their card for raffle tickets.

The sounds of hammering resounded from one side of the hallway as techs went over the basics of sheet metal layout fabrication. Other service and installation classes covered mini splits, refrigerant technology, airflow, communicating controls, and boiler system components. Those interested in sales and back-end operations attended sessions like “Optimizing Technology for Your Business,” “The Truth About HVAC Internet Marketing,” and “Connecting With the Female Buyer” (who comprise 85 percent of the decision-makers in an HVAC sale).

Vendors lined the hall, including a representative from the Lennox “Feel the Love” program, who spoke during Tuesday’s lunch about the community program, formerly known as Heat UP.

High school students had their own set of four one-hour breakout sessions, taught by Lennox personnel and college instructors, that highlighted the benefits of a career in HVAC.

“You guys are busting your butt to get people in to schools; you tell me that all the time,” Chatmon said. “So we decided to roll up our sleeves and help you out in the fight.” 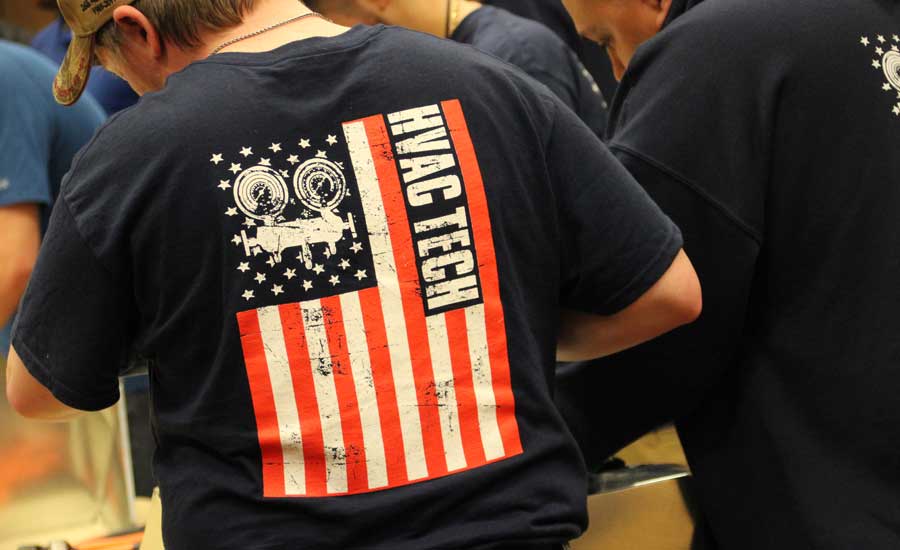 LOUD AND PROUD: Students from Moraine Park Technical College found a patriotic way to display their industry pride, and wore matching navy hoodies or T-shirts with a flag and some HVAC flair.

Jill Heiser is a student at the HVAC program at Western Technical College in Wisconsin.

“I knew I didn’t want to sit down for the rest of my life and work at a desk, so I decided it would be a good idea to go to a field where you’re up, around, moving,” she said. “Next year, there are going to be 115,000 [HVAC] jobs in the U.S. that are going to be needed. I know there’s good job security behind it. I can go anywhere in the U.S., anywhere in the world, even, and find a job.”

Heiser is in her second year attending VisionTECH. A graduate as of April 20, she’s looking to move back to Madison and find a job there, and she liked the opportunity to connect with someone from that area.

“[My school] was newly renovated, so we had a whole lab of equipment to work on,” she said. “It was a lot of hands-on, which is exactly what I wanted to do.”

VisionTECH also held its seventh consecutive year of interviews-to-hire sessions, giving high school students the opportunity to interview for real jobs. Contractors/dealers had a chance to talk to some of the best, brightest, and most motivated students coming up on the HVAC scene. Since the program started, 72 students have been hired.

Some friendly rivalry was on order, too, as the event featured both education and competitions. On Tuesday morning, the lot outside the conference area was lined with vans for the service vehicle competition. Winners earned trophies, marketing funds, and (of course) bragging rights that their design stood out from the rest. 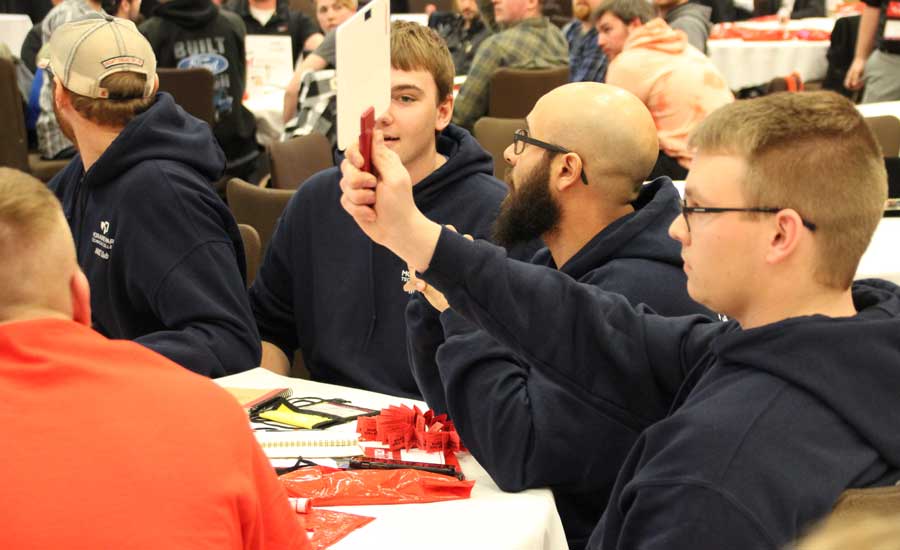 THIS IS JEOPARDY: Attendees compete in the TechWarZ competition, a Jeopardy-style tournament (yes, it includes the “Jeopardy” theme song) that covers all things HVAC.

The event culminated with the 2019 TechWarZ competition, a Jeopardy-style battle of the minds. Attendees packed the big conference room, where teams had 30 seconds to come up with the right answer to a multiple-choice question, sourced from the workshops and sessions that conference guests had just attended. Dealers competed with other dealers and colleges with colleges to win prizes for each person on the first-, second-, and third-place teams. The “Jeopardy” theme song played across the loudspeakers until one champion remained in each group: Western Technical College in the schools category, and Kowalski Heating & Cooling, McMurray, Pennsylvania, in the dealers section.

Don Dyer is a Lennox district manager and attended the Wisconsin event, traveling from Charlotte, North Carolina. He’s been with Lennox for 11 years; he started off getting an associate degree in electronics and working as an installer at an air conditioning company, then moved into sales and operations. 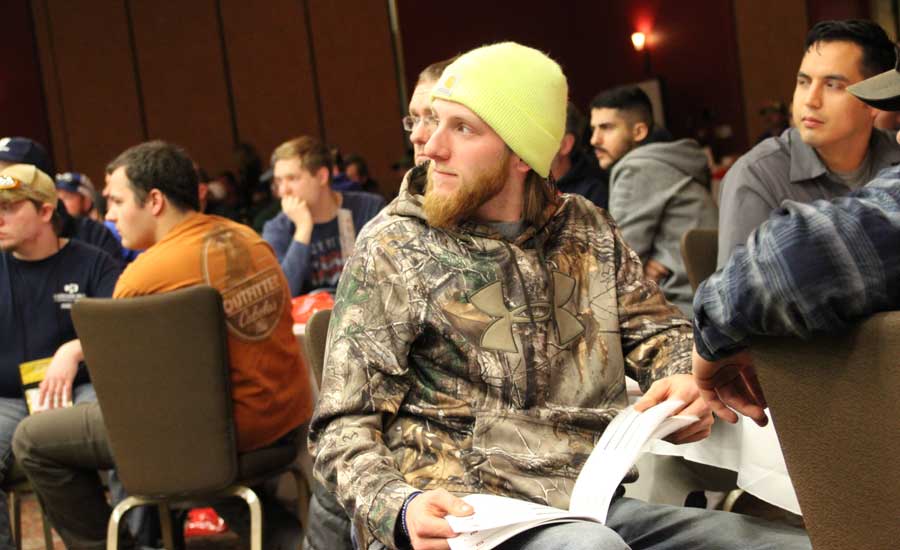 DAY OF LEARNING: A young technician watches the speakers at the second day of the Lennox VisionTECH conference.

“Coming here and seeing some of the hands-on things that the college students are doing, and seeing the looks on their faces, like they’re so engaged, and they’re having fun with it … Some of them may come away from here saying, ‘that makes sense to me, that’s something I can be part of,’” he said. “What Dave is doing here is so much bigger than just trying to sell air conditioners. This is about giving people opportunity. It’s about inspiring somebody.”

Don Dyer and his wife, Sheree, plan on bringing VisionTECH to Charlotte in the future.

“We plan on bringing the best scalable model we can bring back … and still be a realistic investment,” he said. “We need to attract people to the industry. Our customers are dying on the vine for lack of [employees to do the work that’s needed].”

Sheree Dyer said she wants to pull from other labor markets and job search organizations, in addition to colleges, to fill the ranks.

“We’ve got to break the mold and create awareness that the trades are an acceptable career,” she said.