Georgetown University (GU) in Washington is a leading academic and research institution, classified as a Very High Research Activity University by The Carnegie Foundation for the Advancement of Teaching.

Completed in 2012, Georgetown’s Regents Hall is a state-of-the art research and teaching center for biology, chemistry, and physics. With 154,000 square feet of research space, it houses three classrooms, 12 teaching labs, and dozens of research labs, in addition to conference rooms and student lounges. Knowing the enormous utility costs associated with running a science facility, Georgetown’s Energy and Utilities department invited Aircuity to evaluate how its platform could help reduce energy consumption while improving lab safety.

Aircuity assessed the labs on an individual basis and determined that 65 were a good fit for the application of demand-control ventilation.  A proposal with a calculated annual savings was presented to GU management, and the project soon got underway.  The system installation took three months with very minimal impact to research and teaching activities.  Subsequently, the new control system was commissioned in May 2017.  Within the first year, the actual energy savings equaled nearly $124,000.

Soon after completion, Georgetown’s analytics identified five areas of opportunity that the university could address to reach its full savings potential. 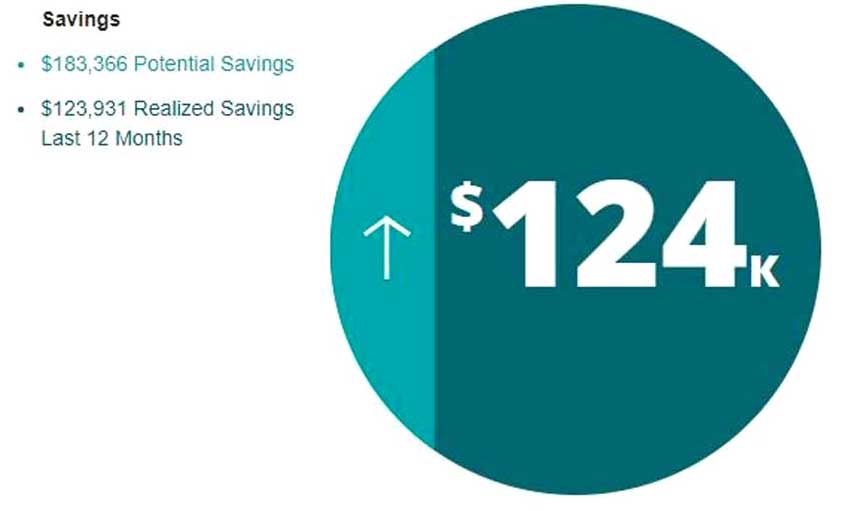 Data from the Aircuity system showed that 10 fume hoods were left at full operational height continuously for several weeks. With each hood averaging roughly $4,500 per year to operate (roughly the same utility cost as a house), the ability to easily identify issues and modify behavior relative to these hoods provides for significant savings. Had these 10 hoods remained fully opened for year, it would have cost the university $45,000.

Using this information, environmental and occupational safety manager, Casey Cahill, worked with science building manager, Kavita Tanksale, along with researchers and students, to ensure these sashes are closed when the fume hoods are not in use.This action has achieved a measurable improvement.

There were 13 rooms with cfm higher than their targeted rates. These excess flows total 2,745 cfm, or approximately $13,725 in missed energy savings.

These events are all within normal operating parameters and are sufficiently ventilated by the system.They caused an excess flow of approximately 750 cfm.

Fume hoods were found going to their max based on occupancy, not sash position.Adding up the combined cfm that these hoods are running over their minimum, during the occupied periods (approximately 8:00 a.m. to 8:00 p.m.), the difference between the min and max flows is a combined 7,500 cfm.This issue was seen during 60 of the 168 hours in a week, or 35.7 percent of the time.

Estimating that a researcher works in their fume hood about 10 percent of the time, there is opportunity for saving 6,750 cfm.

Increased fan power for more duct static in one room

Aircuity’s lab ventilation energy model was run with an increase static of 20 percent at the exhaust fans only (1.5 to 1.8 = 20 percent).There was roughly 70,000 kWh attributed to the increase.

In addition to understanding the full savings opportunity, Georgetown’s Environmental, Health & Safety Department used the information displayed at the Aircuity portal to verify the high performance of rooms, relative to indoor environmental quality (IEQ).  The MyAircuity web app automatically ranks the rooms by their IEQ performance. Cahill looked at the analytics and immediately identified a room that had considerably more IEQ events over the prior two weeks. Armed with this information, he went to the specific room to contain the source of the contaminants.

Using the Aircuity 2.0 Platform, Georgetown University has delivered energy savings in an already cutting-edge building, gained quick and easy access to actionable information that is valued by multiple stakeholders, and created measurably better environments for all occupants.

Currently, Georgetown is developing a second project for its main campus.