PHOENIX — The International Institute of Ammonia Refrigeration (IIAR) welcomed more than 1,600 attendees and 150 exhibitors to its annual Natural Refrigeration Conference and Expo. The three-day event provided extensive opportunities to learn more about how natural refrigerants such as ammonia, CO2, and hydrocarbons are being used in refrigeration applications.

This year’s conference was a little different, as IIAR partnered with the North American Sustainable Refrigeration Council (NASRC) to offer a dual track of technical papers, panels, and workshops. The Commercial and Food Retail Refrigeration track featured presentations on topics ranging from low-charge ammonia systems in grocery stores to the first and only propane/CO2 cascade system in a North American supermarket. 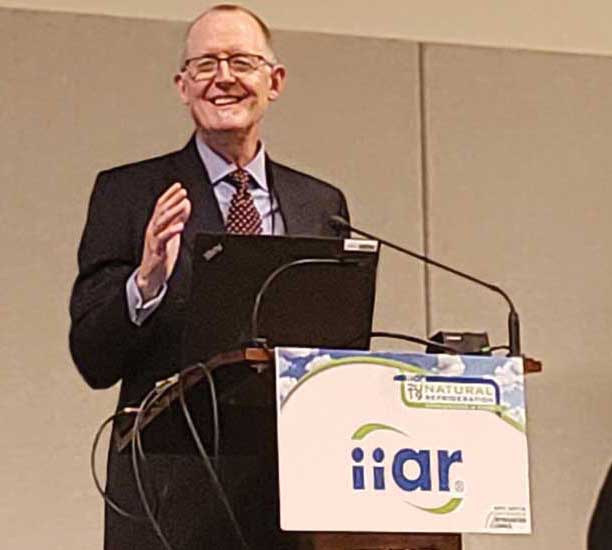 Chairing the task force on HCs used in rack refrigeration systems is Bruce Nelson, president of Colmac Coil Mfg., who noted that IIAR is uniquely qualified to develop a safety standard for this natural refrigerant.

“We’re fully capable of developing ANSI-approved safety standards, establishing best practices and handbooks, and educating and confirming compliance and competency with this information,” he said. “The results of the hydrocarbon task force were taken to the board of directors, voted on and approved, and work has started on an IIAR safety standard that is expressly for hydrocarbons.”

This safety standard will exclude HC self-contained units, which currently have a charge limit of 150 grams per refrigeration circuit, because this type of equipment is covered by UL standards. 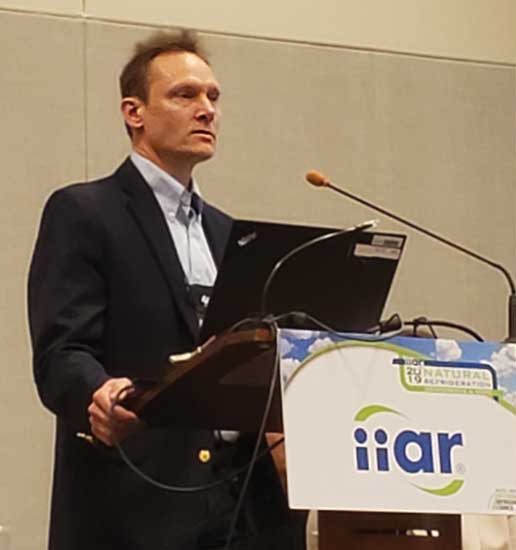 As far as CO2 is concerned, John Collins, industrial sales manager for Zero Zone Inc. and chairman of the IIAR CO2 task force, was happy to announce that on March 1, IIAR moved its new CO2 safety standard to public review. Titled “Safety Standard for Closed-Circuit Carbon Dioxide Refrigeration Systems,” the standard was open for public review until April 15.

“When we started developing the CO2 standard, we distinguished the document as being limited to minimum requirements for providing safe systems,” said Collins. “It is not intended as a best practice design guide. It is written in code language and is intended to serve as the basis for model code compliance for closed-circuit carbon dioxide refrigeration systems.”

Kurt Liebendorfer, vice president at Evapco, offered an update on the Ammonia Refrigerant Management (ARM) program, which was published by IIAR in 2005. That document provided guidelines for end users and contractors to follow in order to be in compliance with the Occupational Safety and Health Administration (OSHA) and the Environmental Protection Agency’s (EPA’s) General Duty Clause, which applies to facilities using less than 10,000 pounds of ammonia.

“The new version of ARM — ARM-LC (for low charge) — was published last fall,” he said. “If you have a low-charge ammonia system that is a self-contained single circuit and less than 500 pounds, the new ARM-LC program covers the requirements of these systems to meet the intent of the General Duty Clause from both OSHA and EPA.”

The ARM-LC program consists of two books. The first book is a summary guide that offers information about what is to be expected from ammonia system OEMs, contractors, and end users. The second is a guidebook that provides more specific instructions about low-charge ammonia systems, as well as blank forms and templates that can be used in the field.

“The ARM-LC is an important first step,” said Liebendorfer. “With the next version of this program, we’d like to explore what additional regulations could be removed for systems under 100 pounds of ammonia. The fact that we’re now putting a light on how small-charge systems could be safer may allow more regulations to be rolled back.” 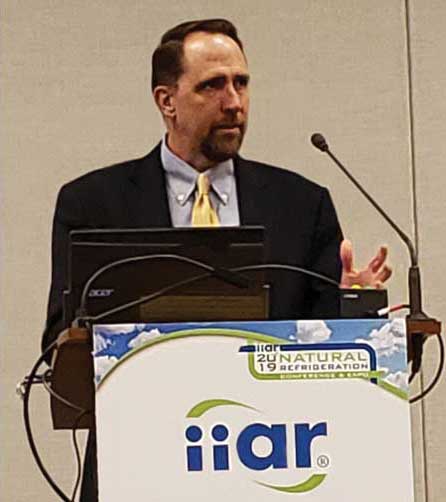 “The current EPA reporting policy for all ammonia releases is 100 pounds, but we believe this is resulting in the overreporting of ammonia releases,” said Randel. “We’re arguing that there are real tangible burdens associated with overreporting, so we are suggesting that there should be a separate reportable quantity level set for aerosol releases.”

EPA decided on the 100-pound reportable quantity level because even a small amount of ammonia released in a water source can kill fish. However, venting ammonia is a different matter.

“We are OK with keeping the reportable liquid release at 100 pounds,” said Randel. “If it’s an issue where ammonia is being vented into the atmosphere, 100 pounds is not really going to trigger any environmental concerns. And if, by chance, people are impacted, and there are evacuations or injuries, the release will have to be reported anyway. Which is why we would like to create a new reportable release quantity of 500 pounds for aerosol releases. We’re hopeful that EPA is going to recognize that we have a good, strong case.”

“The current EPA reporting policy for all ammonia releases is 100 pounds, but we believe this is resulting in the overreporting of ammonia releases. We’re arguing that there are real tangible burdens associated with overreporting, so we are suggesting that there should be a separate reportable quantity level set for aerosol releases.”
—Lowell Randel
director of government affairs at IIAR and principal of The Randel Group LLC

The second initiative is facing some serious headwinds, said Randel. He is surprised by that, because when a facility is dealing with a release, personnel should be focused on stopping the release and mitigating the consequences. Getting on the phone to a national office within 15 minutes should not be the first priority.

“Unfortunately, this is not just an ammonia policy — it covers all chemicals of interest, and I don’t see a lot of momentum moving forward with this policy proposal,” he said. “We’re going to keep pushing it, because it goes hand in hand with the first initiative. This is one where I think EPA is probably going to stand firm. Maybe we can leverage the fact that they’re not going to move on it to help move on the reportable quantity issue.”

The last initiative regarding IDLH levels is gaining some momentum, said Randel. Last fall, IIAR met with the National Institute for Occupational Safety and Health (NIOSH), which offers recommendations to OSHA, to discuss how APRs could be used safely and effectively if IDLH levels were increased to at least 500 ppm.

“The current policy is if it’s over 300 ppm, you can’t legally use an APR to save yourself or anyone else, even though you can do this safely at 500 ppm or more for short amounts of time,” said Randel. “NIOSH was receptive to our concerns and is in the process of evaluating hundreds of different chemicals for IDLH. Ammonia is on that list of chemicals, and they tell us they will get to it this fall. Once they do their evaluation, which will take about a year, they will make a recommendation to OSHA, and OSHA will ultimately have to make the policy change.”

For an update on these initiatives, as well as the commercial refrigeration standards, consider attending next year’s IIAR Conference and Expo, which will take place March 15-18, 2020, in Orlando, Florida.