The Case of Natural Refrigerants Versus the ‘Super Pollutants’

LONG BEACH, Calif. — Contractors, manufacturers, end users, policymakers, and anyone else with a vested interest in the future of commercial and industrial refrigeration gathered for the ATMOsphere America 2018 conference. The three-day event featured educational sessions and panel discussions that covered everything from technology and market trends to regulatory updates to what the future of the refrigeration industry may look like.

The theme running throughout all these sessions was how natural refrigerants, such as propane, CO2, and ammonia, can be used to help supermarkets, restaurants, and other commercial and industrial refrigeration applications become more efficient and sustainable.

The keynote speaker, state Sen. Ricardo Lara, is known for his tough stance on environmental issues, having recently introduced the California Cooling Act that is designed to further reduce the use of HFCs, which he calls “super pollutants.” California already has ambitious targets in place to reduce HFC emissions by 40 percent below 1990 levels by 2030. The California Cooling Act outlines actions geared toward meeting these targets, in part by providing financial incentives for large end users, such as supermarkets, to buy refrigeration systems that utilize refrigerants that have a low GWP.

The incentive program is financed by the state’s carbon cap-and-trade program and allows end users to invest in low-GWP technologies. Lara noted that one of the key barriers to the adoption of low-GWP equipment is its high first cost, which the incentive program can help mitigate.

“California has a global responsibility to address the issues of global change, but we have to think locally,” said Lara. “Our long-term goal is to reach our 2050 target [to reduce statewide greenhouse gas emissions to 80 percent below 1990 levels], while our short-term strategy is to tackle these super pollutants by 2030.”

One of those low-GWP refrigerants is ammonia, which Pega Hrnjak, a professor at the University of Illinois at Urbana-Champaign, discussed in detail. He said that ammonia is an ideal refrigerant, but due to its high charge in most types of industrial refrigeration equipment, it is not appropriate for populated areas. He noted that in order to expand the use of ammonia across different markets, the charge needs to be reduced, and more equipment needs to be prefabricated, which would result in lower costs, better reliability, and higher efficiency.

Ideally, Hrnjak would like to see ammonia used in HVAC chillers, but he noted that no large manufacturers are currently pursuing this. One reason may be that the measurement of performance is not common in the ammonia systems that are used in industrial refrigeration. He said there needs to be some sort of capacity and efficiency measurement, so that end users can compare ammonia to systems using synthetic refrigerants. There are also some technical challenges, including the need to manufacture ammonia chillers that look and feel like current chillers while costing the same.

“Prices are still too high, we need to reduce the weight, and we need to increase performance the same way as the competition,” said Hrnjak. “And we need to somehow reduce the initial resistance to the technology.”

During the market trends session, refrigeration equipment manufacturers discussed some of the opportunities and challenges that exist in the industry when it comes to using natural refrigerants. 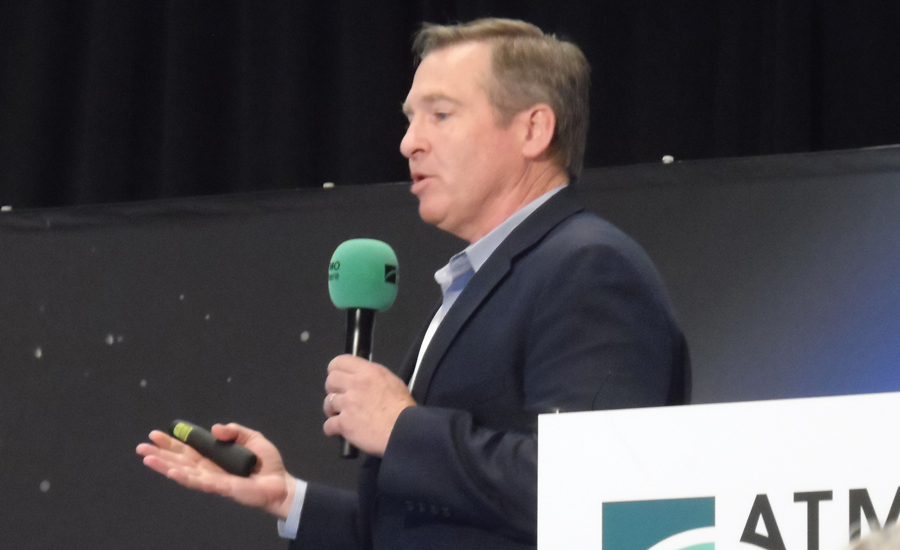 FULL DISCLOSURE: Scott Martin of Hillphoenix discussed how it is incumbent upon manufacturers and installers to explain to retailers about the entire cost of ownership for low-GWP equipment.

Scott Martin, director of business development and industry relations at Hillphoenix, noted that the biggest challenge is first cost, because all retailers are concerned about the premium they will pay for equipment that utilizes natural refrigerants. That is why it is incumbent upon manufacturers and installers to explain to retailers about the entire cost of ownership.

“You need to explain that it’s not just first cost, but the installation cost, the energy cost, the long-term operations cost that includes maintenance, so that they have a total cost of ownership model,” said Martin.

Manufacturers and installers need to help retailers understand the whole return on investment when they choose a natural refrigerant solution.

Another challenge is technician competence, said Martin, as retailers need to have confidence that the technicians know how to properly service the equipment that utilizes natural refrigerants. He noted that his company has been involved in training technicians, contractors, and customers on various forms of refrigeration technology for years. But with not enough technicians currently available to provide service, he said that more advanced control technologies could help fill that void.

John Prall, application engineer at Embraco, noted that there is growing interest in low-GWP refrigerants, including chemical blends. However, when taking into account efficiency and heat build-up in the compressor, he believes that R-290 (propane) is still the best of the new A2L refrigerants by a fairly substantial margin. 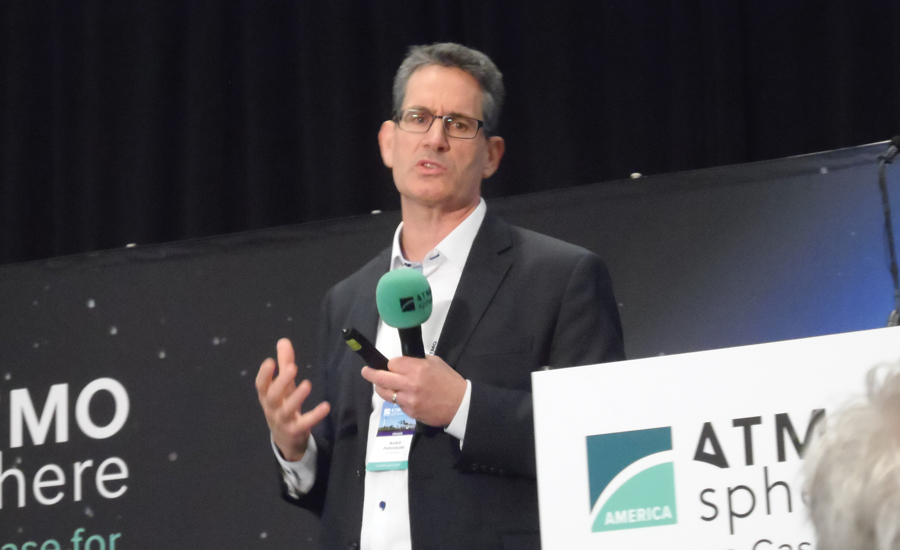 ROLL CALL: Emerson's Andre Patenaude was one of the speakers at the ATMOsphere America 2018 conference in Long Beach.

“We continue to see that R-290 is the best solution for fractional-horsepower compressors,” he said.

One of the challenges to using R-290 is that the current legal limit is only 5.3 ounces (150 grams) per refrigerant circuit, which basically limits its use to smaller equipment.

“We currently have to go to dual circuits for larger systems,” said Prall. “If we could go up to 500 grams, we could cover a significant portion of the refrigeration market, including most small walk-ins, ice machines, and reach-ins. Of course, this does consider that you’d have to have doors on all the cabinets, which for convenience, can lead to a contentious discussion.”

Prall added that in the last 10 years, 30 percent of the market has already transitioned to R-290, and while there has been good growth so far, there is still plenty of room to grow.

“We’re working with the IEC [International Electrotechnical Commission] to significantly increase the charge limit to 500 grams,” he said. “We also have a challenge with ASHRAE Standard 15, which states that you can’t put vending machines containing R-290 in hallways. We need to address that as well.”

A question-and-answer session followed, with conference attendees asking a variety of questions, including why end users should invest in equipment that uses natural refrigerants.