Dehumidfication: Accentuating the Positive of Avoiding the Negative

In an era where consumer focus constantly seems to drift back to what tasks can be done with a smartphone, it is a good business move to notice areas where customers aren’t preoccupied with connectivity — or even budget.

Dehumidification finds itself in one of those sales-potential sweet spots, thanks to an increasingly sophisticated customer base. Recent economic performance may be allowing some customers to think in terms of upgrades that will benefit them, but more importantly, a significant number are beginning to think of health-oriented measures more as standard equipment and less of a luxury or add-on.

Nikki Krueger, industry manager for Ultra-Aire, pointed to recent research by Harvard’s Joint Center for Housing Studies, which stated that 30 percent of all U.S. households expressed concern about some aspect of their home endangering their health in 2018. Indoor air quality was the leading source of concern, driven mainly by worries over moisture, mold, and dust.

Even closer to the front lines of commerce, a Dodge Data & Analytics study — “Green and Healthier Homes” — found that 83 percent of homebuilders and remodelers now believe that home buyers are willing to pay more for a healthy home. (Not that anyone should assume the other 17 percent are looking to buy an unhealthy home on the cheap. This is more about the trending willingness to invest in what might be called preventive quality.)

The data supports what Krueger described as a dramatic increase in homeowner interest in the topic.

Blake Edwards, Lennox’s senior product marketing manager, controls and indoor air quality, sees a similar landscape. In particular, he cited the increase in interest toward HVAC elements that deliver benefits around helping conditions like asthma, or just allergies in general.

“Just removing the mold and the spores and excess mildew that can build over time if a home isn’t being properly dehumidified,” Edwards said.

According to him, there has been an uptick in homeowner awareness of what can start to go wrong when conditions get above and stay above a proper humidity range’s upper limit of around 60 percent.

EFFICIENCIES MOVING UP: In a development that DewAir’s Jim Bridgeman predicts “will inevitably spur technological innovation,” the Department of Energy has mandated new levels of dehumidifier efficiency, effective June 13.

SPEAK UP OR LOSE OUT

Similar to the evolution of mini split use in the U.S., a “new and improved” attitude about dehumidification brings some new questions and decisions with it.

Stand-alone unit to target a specific problem area? Or a whole-home dehumidification investment?

“I think you see a lot of homeowners who tend to immediately go to a stand-alone option because it’s something that they can order,” Edwards said.

“They can put it in an individual room and hope it solves their problems. But [the choice] is the same thing as with a stand-alone unit like an air purifier: It’s not going to have the same benefit as a whole-home option.”

That, in Edwards’ opinion, is a critical juncture for the contractor and/or manufacturer dealer to participate in the homeowner’s process. Most homeowners are probably more familiar (and thus, more comfortable initially) with a stand-alone unit.

The contractor can either provide a directional road map toward a solution, at least explaining the value of a whole-home approach, or the customer will continue on toward a less-informed choice.

Jim Bridgeman, COO for DewAir Corp., added that customers may not be aware that a proper dehumidification system provides these benefits, but once the word gets out, it will spread rapidly.

Bridgeman sees the key parameters for contractors called out to assess and remedy complaints as installation cost, system capacity at the desired conditions, and operating efficiency.

He said that the ideal comfortable living environment (and one that minimizes viruses, mold, and mildew) is 78°F and 45 percent rh.

“Most dehumidification systems have a difficult time maintaining capacity and efficiency under these conditions,” Bridgeman said.

“So the best thing to do is consult the manufacturer and ask the hard questions,” Bridgeman added.

As usual, the perfect assessment, system selection, and purchase won’t do much for the occupants or the reputations of the contractor and manufacturer if installers do a subpar job.

Her company always recommends a dedicated return-to-supply install, in part because the return-to-return approach also reduces the existing air conditioning system’s latent moisture removal. But Krueger understands that sometimes there is only one option.

“As an industry, we need to make sure we are installing the units to be as effective and energy efficient as possible. We see intensive contractor training helping with this.”

While humidity control may be a rare space where connectivity and convenience is not the flavor of the month, this is still the 21st century, and even health-focused consumers love their apps.

Edwards sees that people do indeed prefer using an app or the (increasingly smart, possibly recently purchased) thermostat on the wall, as opposed to dual controllers.

To that end, Lennox works to provide options so homeowners can use a single interface to manage both temperature and humidity. Occupants have the ability to set their set points and let the device pretty much do the rest for them.

And what if there is either no existing ductwork or no remaining space in a mechanical room for a whole-home dehumidifier?

That, said Krueger, is where two HVAC trends come together to present more room to provide a solution.

“There is a growing opportunity for dedicated dehumidification in homes using ductless mini splits,” she said. She cited mini splits’ efficiency at conditioning small spaces quickly, with results being shortened run times and not a lot of moisture removal.

That particular weakness comes as no surprise to Bridgeman, who also extolled the virtues of not overdoing (or not doing at all, really) the common integration of humidity and temperature control.

“This is because, unlike air conditioning that requires a sophisticated forced air distribution system, dehumidified air naturally tends to distribute itself,” removing the need to integrate it into the existing ducting system, he said.

In Bridgeman’s estimation, controlling the humidity without affecting the air temperature enormously simplifies the control strategy as well.

HOUSTON, WE HAVE LIFTOFF

When the discussion turns to specific needs in specific areas across the country, all eyes seem to turn in the same direction.

“In Houston, without supplementary dehumidification, an air conditioner may have to run continuously throughout the year to cope with the humidity load,” said Bridgeman, “often with the undesired side effect of producing overly cool indoor temperatures of near or below 68˚F.”

Complementing Krueger’s note about the effects of high-performance construction, Bridgeman pointed out that City of Houston Ordinance 2014-5 calls for improved thermal insulation and reduced air circulation from seven air changes per hour to five.

While the metropolis officially nicknamed “Space City” for its NASA center may be ground zero for humidity in the U.S., Edwards sees the additional demand expand out of areas like that as well, for people who aren’t even using dehumidification necessarily year-round but who are using it more seasonally to help as needed.

Back in a typical and fortunately flood-free neighborhood, consumer attitudes may not change with the weather, but Krueger concluded with a reminder that they have changed — or at least, that’s the perception among those who make their living recognizing and serving consumer interests.

“We’re seeing a shift [as opposed to] how builders and developers have viewed dehumidifiers in the past,” she said. “It has gone from another piece of equipment to purchase and maintain to an insurance policy.”

Krueger left some uncertainty about whether she meant that added dehumidification is the insurance policy for homeowners against certain health and IAQ problems or a safeguard for new construction builders to avoid home-sales stagnation in a competitive and health-conscious environment.

However she meant it, residential contractors might do well to consider that a distinction without a difference.

DEHUMIDIFICATION ROUNDUP: The Maximum of the Minimums 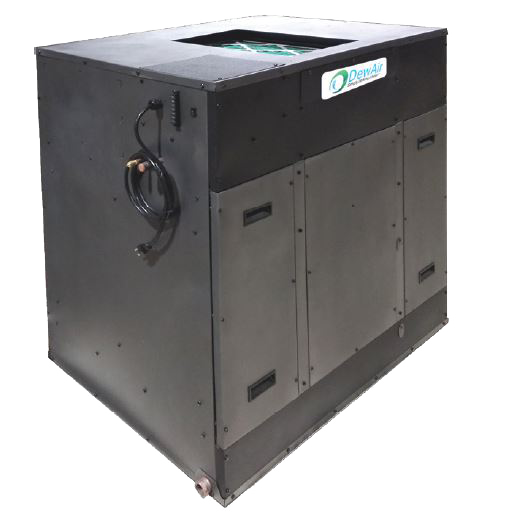 The RH-Cube™ 18 is a high-efficiency, high-capacity, split-air dehumidifier from DewAir Corp. Based on a unique heat exchanger design, its capacity and range are meant

to provide total control over humidity within the entire comfort zone, independent of the temperature setting or status of the air conditioner.

The patented technology accompanies minimal ducting for simpler installation, less constrained electrical supply requirements, and very low energy use and cost of operation, according to the the company.

SHRINKING THE BILL WITHOUT BREAKING A SWEAT 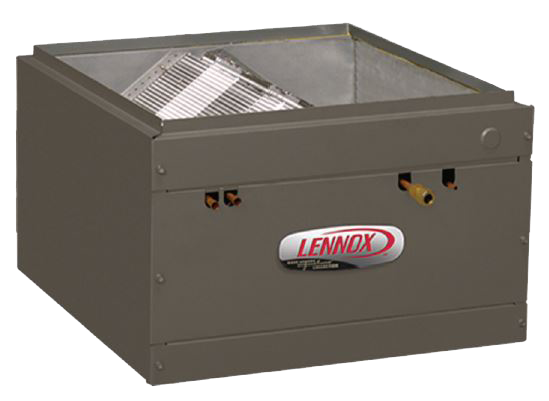 Lennox Humiditrol Whole-Home Dehumidification System removes more than 150 liters of moisture per day. It is installed with the iComfort S30 smart thermostat, streamlining homeowner management of humidity and temperature.

For every 2°F a homeowner raises the temperature during the summer months, they can save between 5 and 7 percent on their energy bill, according to the manufacturer. Dehumidified air feels cooler, allowing homeowners to save money without sacrificing comfort. 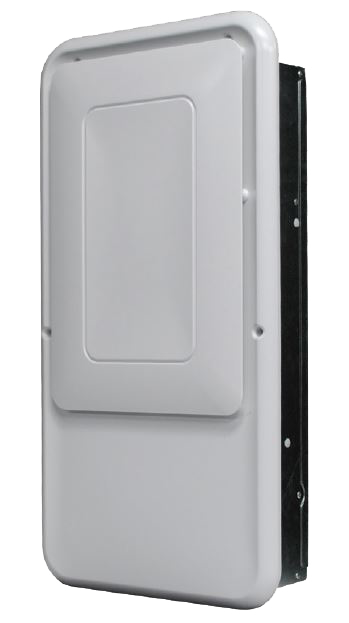 Released just over a year ago, Ultra-Aire’s MD33 is Energy Star® certified and runs independent of the HVAC system. Sized for up to 1,200 square feet, this in-wall dehumidifier is designed to serve multifamily dwellings, adaptive reuse buildings, hotels, senior or student housing, and single-family homes that use ductless mini splits.

A slim profile allows it to fit inside 2-by-6-inch stud walls. The unit can be hardwired or plugged into a 110-V outlet. It is designed to drain directly to provide a hands-off dehumidification system.