This website requires certain cookies to work and uses other cookies to help you have the best experience. By visiting this website, certain cookies have already been set, which you may delete and block. By closing this message or continuing to use our site, you agree to the use of cookies. Visit our updated privacy and cookie policy to learn more.
Home » Contractors Who Haven’t ‘Broken Into’ Smart Homes Are Missing Out
HVAC Residential MarketResidential ControlsThermostats

Contractors Who Haven’t ‘Broken Into’ Smart Homes Are Missing Out

Every contractor goes through a flux in their business.

“There’s nothing worse than looking out the window of your office and seeing a few of your vans in the parking lot, not out in the street helping pay the overhead of your business,” said Gene LaNois, head of pro channel, Nest. “And when you look at what businesses are hot around the globe today, you run into IoT. There’s massive consumer draws.”

Smart home is often outlined by manufacturers as a great business opportunity that HVAC contractors would be wise to take advantage of. But when the rubber meets the road, service vans that say “heating and cooling” are still a lot more prevalent than vans that tout “heating, cooling, and smart home.”

The disconnect, some industry leaders say, stems from the way the industry developed. And if that’s the case, a solution might be found by going back to the roots of the market’s supply chain.

Todd Washam, director of industry relations at ACCA, points to manufacturers for a lack of enthusiasm among HVAC contractors for transitioning their businesses into smart home service. In his view, it’s partly due to a lack of awareness.

“I haven’t seen manufacturers going to contractors with training programs and good marketing campaigns to tell them about the potential for this new market,” he said. “Contractors do need to understand how big this opportunity is. It is potentially as big as the service and replacement market. We’re hearing from manufacturers and distributors who are studying the trends that ... a contractor could be doubling the size of their current business if they embrace these opportunities.” 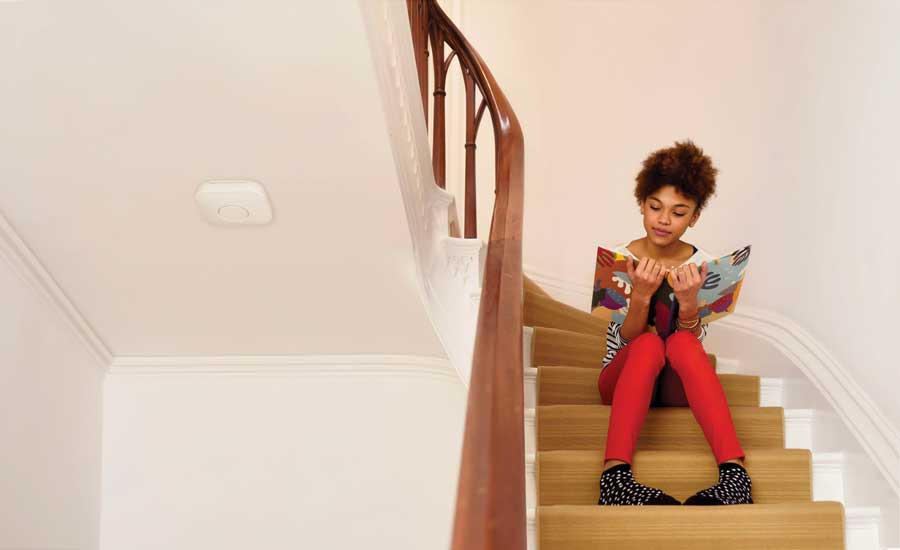 SWITCHING OUT: HVAC contractors who offer smart home services can take advantage of opportunities for extra sales if their customers decide to upgrade other home systems, like lighting, cameras, and doorbells.

Manufacturers say that for HVAC contractors, these opportunities are ripe for the taking.

“When we’re talking about folks that want to stay connected to the things that are important in their home, HVAC contractors are touching so many of those critical systems that not only keep homeowners’ families comfortable, but also touch on safety as well,” said AJ Smith, vice president and general manager of Global Pro Comfort, Resideo.

LaNois said from a basic business standpoint, everything’s in play.

“They’ve already got an up-and-running business,” he said. “It doesn’t require something different from infrastructure standpoint: They can use the same vans, the same ladders and tools, they can use the same labor force. Look a bit deeper, at the skill involved on the HVAC side: from the ability to run and hide a wire, to the ability to work on things that are technically a lot more complicated to install than smart home products. For a contractor, these products are quick, simple, and a fast installation.”

And, contractors already have an existing, potentially interested customer base they can market to.

“With so many customers looking at a thermostat as the easiest and most rewarding way to start off in the smart category because it provides so much energy savings, it really puts the HVAC contractor in a position to utilize what they’ve already built,” LaNaois added.

Ironically, Washam theorizes that this skill set may be the link that manufacturers initially missed.

Part of the reason contractors have been slow to jump on board with smart home, Washam said, is because when smart home products came out, manufacturers left distributors — and, by extension, contractors — out of the equation. Instead, they marketed their products direct to consumer and skipped the traditional network.

“Part of that is going to be the fault of some of those manufacturers,” he said. “When products originally started coming out — Nest, ecobee, smart products — they were being distributed through the retail chain.”

Contractors are often not as willing to work on products consumers bought, as that hinders their ability to offer warranties to their clients; hence, a lack of interest in this market.

Skipping the traditional channels also had the effect of skipping over contractor education, so now, manufacturers have got to go back and play catchup in that area, Washam said.

“I’ve heard from one manufacturer, one of ACCA’s corporate partners, that they get a lot of consumers calling their company headquarters and saying ‘Hey, I thought your products were Wi-Fi capable,’” he said. “It’s been reported that [some] contractors working with those systems are telling customers they’re not Wi-Fi capable.”

Why, when the products in question definitely are?

“They don’t want to take the time to learn it, or they don’t understand how to price these opportunities,” Washam said. “Contractors aren’t really very open to talking about it ... and there isn’t a company that is doing an outstanding job [of smart home] and can be held up as role model.”

Erin Mezle is director of marketing at Fujitsu. When it comes to smart homes, transferrable skills are valuable, but they aren’t everything, she said.

“A bigger chunk of it is ... when it comes to connecting routers to Wi-Fi and smart homes, it’s not what they got in the business to do,” Mezle said. “Most smaller contractors are started by installers; it’s just not their strong suit. It’s sort of been an avoidance.”

Craig Rossman, president at White Rodgers, said contractors who are interested in becoming a full-service smart home business need to invest in understanding how networks operate.

“A potential challenge is going to be their knowledge and ability to help the homeowner or user with their network,” he said. They may be called upon to help determine the strength of the signal from their ISP or routers. And internet outages are a reality that can have an impact on the customer’s perception, not only of the product and the manufacturer, but of the contractor who installs that product as well.

“The model is changing. You’re seeing Google, Nest, ecobee starting to get into the HVAC distribution chain more, start to work with the distributors, contractors more. We’ve seen those companies do a lot more marketing in [The NEWS].”
—Todd Washam director of industry relations ACCA

The good news is, manufacturers are beginning to see this disconnect and take steps to correct it, Washam said.

“The model is changing,” he said. “You’re seeing Google, Nest, ecobee starting to get into the HVAC distribution chain more, start to work with the distributors, contractors more. We’ve seen those companies do a lot more marketing in [The NEWS]. They’re starting to embrace the traditional supply chain and work with the professionals who are doing the installing.”

For its part, ACCA, as an industry organization, has been working to bring these opportunities to contractors’ attention: a webinar training early this year in partnership with Fujitsu, which talked about how HVAC systems are being connected to Amazon Alexa and Google Home, and a session at its February 2019 conference that featured a presentation by LaNois, who has been involved with the contracting, distributing, and manufacturing sides and can speak to what the marketplace is currently like.

“Contractors need to understand that if they don’t embrace this, they will be missing out,” Washam said. “Do they want the cable companies, home security companies doing it? The answer to me is no: They want to own the home. I think when the first few start, others will follow suit.”