This website requires certain cookies to work and uses other cookies to help you have the best experience. By visiting this website, certain cookies have already been set, which you may delete and block. By closing this message or continuing to use our site, you agree to the use of cookies. Visit our updated privacy and cookie policy to learn more.
Home » HVAC Contractors Dig Into the Ground, Building One ‘Geo Hood’ at a Time
HVAC Residential MarketResidential Geothermal Heat Pumps

HVAC Contractors Dig Into the Ground, Building One ‘Geo Hood’ at a Time

Geothermal retrofits could be the future of American power

Think of geothermal communities, and places like Whisper Valley, Serenbe, or Pinewood Forest likely come to mind: master-planned mega-developments that are breaking ground by mandating geothermal heat pumps for heating and cooling as a requirement for new home construction.

Looking back 50 years from now, those mega-developments may be the turning point for a new type of home construction in America. But, per Stastica, the U.S. has 136.5 million homes that already exist. With more and more states making commitments to the Paris Climate Agreement, it will take retrofit work, too, to achieve the greenhouse gas reductions dictated: 50 percent by 2030 and 80 percent by 2050.

Alongside the big splashy geothermal developments, a smaller geothermal revolution is quietly gaining steam: neighborhood retrofits on ordinary subdivisions. They go by the name of “clustering model,” “geothermal community,” or (depending on who you talk to) the catchy “geo hood.”

The biggest impediment to geothermal — the reason it only accounts for 1.7 percent of the heating and a/c market, even though it’s not a new technology — is upfront cost.

Incentivizing geothermal varies depending on whether a target area is new construction or retrofit, said Doug Dougherty, CEO of the Geothermal Exchange Organization (GEO). With greenfield developments, there’s only one entity in play: the developer, who can mandate geothermal energy and have the drilling done upfront. Homeowners can lease access to the loop, or lease the loop itself, from the land developer or a utility, creating a steady stream of income. 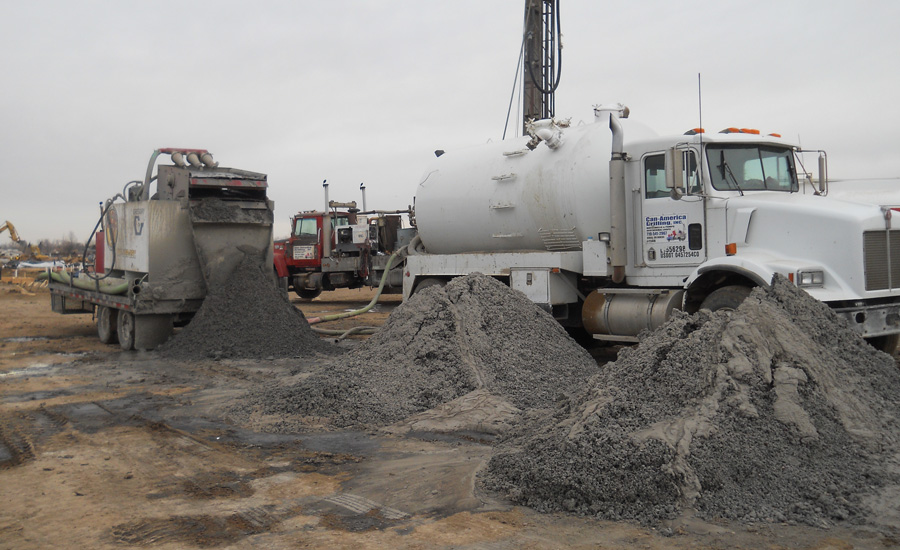 DIG IT: Dirt is excavated to create trenches in preparation of installing the horizontal ground loops in a geothermal system.

At Serenbe (near Atlanta), Norton Commons (northeast Louisville, Kentucky), and Pinewood Forest (Fayetteville, Georgia), wells are drilled individually as construction progresses. Whisper Valley in Austin, Texas, planned for 7,000-plus homes, has a “geo grid” — a main loop that branches off to homes, similar to water/sewer infrastructure — that’s installed prior to home construction, creating economies of scale through load sharing.

“People are reporting utility bills that are sometimes $5 a month, and that’s in Austin, where in the summertime, it’s 100°F,” he said.

“The large-scale guys have it figured out; now, it’s the trickle-down,” Dougherty said. “We’re trying to convince small subdivision developers to say ‘Hey, we’ve got 30 homes, let’s put a common loop in ... tie it in and own the loop.’”

On the retrofit side, Dougherty thinks the push will come from the utilities, as opposed to homeowners.

Con Edison, an electric and gas supplier in New York, is one of the utilities on the forefront of this change. Recently, Con Edison announced that it’s no longer extending distribution gas pipelines into certain rural areas. 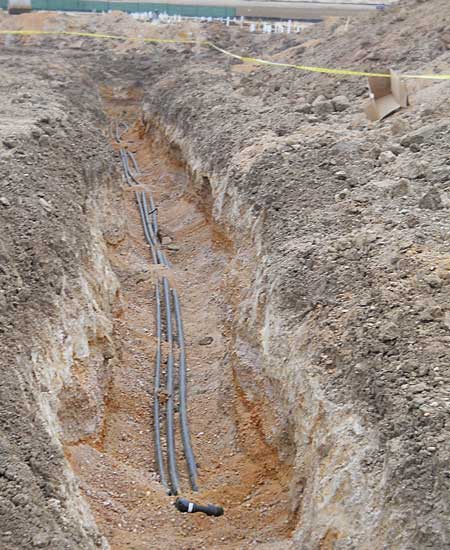 “This proposal will test whether ‘clustering’ the construction of geothermal ground loops in one or more locations, and in some instances installing the ground loop in advance of the customer commitment to adopt geothermal heating, reduces the costs associated with mobilizing the drilling rig or increases the rate of adoption of geothermal heating in the clustered area,” wrote Enver Acevedo, associate counsel for Con Edison, in a request to implement the plan.

The project will be undertaken in a three-year window, from 2019 to 2021, and will focus on 2- to 5-ton systems. The clustering concept hasn’t been tested before in Westchester or, to the best of Con Edison’s knowledge, anywhere in the U.S.

Drilling and installation of the ground loop is the largest cost component of installing a ground-source heat pump. Con Edison hopes the project will show economies of scale.

“The key is, they want to demonstrate the lowering of the cost from the loop perspective,” Dougherty said. “If you think about drilling the loop, [with this project] you have to go another 100 feet to do the job, go another hundred feet ... rather than driving 20 miles to do a job and 40 to another job.”

While Con Edison will encourage Westchester County homeowners to commit to installing geothermal upfront, homeowners don’t actually have to put a heat pump in their house the day the loop is installed. The loop crew takes the pipe as far as the basement wall, and inside work is handled separately if the homeowner decides to take advantage of the new setup and install a heat pump.

“Once that 2-inch pipe intake and outtake are plumbed into your basement, that’s the end of the loop side of things,” Dougherty said. “The contractor that is actually installing the unit does the wiring, modification to thermostats, flushing it, etc.”

Con Edison will own the loop and pay for the installation, and there’s no cost to the homeowner to join the loop.

“And if you want to wait two years for your furnace to die, save up some money for a new unit, you can do that,” Dougherty said.

Another utility offering geothermal retrofits is Corn Belt Energy Corp., an electricity co-op that has a lease loop program called GeoCents. Corn Belt is in central Illinois, where the ground is clay and shale, and easy to drill.

“The average size geothermal heat pump in their area is 4 tons, and they know the average cost for a 4-ton unit is around $4,400 to $4,500 for the loop,” Dougherty said. “Say you’re building a new home and want to put in a geothermal heat pump. You call Corn Belt, they say ‘Great: Put it in, and after it’s operating, we will buy it for $4,400 and lease it back to you.”

The cost of the lease is $7 per ton. That’s $28 per month, and they have a lot of takers, Dougherty said.

“The actual savings from heating, cooling, and hot water far outstrips the cost of that loop — and, they’ve got $4,400 bucks in their pocket. They got their loop installed for free, basically.”

“Utilities are the key to this game, especially if you’re an all-electric utility,” Dougherty said. “We just need more case studies that we can shop around.”

Near Dougherty’s home, an electrical utility just built a new plant because it needed more power at peak capacity.

“They raised their rates to pay for that plant,” Dougherty said. “For the money they spent building that plant, you could have converted 10,000 homes in Springfield, shaved that peak, and wouldn’t have needed the unit. And it’s not a loser for them. It’s a money maker for them.”

“The utilities — the gas and electric — haven’t really gotten behind the model,” he said. “They understand they could be providing geothermal, like gas and electricity. Their concern is the validation of the model, because there has not been a lot of work done [at this point]. But they’re looking at it. Utilities are saying, ‘We’re going to start small with our own facility first, and see how to bring it to other communities.’”

Utilities are being driven in large part by state policy. Andrew Cuomo, governor of New York, has committed the state to meeting the Paris Climate Agreement. Michigan was the latest to join the coalition, called the U.S. Climate Alliance, bringing the total number of participating states and territories up to 19. Some cities, like Austin, have implemented energy codes. Boston has announced that it is shooting for 100 percent renewable energy by 2030.

“Boston sits on a ton of water,” Murray said. “The only thing that’s going to work is geothermal heat pumps, and there’s equipment where you can drill through the basement floor. It’s been done in New York City.”

And in some places, like Westchester County, the infrastructure’s just maxed out.

“In the next five years, you’ll probably see more and more smaller-type geothermal communities — 300, 500 homes — as cities and towns look at it,” Murray said. “The idea of communities owning the loop ... those things are all part of the future of our energy needs.”

Loop field ownership and community geothermal are already prevalent in Europe. It’s similar to district heating, which is popular in the Midwest, particularly St. Paul, Minnesota.

Public demand could hasten the rise of the geo hood, too, Dougherty added.

“I saw a study recently, where after the wildfires in California and the really intense hurricane seasons, people are beginning to recognize that climate change is a real thing.” he said. “A lot of homeowners don’t know how they can get involved; they think it’s out of their hands. I tell people, yes, you are a contributor. You’re part of the problem, and you can be part of the solution.”