Jim Patterson’s business is, in his own words, “super small, super specialized.”

“The interest for me is radiant, air quality … things that are little more technical, that you don’t see a lot of,” he said. “We got started with radiant — we’re big members with the RPA [Radiant Professionals Alliance], won a bunch of awards through them over the years and kind of got into the spotlight with some of our installations. Then came air quality. Once we got into that market, we got in some bigger homes where clients were concerned about air quality and zoning. A client asked about geothermal; we figured it out, and away we went. We kind of developed the company as a niche market.”

That was how Orchard Valley Heating and Cooling got its current focus, back in 2004 when Jim Patterson took over the western Massachusetts-based company, after 10 years of running it with a partner. Now he and his son, Brian Patterson, have embarked on another company that’s even smaller and more specialized. It’s the only one of its kind because the products are their own invention.

Jim Patterson started Orchard Valley back in the mid-1990s. Before that, he was general manager of a division of a big commercial company.

“My kids were getting older, thinking they wanted to get into this business at one point, and there wasn’t really much there that would work for them,” he said. “So I decided to go on my own.” 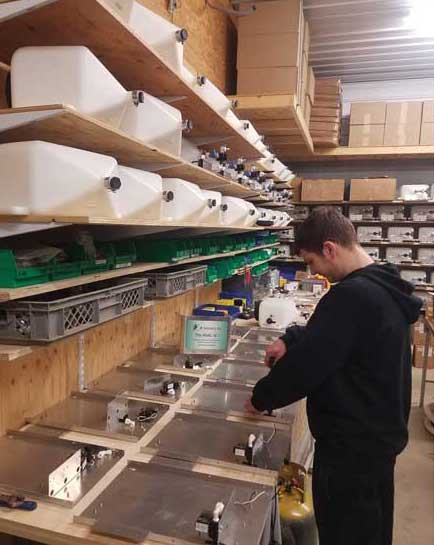 “My goal this year is not to do any [new construction],” Jim Patterson said. “I try to stay away from spec houses. When you’ve got nine people bidding on a house, or 10, they’re not interested in the technology we offer.”

The switch came after advice from a business service group called Contractors 2000.

“Every one of the classes we went to was, ‘If you’re doing new construction, stop tomorrow. Repairs, that’s where the money is,’” Jim Patterson said. “After analyzing, I 100 percent agree. You can’t guess exactly how many hours, how many trips, how many times an architect will make you come back … the man hours. The likelihood of all these callbacks based on materials failing is just so high, even on the best equipment I sell. And I don’t get compensated for that.” 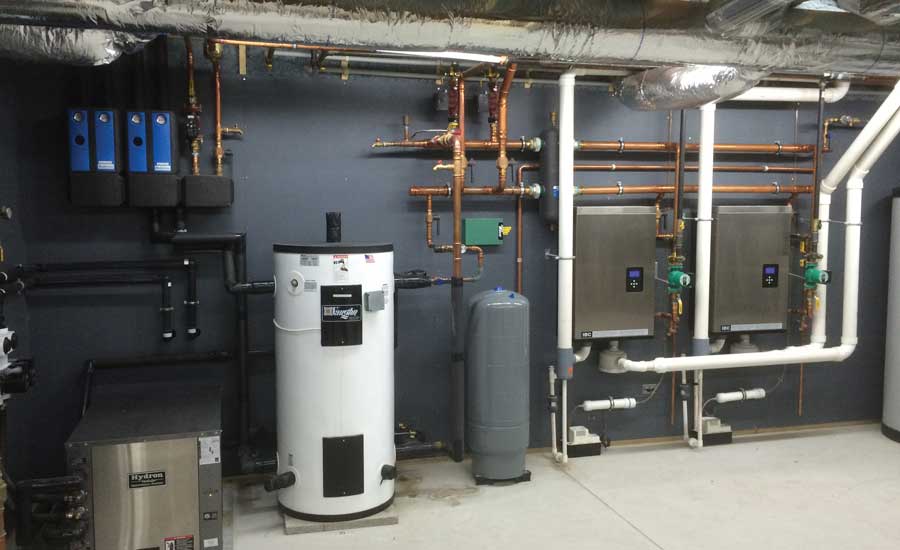 JUST RIGHT: Running a small company allows Jim Patterson to be choosy in what jobs he takes, as does selling to an exclusive market. “We only sell one line, we don’t offer an A,B,C grade of furnace; we focus on the better end of things and get a lot of referrals from how well they work,” he said.

Running a small company allows Jim Patterson to be selective in what jobs he takes, as does selling to an exclusive market. Both pay off, he said.

“We only sell one line, we don’t offer an A,B,C grade of furnace; we focus on the better end of things and get a lot of referrals from how well they work,” Jim Patterson said.

The majority of his work is referral-based.

“It’s an easier close — certainly easier than a cold call,” he said. “They know pricing, and they know how well it worked for their friend.

“I don’t have 15 guys to keep busy,” Patterson added. “It’s been work as many days as you want, even when things are slow.”

Jim Patterson’s son, Brian Patterson, grew up in the business and has worked with his dad for the past eight years.

“I was vacuuming his shop when I was young, as long as I could remember,” Brian Patterson said.

He went on to get his associate’s degree in HVAC technologies at Springfield Tech, and he began working for his dad while he was still in college.

The typical treatment for that problem was a chlorine tablet in the pan. It didn’t last very long, Brian Patterson said, and the chemicals were kind of harsh.

“And they would wash away in a few weeks,” he said. “I had a really hard time acknowledging all the chemicals we waste.

“I started applying my knowledge from service work and realized it was all efficiency based,” Brian Patterson continued. “No one else in the industry had a more efficient way of doing it, or a better chemical … [my dad] said, ‘If you can think of a better way, then do it.’”

A BETTER WAY: Brian Patterson did a lot of service work: changing filters and dealing with the gummy slime that can grow in an air filter and clog the drain, clog the pump, and cause the basement or attic to flood. He invented the HVACIV to keep the slime from growing.

So Brian Patterson came up with a concept. He took it to a couple of local engineers, worked with them to design a control system and a delivery system for a biocide tank, and patented the HVACIV, a device to keep drains clean by dripping biocide into the air handler.

“I had been working on another side thing: recycling water,” Jim Patterson said.

It started with a geothermal project, when he took some measurements of how much water was going down the drain. The system was wasting 16 ounces of water every 60 seconds.

“That was 200 gallons of water in the first day, going down the drain,” Jim Patterson said. “I modified the design to recapture that water, so it doesn’t throw 85 percent of the water down the drain, and that became the Humidicycle, the second product. Now we have the two units that go hand in hand.” 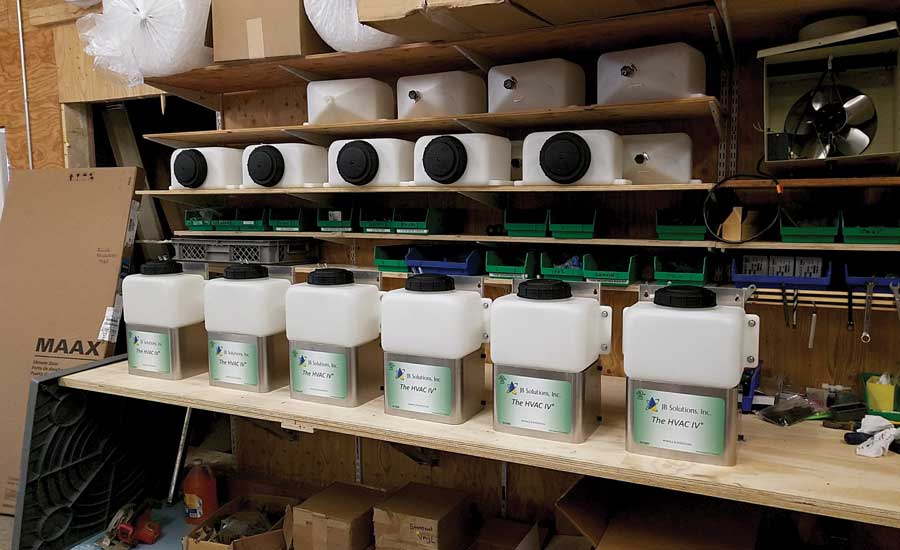 “It was really tough to think about how I could really do that,” Brian Patterson said. “Financially, it was tough in the beginning; it was something I had never done before and my dad had never done before, and we were outsourcing parts. Building the company with my dad brought us together a lot.”

JB Solutions spent time doing some very heavy testing. They metered six systems, tracking 80 percent of the heating season. In that time, for those six homes, 15,400 gallons of water were saved. Next year, close to two dozen Humidicycles will be metered and collecting data.

“The water conservation part, it’s incredible,” Jim Patterson said. “You never thought it was that much water until you measure it. If you could put 100,000 of these across the U.S., how much water you could save?”

The numbers were so promising that the Pattersons decided to try to get bigger companies interested.

“Being a small manufacturer, it’s hard to get into the marketplace,” Jim Patterson said. “Of course, there’s some reservation because no one’s doing it.”

He’s had some interest from a couple of the larger firms; if that doesn’t work out, the team will continue to grow the operation on their own (entering the products into engineering contests, reaching out to other contractors, etc.).

Since the new company launched, Brian Patterson has concentrated his efforts on JB Solutions. He’s also getting into the marijuana business in Massachusetts, where it was recently legalized — a great opportunity for JB Solutions to help growers reclaim water that’s wasted in the growing process.

Meanwhile, Jim Patterson is putting more effort into building Orchard Valley as a specialty contractor, with an emphasis on Eastman boiler repairs — and taking advantage of Orchard Valley’s own client base as potential customers.

“I’m always turning down folks from Eastman, so I decided to do them, and I got 15 calls a month,” he said. “I’ve got a really, really loyal client base. They always ask how things are going with JB Solutions; they say ‘You can’t give up Orchard Valley!’”

“I enjoy the technical part of it, the challenge: people bringing you in because they can’t fix the problem, being the one to investigate what the problem is, the satisfaction of being able to fix something someone couldn’t fix,” he said. “I enjoy working for myself, the freedom of not being tied to a desk 24/7. I’m on the road.”

For his part, Brian Patterson looks forward to the potential his inventions have to do good in the world.

“In the next five years, I’m hoping it’s kind of mandated that we have this technology everywhere,” he said. “We want people to save water. Like Flint: It’s something we take for granted over here.”

He aspires to creating a fund where some of the proceeds from selling the units go to countries that don’t have enough water.

“The most exciting part about this whole thing was seeing that it worked,” Brian Patterson said — “knowing that I could help people.”