Mike Crawford, formerly a senior executive from Four Seasons Hotel and Resorts Co. and Walt Disney Co., has been named the new CEO for Johnson Controls Hall of Fame Village.

He will lead the long-term development of the $889 million mixed-use project underway around the campus of the Pro Football Hall of Fame in Canton, Ohio. The once-in-a-lifetime project is being led by a partnership between the Pro Football Hall of Fame, Industrial Realty Group (IRG), and M. Klein & Co. This project began just over two years ago, in the final quarter of 2016. Michael Eck served as interim CEO on behalf of the stakeholders and M. Klein & Co. during the foundational building period. The long-term partnership between Johnson Controls and the Hall of Fame Village is a $100 million-plus agreement to create the first-ever sports and entertainment smart city. The completion of the Johnson Controls Hall of Fame Village coincides with the National Football League’s 100th season in 2019 and the Centennial Celebration on Sept. 17, 2020.

“I am very excited that we have a tremendously talented and enormously experienced executive like Mike Crawford to quarterback the Johnson Controls Hall of Fame Village team,” said David Baker, Pro Football Hall of Fame president and CEO. “He has a long track record of starting, leading, and rebuilding organizations and is noted for his expertise in strategic planning, new business development, operation management, and proven negotiation skills. He will make Johnson Controls Hall of Fame Village a world-class and state-of-the-art destination center.” 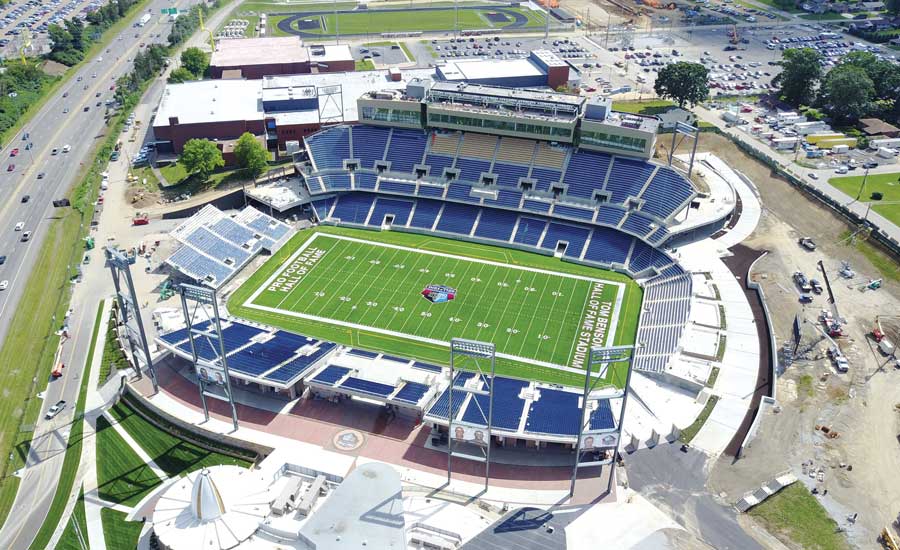 MAKING PROGRESS: Progress on the project includes approximately $250 million of construction that has resulted in the Tom Benson Hall of Fame Stadium.

Progress on the project includes approximately $250 million of construction that has resulted in the Tom Benson Hall of Fame Stadium, which was designed both as a sports stadium and a concert venue.

“We began by listening to the outcomes the Hall of Fame desired — an enhanced fan experience, an optimized and energy-efficient building, low impact on the environment, and the capability of creating new revenue-generating opportunities,” said Fraser Engerman, director of Media Relations, Johnson Controls. “The stadium was designed with those outcomes in mind and with foundational, future-ready technologies that will provide an enhanced fan experience everywhere in the Johnson Controls Hall of Fame Village.” 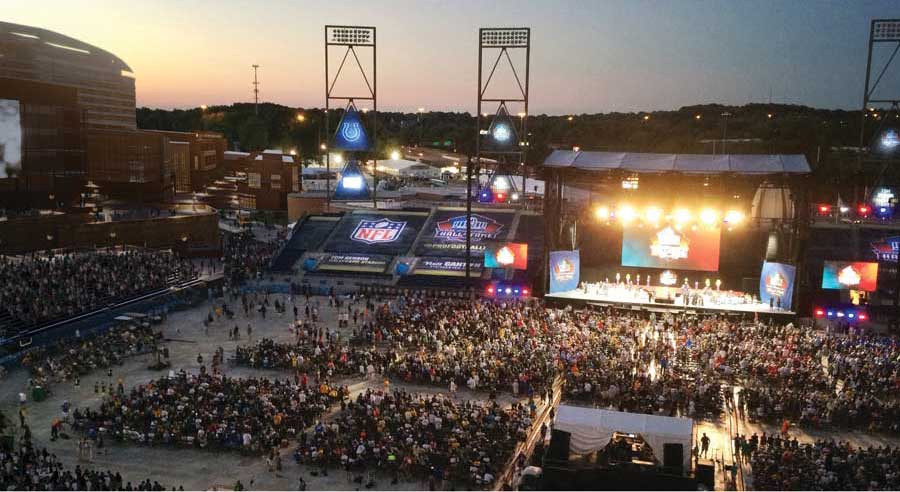 SPORTS AND ENTERTAINMENT: Designed both as a sports stadium and a concert venue, the Tom Benson Hall of Fame Stadium holds 23,000 people.

According to him, the company took the project on in an effort to demonstrate its technology solutions for making cities smarter, safer, more secure, and more comfortable in a real-world setting.

“This venue provides us with a working showcase and lab,” said Engerman. “The solutions we provide at the Johnson Controls Hall of Fame Village are exactly like those that are helping customers from Canton, Ohio, to cities around the world.”

There are 10 components in the Smart City (see sidebar), and Johnson Controls is providing the building management systems, HVAC equipment, fire and security systems, and other technologies. According to the company, the result will be significant greenhouse gas emissions reductions and energy efficiency improvements.

“More than 2,000 football fields (213,333 yards) of fiber optic and copper cabling have been installed for current and future connectivity for smart systems and technologies deployed throughout the project,” said Engerman. “This is roughly 10 to 15 percent of the total cabling that will be laid for the entire Johnson Controls Hall of Fame Village.”

The features of this technology are as follows.

While constructing the plans for this Smart City, Johnson controls engaged in early collaboration between the owner and the design and constructions teams. Each shared information based on data and made decisions in regard to the findings. 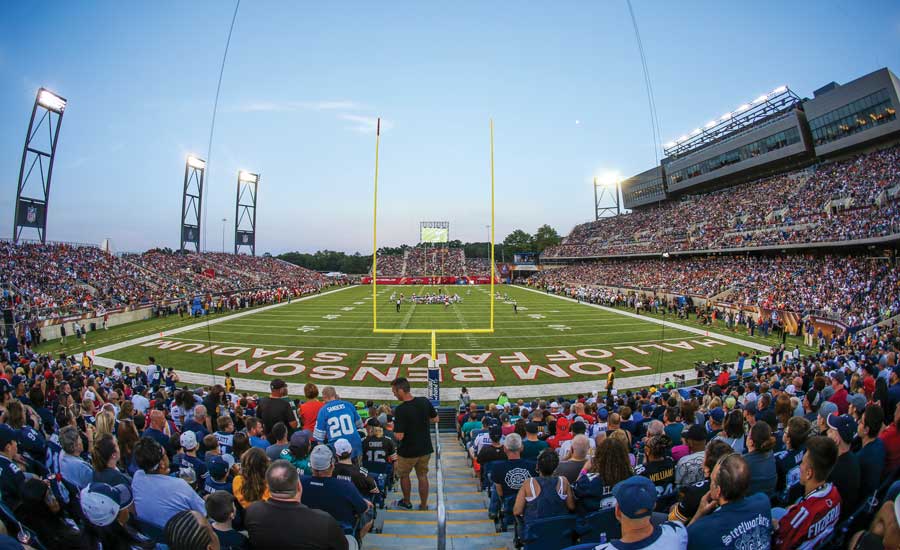 COMPLETION CELEBRATION: The completion of Johnson Controls Hall of Fame Village will coincide with the National Football League’s 100th season in 2019 and the Centennial Celebration on September 17, 2020.

“With deliberate expert attention applied early during the planning phase, pitfalls can be avoided, and the buildings can be designed, delivered, and maintained in a way that achieves the owner’s defined outcome well into the future,” said Engerman. “In this case, Johnson Controls was selected as a single point of responsibility for technologies early in the process. Having someone who can provide critical continuity throughout pre-construction, implementation, installation, and service ensures buildings have the necessary equipment and systems uptime and reliability so that the systems live up to their full potential and support any future innovations while protecting the existing investment.”

To manage the buildings, there will be planned maintenance schedules, and the company will use predictive and diagnostic monitoring. This will allow Johnson Controls to leverage building data to make recommendations for performance improvement.

“We always get excited about the opportunity to deliver outcomes in buildings through technology integration,” said Engerman. “The digitization of our world — both personal and business — is picking up speed, transforming and challenging the construction industry to look beyond the physical infrastructure of a building and instead, look at the purpose and vision for the building in order to drive better outcomes. Just as you build a physical infrastructure to accommodate a future workforce, it’s also essential to install the intelligent infrastructure and bandwidth that will handle future innovation. Not to mention the evolving demands and expectations of a technology savvy staff.”

10 Components to the Smart City

Johnson Controls Hall of Fame Village is comprised of 10 major components that will be integrated through technology to subtlety and seamlessly share the values from the game — commitment, integrity, courage, respect, and excellence — with guests in a way that will impact their lives.