Like most entrepreneurs, Dion Quinn’s dreams of owning his own business started as little more than a hope and a dream.

In the summer of 1985, from a garage in Anaheim, California, Dion Quinn drafted the budgets for his first company using an Apple II computer.

“At AC Pro, we’re working to create a company where everyone can succeed together,” said Dion Quinn, president, AC Pro. “We’re not just selling HVAC equipment and supplies, we’re building a partnership to develop our team members and help our customers succeed.”

Dion Quinn never wanted to work for anyone other than himself. That was his goal for as long as he can remember.

“Since I was 18 years old, I’ve always wanted to go into business for myself,” Dion Quinn said. “Starting a business was my focus when I got my first full-time job out of high school.” 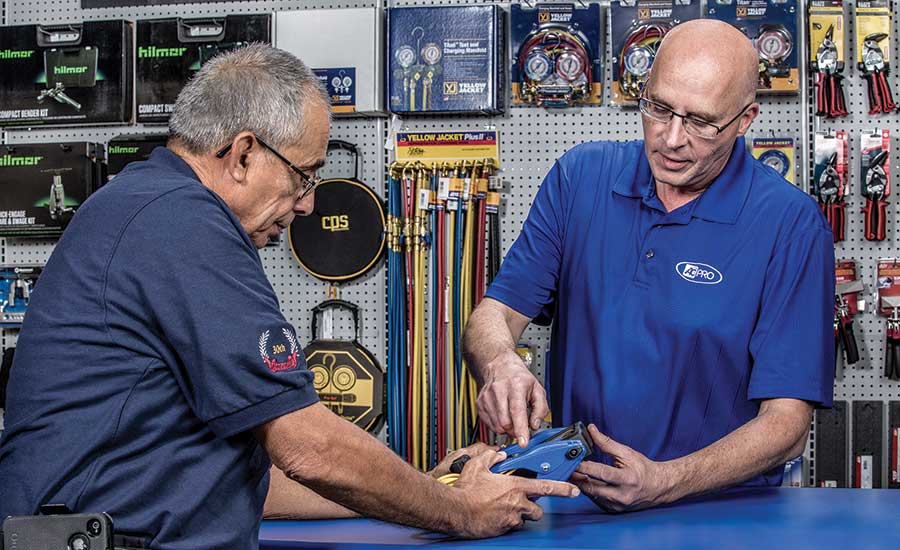 In 1984, he met his wife, Petra. They married the next year. Very soon thereafter, the pair founded Mechanical Systems Insulation, a mechanical insulation contracting company. With a borrowed Datsun truck, the Quinns humbly ran the business out of a small garage. A year later, the company expanded its offerings and began offering duct insulations in large commercial/industrial applications.

Never one to keep the entrepreneurial genie bottled up for too long, Dion Quinn — along with his friend Bob Billiu — elected to start another company, Material Supply Inc., a heating and cooling supply company, in 1986. While both of Dion Quinn’s companies shared the same acronym, they were very different — one delivered services, and the other distributed supplies.

Through contracting and material sales, the entrepreneurs continued to gain industry knowledge and establish their businesses’ identities.

“My experience being a contractor for the first four years, working out in the field myself, helped us understand the needs of our customers,” Dion Quinn said. “We continually strived to make it easy to do business with us then, and that remains true today.”

By 1989, the Quinns decided to leave contracting behind and focused on their growing supply business. Soon after, they began fabricating sheet metal products, which paved the way for more growth.

The following decade spurred exponential expansion as new locations opened throughout Southern California and Nevada. Today, the company has a collective 250,000 square feet of manufacturing and warehousing space across both states.

“We’ve come a long way since our contracting days, and we’ve learned a lot over the years,” Dion Quinn said.

Dion and Petra Quinn’s son Blake Quinn grew up in the family business. In fact, AC Pro was the first place he visited upon leaving the hospital when he was born.

“My mom was the only one who processed payroll back then,” Blake Quinn said. “My parents had to make a stop at the office on the way home from the hospital.” 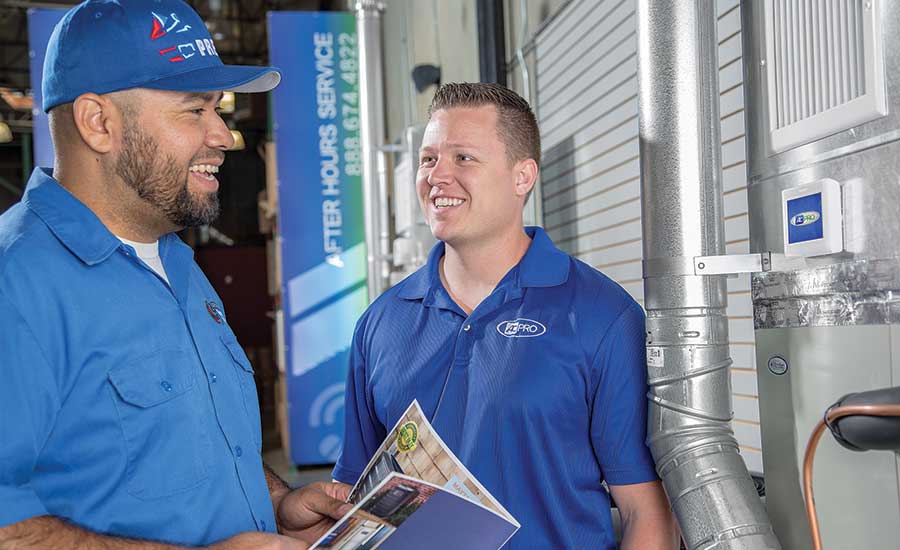 During summer or winter breaks from his studies at Biola University, Blake Quinn found himself doing anything from janitorial work to stuffing envelopes to working in the plant to sitting in on dealer meetings at AC Pro.

Sensing the shift in the digital marketplace, Blake Quinn embraced his e-commerce title and began brainstorming what an AC Pro online storefront could potentially look like.

“We had never attempted anything like this before,” he said. “It ended up being so much more complex than I could have ever imagined.”

During the project’s infancy, Blake Quinn and his marketing/e-commerce team approached multiple platforms and agencies. While each had a lot to offer, none effectively checked all of the boxes the company desired. So, the team pondered the possibility of customizing an off-the-shelf solution. And that’s what they did.

After three years of trial and error, hundreds of product photo shoots, and the entry of thousands of product attributes, AC Pro debuted its online storefront in June 2016.

“Ultimately, we recognize that HVAC sales are going to occur online. This is something customers are going to use regardless whether we have a storefront or not. They’re either going to purchase from us or our competitors.”
- Blake Quinn, vice president, AC Pro

Customers shopping on AC Pro’s online storefront are able to search inventory across any of the company’s 17 branches and look up accurate, real-time pricing. All equipment is accompanied by photographs, which can be viewed in 360-degree angles. In-house templating allows contractors to match units to the components they’ll need for a comprehensive install or repair.

“We offer a complete system matchup,” said Blake Quinn. “For example, we help contractors match their horizontal, vertical, or plenum coils with specific condensers across multiple efficiency levels. We’ll offer a full system price and everything can be added to a shopper’s cart in one click. While this may take 45 minutes on other sites, it can all be completed in less than two minutes on our site. And, many of the smaller items available on our site can be delivered the next day.”

While the website is only two years old, it could be viewed as a mature platform in the HVACR distribution industry, which is largely still developing its digital storefronts.

“We have several patents; there’s a lot of proprietary things on the site,” Blake Quinn said. “We’ve written our own code, and our site is learning and getting smarter all the time. Our customers seem to really like it, as more and more of our orders are being done online every day.

“Ultimately, we recognize that HVAC sales are going to occur online,” Blake Quinn continued. “This is something customers are going to use regardless whether we have a storefront or not. They’re either going to purchase from us or our competitors. Manufacturers are filling orders directly through the Amazons of the world. We’re extremely proud of what we’ve been able to create in-house with our own team.”

In 2002, The Quinn’s started God’s Kids, a nonprofit organization that supports orphanages and feeding centers worldwide. More than 600 children in five countries are currently under the care of orphanages supported by God’s Kids. Children receive meals, shelter, clothing, medical attention, educational support, and other human necessities to help them live purposeful and hopeful lives. 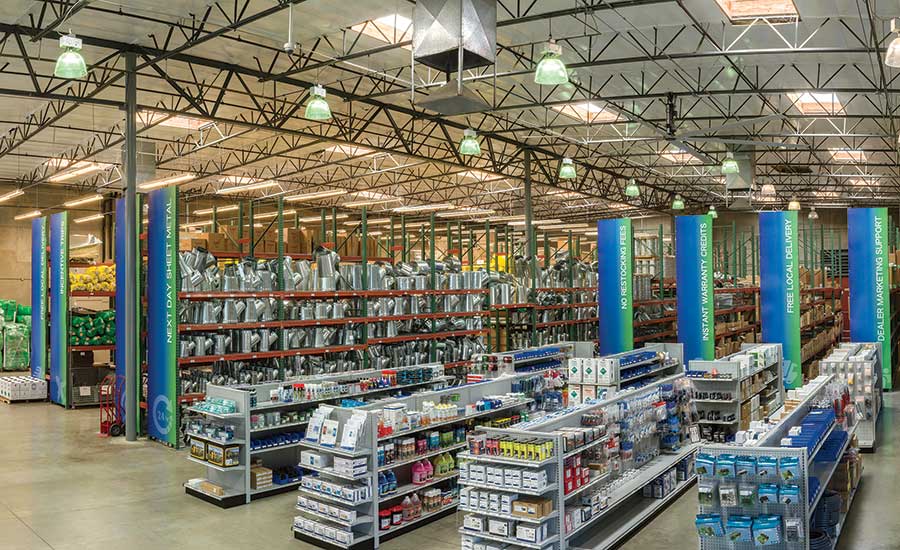 “God’s Kids has set the bar for international orphanages by instituting standards of care,” said Dion Quinn. “When an orphanage enters into the God’s Kids’ network, the organization provides financial, strategic, and instructional support to these homes for their children.”

AC Pro’s exceptional efforts have garnered the attention of many. The company earned the Maytag Sales Performance Award in 2016, Affiliated Distributors HVAC Member of the Year Award in 2015, and the 2015 Emerson White-Rodgers Exceptional Sales Performance Honor in 2015, to name a few. The company’s exceptional growth also earned it a spot in the Inc. 5000 list of America’s fastest growing private companies in 2015.

“When associates go on vacation, we have their email and ERP software shut down,” said Blake Quinn. “We don’t want them checking emails when they should be enjoying family time.”

This family atmosphere extends throughout the arteries of each branch and is evident in the testimonials provided by many of the company’s employees.

“Personally, I believe this is the best place to work,” said Denise Endicott, director of accounting, who joined the company in 2003. “We are one big happy family, and just like a family, we support one another and encourage and stand beside each other in the good times and bad.”

Pat Hutchinson, director of purchasing, AC Pro Nevada, joined the company in 1994. She deems working for AC Pro a blessing.

“I have been here 22 years, and every day I thank God that I work for this company,” she said. “The owners treat their associates, customers, and vendors with respect. They value each and every one of us. I love AC Pro and everything it stands for. If every company was like this AC Pro, the world would be a much better place.”