The EPA’s Call for Comments Stirs Up the HVACR Industry

The public comment period has closed for the Environmental Protection Agency’s (EPA’s) proposed changes to Section 608 of the Clean Air Act (CAA), and now, the industry waits to see what happens next. The primary question being asked in the proposed rule, Protection of Stratospheric Ozone: Revisions to the Refrigerant Management Program’s Extension to Substitutes, is whether or not the EPA has the authority to regulate anything beyond ozone-depleting substances (ODS). Inspired by feedback from parties in the regulated community, as well as lawsuits filed to question the agency’s statutory authority, former EPA Administrator Scott Pruitt signed a letter on Aug. 10, 2017, explaining that the agency was planning to issue a proposed rule, looking at pieces of the Nov. 18, 2016, rule’s extension of the 40 CFR part 82 subpart F refrigerant management requirement to nonexempt substitutes.

“The EPA is now proposing to withdraw the recent extension of the appliance maintenance and leak repair provisions at 40 CFR 82.157 to appliances using only nonexempt substitute refrigerants,” according to the proposed rule. “This proposal would relieve businesses from having to conduct leak inspections, repair leaks, and keep records for appliances containing 50 or more pounds of nonexempt substitute refrigerant.”

In light of this proposal, the EPA decided to take comment, asking the industries affected and any others wanting to comment on the possibility of fully rescinding subpart F provisions to nonexempt substitute refrigerants.

The 45-day comment period that the EPA called for on subpart F has caused considerable reaction from different members of the HVACR industry. Confusion, panic, even outrage has been expressed in blogs, e-newsletters, and some of the almost 200 comments on the EPA’s website. The concern about completely rescinding subpart F seems to boil down to four major issues: licensing, safety, effects on industry businesses, and the environment.

According to Howard Weiss, executive vice president of The Esco Group and a vocal opponent of these changes, there is a sales restriction placed in subpart F. This piece requires licensing and doesn’t allow unlicensed sources to purchase or sell just any amount of any type of refrigerant.

One of the public commenters on the EPA site was Joshua Thompson, who is currently an HVACR instructor at Washburn Tech in Topeka, Kansas, as well as a technician working in the field. He was concerned about the danger that selling to unlicensed individuals could cause.

“If we are going to put refrigerant purchase in the hands of the homeowners and people who are not professionally working with this equipment and materials, we are placing people in danger,” he said. “We will see injuries increase and higher costs to homeowners. I deal with teaching students every week who are learning how to safely handle this material. With pressurized vessels and equipment that can seriously injure people, we are leading our neighbors down a bad path by allowing this change.”

BUSINESS NOT AS USUAL

It’s not just the instructors and contractors that are concerned about the removal of subpart F. Commonly discussed in three main parts, the HVACR industry supply chain in its simplest terms consists of manufacturers, distributors, and contractors. 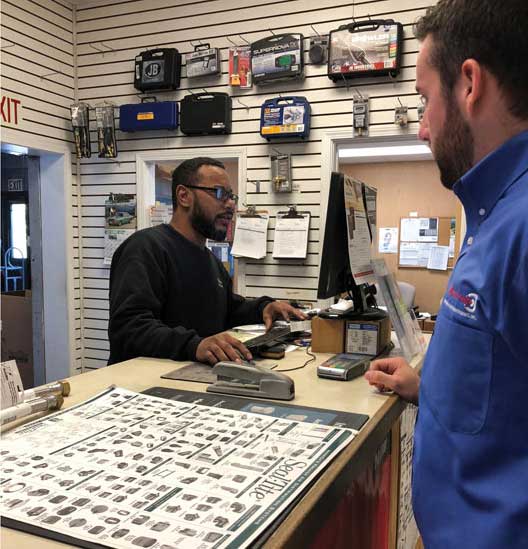 BUSINESS NOT AS USUAL: Distributors have already felt the struggle of increased competition as big-box retailers have increased their sales of HVACR accessories and parts. Further opening the marketplace could likely increase this issue for distributors.

“The industry has absorbed many economic burdens since the adoption of the Montreal Protocol, and levying an additional economic burden should be carefully considered before ‘changing the rules’ once again,” he said.

As for the manufacturing piece of the equation, one of the larger concerns is warranty costs and claims. Equipment manufacturers provide instructions and specifications of how the HVACR equipment they sell should be installed and maintained.

Buzz Vontesmar, owner of American Home Heating & Air Conditioning, Paducah, Kentucky, is already seeing an issue with warranty claims in his area because of an HVAC sell-to-the-public business that sells package units, split systems, and mini splits to the customer directly.

“These DIYers, in general, do a very poor job, and in my experience, manufacturers often refuse any warranty work on these units,” said Vontesmar. “The homeowner then tries to bring these problems back to where they purchased the systems, and they do not provide any warranty on this equipment. It is left up to us contractors to clean up the mess left behind by this practice.”

He went on to further explain that this scenario is not good for anyone involved.

Distributors have already felt the struggle of increased competition as big-box retailers have increased their sales of HVACR accessories and parts. Further opening the marketplace could likely increase this issue for distributors.

“The special relationship between contractors and distributors could easily become a thing of the past if this new regulation becomes permanent,” commented Thomasena Philen, former HVACR technician and current owner of Vocademics Solutions, Dallas. “Manufacturers may benefit from sales at big-box stores, but the cost associated with higher warranty volume and customer safety and satisfaction will outweigh the short-term benefits.”

The nonexempt substitutes the EPA commonly refers to as examples are HFCs and HFOs. Although not classified as ozone-depleting substances, these substitute refrigerants are chemicals, and they have environmental effects. The comments on this subject were vast, and many were about global warming and the environment.

Having followed all the procedures and regulations of the Montreal Protocol since 1995, Tom Mich Sr., assistant manager of R.E. Michel Co., Phoenix, is concerned that despite legislation, contractors aren’t following venting and recovery rules, and he worries that further deregulation will do nothing positive for the environment.

“I have also seen no enforcement on leak repairs for the provision you are looking at gutting for substitute refrigerants to save $43 million a year,” he commented. “The amount of CFCs still being released is staggering and saddening. I have always been a small government, low tax person, but when it comes to this, I don’t want to tell my grandchildren we saved a few hundred million dollars and it sped up global warming and increased the size of the hole in the ozone. To add injury to insult, allowing untrained people to purchase refrigerants and then bypass trained contractors to add to or charge repaired equipment will just make more obvious problems. Please keep this regulation as read and start enforcing other existing laws pertaining to the subject.”

There are a list of reasons and comments that support keeping subpart F, as it is believed by many to benefit the overall HVACR industry. Despite this, one bold dissenter made the below comment, which stood out among the others.

Don’t do anything. I see many comments about:

Frankly, none of these concerns should be considered with the rules with respect to HFCs. HFCs have zero ozone-depleting potential, which is what the EPA has been tasked to reduce via refrigerant restrictions.

EPA rules should have no concern about ensuring the HVAC technicians a larger market, as many competent personnel are fully capable of HVAC maintenance and diagnostics. A quick search shows many cases of licensed HVAC technicians performing faulty work and having incorrect diagnosis. Poorly done DIY maintenance will have the eventual result of increasing work for the concerned technicians. Perhaps they may then learn they should not do the work.

Multiple consumer protection groups have set up stings and found some (certainly not all) to have, at best, poor diagnostics or simply do work to increase the customers’ bill.

Perhaps the EPA should guarantee my profession that no outsiders can easily enter it on the side.

If the EPA is to take the position that someone may hurt themselves or waste money, they should consider deeming themselves to have the authority to limit the sale of all tools possibly used for automotive use to licensed mechanics. Surely a poorly done brake job creates a much more immediate hazard than a person intentionally or unintentionally venting 5 pounds of HFC gasses. Yes, someone incompetent should not work on high pressure systems, but it is not the government’s job to ensure people keep within their limits. Unnecessary tool sales to incompetent people will increase the country’s GDP.

HFC gasses are presently sold in aerosol duster with the 100 percent intended use of being let out of the container when used. What authority does the EPA have to restrict sales to those in the licensed club for one use but not all other industrial, personal, or commercial uses?

The way the EPA has written rules under previous administrations, it would probably attempt to regulate, capture, and recycle nitrogen if it was used as a refrigerant. It should be noted that other than the ODP problems of CFC and HCFCs, the country got by for many decades without the EPA getting into those. ODP is gone with HFCs.

Minimize government, government rules, and government regulations. Determine the minimum the agency can do for the country and do its job rather than expanding its role.