KEYWORDS Tech of the Month / technicians
Order Reprints
No Comments

Why He’s Tech of the Month: Shane Stepps grew up in the building and construction trades; his adoptive father owned a construction company in Oklahoma City for 30-plus years.

“When I was a freshman in high school, he told me that he wanted me to go to vo-tech, and if I wanted to go to college, he would pay for that too,” Stepps said. “He said he would send me for plumber, electrician, or heating and air guy.”

At the time, the teen assumed plumbing meant cleaning up poop, and electricians ran the risk of getting shocked to death, so he chose heating and cooling.

Stepps graduated high school a year early, went to Southern Tech in Ardmore, Oklahoma, and did an on-the-job training program at a classmate’s family’s heating/air/electrical business, working in new construction. After getting his journeyman’s license, he decided to do more service work. 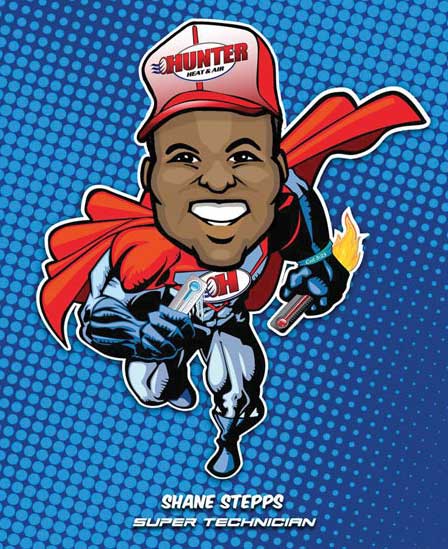 “I did my research and came to Hunter Heating and Air because it was the biggest growing company in my area and always had high reviews,” he said.

He turned in his application on a Friday afternoon, got a call Monday morning, interviewed that week, and was hired in March of 2017. He works as a service tech and helps out as a lead installer.

Stepps is on the younger side of the workforce: He just turned 22.

“It’s great to see a young person so dedicated to the trade and serving well; he’s always learning and striving to do better,” said Chris Hunter, company president. “Shane is one of those guys who always has the best attitude! You can’t help but smile when you are around him. He’s very well-spoken and consistently gets raving reviews from customers.”

When there’s extra work to be done, Stepps is the first to step up.

He volunteers to work the holidays because most of his fellow techs have kids and he is just now starting his family. And he always goes the extra mile for customers.

“Just the other day, we had an elderly lady let us know that Shane was so handsome and friendly, plus he even carried in her groceries for her while on a service call,” Hunter said.

That kind of interaction is what Stepps likes best about the job.

“I guess it’s gotta be figuring out problems and helping people,” he said. “It’s that feeling of accomplishment of fixing that issue someone’s having a problem with and seeing people smile when you’ve fixed their cool air on a 100° day.”

Stepps works hard and plans to keep working hard; he’s going for his plumbing journeyman in February. And his effort does not go unnoticed.

“My boss, my co-workers couldn’t be nicer,” he said. “If they feel like you did something that made them happy, they’ll let you know. They always give credit where credit is due.”

“Shane has worked extremely hard and has been able to buy his first home, buy an engagement ring, and marry the love of his life, and he is only 22 years old,” Hunter said. “What a start this HVAC career has provided him! His future is bright, and he will do well to represent not only the Hunter Super Techs, but also this industry as a whole.”

To nominate an HVACR technician for Tech of the Month, click here or email mariataylor@achrnews.com.