This website requires certain cookies to work and uses other cookies to help you have the best experience. By visiting this website, certain cookies have already been set, which you may delete and block. By closing this message or continuing to use our site, you agree to the use of cookies. Visit our updated privacy and cookie policy to learn more.
Home » Retroactive Tax Credits for Geothermal and a Promising Future
HVAC Residential MarketHVAC Commercial MarketResidential Geothermal Heat Pumps

Retroactive Tax Credits for Geothermal and a Promising Future

After the geothermal tax credits expired at the end of 2016, HVAC contractors who specialized in ground source installations struggled to replace a portion of that work with other services.

Diversified companies had the advantage. Managers of these firms found that, in addition to a broad variety of technologies and services, they could continue to install geo systems — though fewer of them — to home or business owners sold on the technology. Of course, replacement work helped.

The baffling element of the Omnibus spending bill passed by Congress in December 2015 was the lawmakers’ decision to extend residential and commercial tax credits for solar photovoltaics and big wind through 2021, while allowing similar incentives for ground source heat pumps and other “orphaned” technologies to die on the vine. 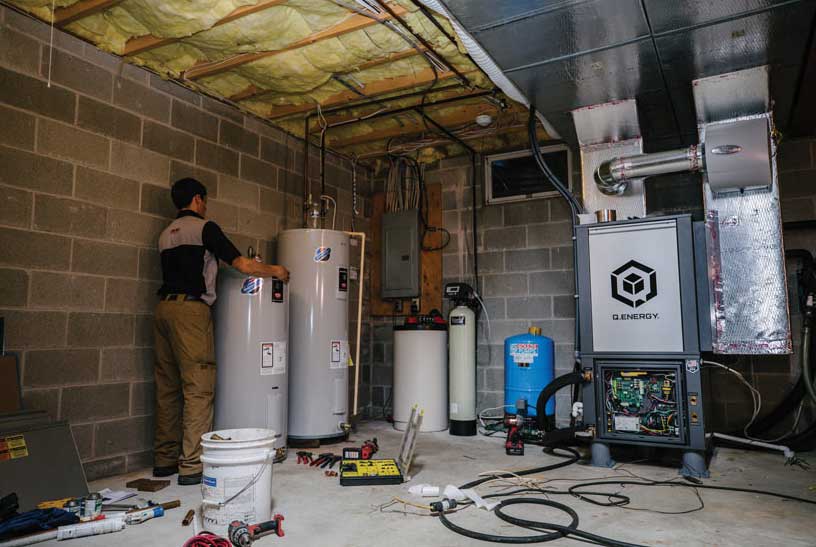 “In 2014 and ’15, geothermal accounted for 45 percent of our work,” said Vince Youndt, owner of Vertex Mechanical in Stevens, Pennsylvania, who installed his first geothermal system in 1986. “In 2017, that fell to 10 percent, largely because of the tax credit elimination, but also due to a fall in fossil fuel prices. The value was still there, but homeowners saw a longer ROI [return on investment]. Most of the geo work we’ve done over the past year has been retrofits to 20- or 30-year-old houses with geo systems already in place.”

While amply diversified, Vertex has carved a niche in the local market as a geothermal leader. The 20-employee, full-service plumbing and mechanical/HVAC contracting firm honed its teeth on ground source technology when it was founded in 2002.

“Right out of the gate, I dove into all sorts of renewable technology: wind, solar thermal, and solar PV,” said Youndt. “Geothermal quickly rose to the top as the most viable, especially in the U.S. market, where large homes and affordable energy are prevalent. We install all green technologies, but geo became a mainstay.”

Like many contractors around the country, Vertex managers and installers alike are excited that tax credits have been reinstated. And due to the advancement of geo technology, they’re now able to offer customers more value than ever.

On Feb. 9, Congress passed its budget bill, which included an amendment that reinstates and extends the federal tax credits for residential and commercial installations of ground source heat pumps through the end of 2021.

Winning back the tax credits was due largely to the tireless efforts of the Geothermal Exchange Organization (GEO) and several allied organizations.

“News of the tax incentives went out in our company newsletter,” said Youndt. “But I personally called customers who had a geo system installed while the incentives weren’t available. You can imagine the reaction, especially considering the news came in plenty of time to claim the savings before filing 2017 taxes.”

Many of those phone calls went to homeowners who had no choice but to replace aging heat pumps.

“A lot has changed in the two or more decades since ground source heat pumps became so popular,” Youndt said. “There have even been advancements in heat pump technology since the credits expired. One of the last retrofits we did in 2017 is a great example.” 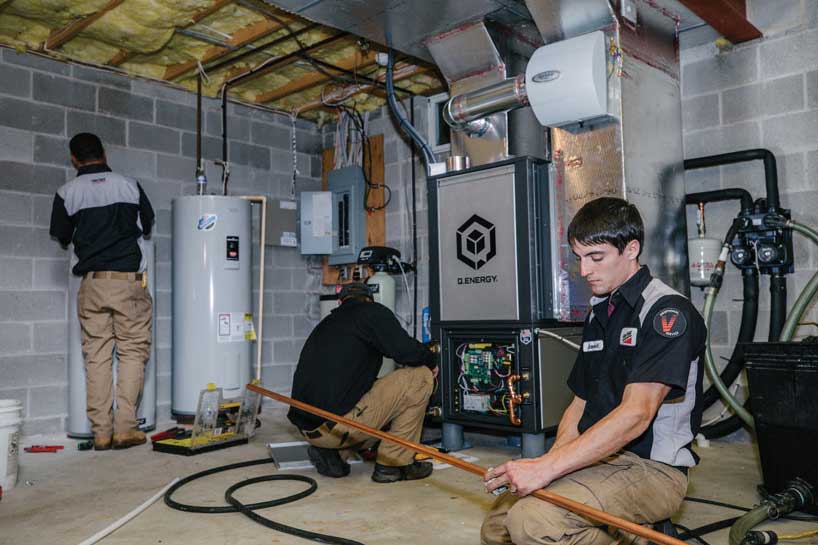 GIT ’ER DONE: A three-man Vertex Mechanical crew completed all the work at the home in a single day.

“This was our first time installing a Q Energy heat pump, and we noticed a number of differences right off the bat,” said Glen Kitch, lead technician. “The frame and doors are made of heavy-gauge aluminum, and access is easy because all the major components, such as controls and TXVs [thermostatic expansion valves], are right up front.”

The unit has removable cabinet panels on all sides, and the backup heat strip comes installed. To reduce pumping head, there are no fittings on the internal water circuit. A plenum is installed within the cabinet on top of the blower, which is especially useful when mechanical overhead space is at a premium.

By including the plenum inside the cabinet, laminar airflow is achieved without requiring a straight duct run before entering the home’s main branch duct.

“It’s an exceptionally well-designed unit,” said Youndt. “With the tax credits now back in play, along with the 10-year parts and labor warranty that Q Energy provides, we’ll be installing more of these units in years to come.”

THE DEVIL’S IN THE DETAILS

Some geothermal contractors don’t take into account the impact that pumping head has on the actual operating efficiency of geothermal systems. When Youndt first visited the home, he noticed that the pipe in the two-hole exchange field was properly sized, but the diameter was reduced after entering the building. The result was higher head pressure on the pumps and less net Btu extraction from the field. Vertex removed the undersized fittings and increased the size to maximize pump potential, reducing head. The larger fittings provide better results, both in regard to pumping energy and energy transfer. It’s details like this that Youndt, in part, attributes to the company’s success. That attention to detail also extends to the way Vertex provides domestic hot water (DHW) in conjunction with geothermal heat pumps.

“More often than not, when a desuperheater is used, the geo unit is connected directly to a single water heater, pulling water from it and dumping back into it,” said Kitch. 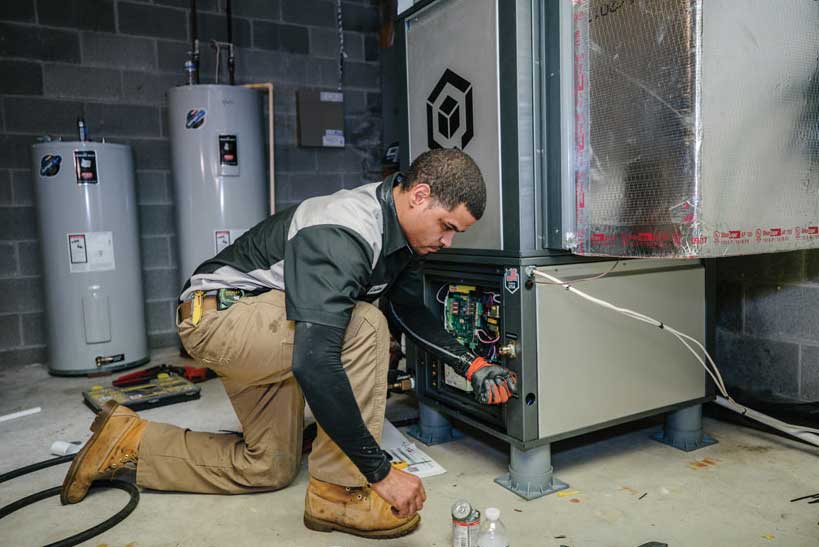 COMING TOGETHER: Support installer Lester Gomez begins piping the desuperheater out of the Q Energy unit.

“That’s not the case with the units we install because the advantage to the owner is minimal compared to a ‘twin tank’ or ‘buffer tank’ setup,” he added.

Vertex pipes the incoming well or city water into a buffer tank, which is often just an electric water heater with the heating element disconnected. This tank is then connected to the geothermal unit’s desuperheater via the drain fitting, preheating the tank to between 90° and 140°F, depending on conditions. Water then flows from this first tank into a second water heater with an active heating element.

“A number of heat pump manufacturers recommend the twin-tank configuration,” said Kitch. “It works very well, though I’ve rarely seen anyone else use it quite the way we do.”

In this case, the buffer tank is a 40-gallon Bradford White water heater, and the primary tank is a 50-gallon model. Sometimes, when the DHW demand is very high, a second buffer tank is used.

“Bradford White is our water heater of choice,” said Youndt. “We’ve found them to be very reliable, and they offer a broad selection for different applications. We paired two electric water heaters on this job, but the buffer tank can really be any insulated, ANSI-certified vessel with three fittings, and the water heater can be of any configuration or fuel source.”

“Helping customers who purchased new geothermal systems without tax credits over the past year-and-a-half has been rewarding, but the new legislation is now a win-win for everyone,” said Youndt. 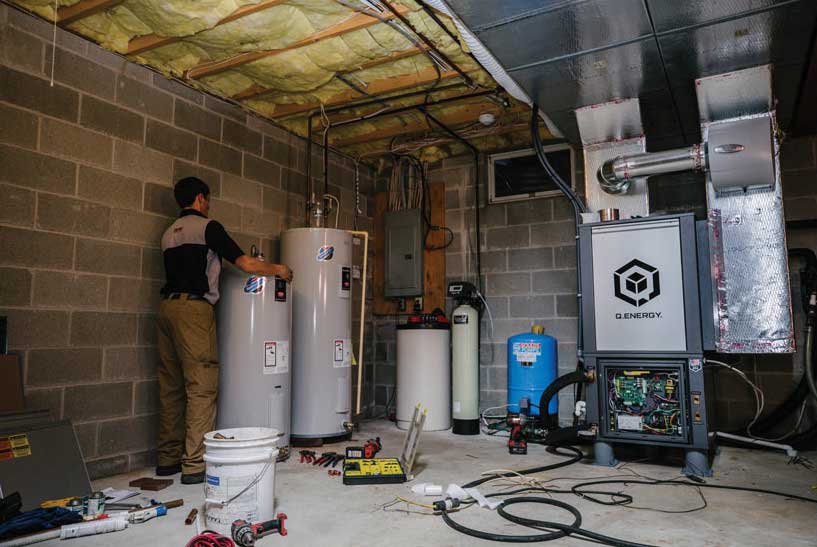 More robust equipment designs, along with availability of two-stage and variable-speed compressors, will continue to improve geothermal’s competitiveness in the market, but there are a few new headwinds.

“During the period of our highest geo sales — between 2005 and 2014 — energy costs were very high,” said Youndt. “Now, with lower fuel costs, I’m not sure we can expect the same level of interest we saw back then. But I do expect sales to grow steadily, thanks to the tax incentives.”

For companies like Vertex, and even for more homeowners who are facing retrofits or HVAC options on new home construction, credit is largely due to the efforts of GEO.

“Our hard-fought victory for the geothermal heat pump industry helps ensure a bright future for our technology,” said Dougherty. “It will stem the loss of jobs we now face, provide more time to overcome market barriers, achieve economies of scale, and help spread the environmental and economic benefits of geothermal heat pumps across America.”