Dig It: A Look Inside Geothermal Commercial Retrofit Opportunities

Despite broad potential and improving owner attitudes, many contractors leave this ground untapped

Heat started radiating from the center of the earth about 4.5 billion years ago, according to the Geothermal Energy Association. That landmark in geothermal history was eventually followed by the Commonwealth Building in Portland, Oregon, which became the first commercial building in the U.S. to employ a geothermal system for heating and cooling.

While that building is now an American Society of Plumbing Engineers (ASPE) National Historic Mechanical Engineering Landmark, the name of the owner or project team who later pioneered the narrower category of geothermal commercial retrofits has been lost in the mists of time. Fortunately, the physics and benefits of a geothermal upgrade are anything but a mystery; in fact, they are pretty straightforward.

“The biggest selling feature for a system is that a properly designed, installed, and priced system can cost similar to a conventional system, cost half as much to operate, and eliminate outside air condensers (so no outside noise),” said Dan Rau, LEED AP.

And Rau should know. As the president of Colorado Geothermal Drilling in Brighton, Colorado, he has been working exclusively on geothermal loop field installations for over a decade. His company has worked with HVAC contractors on more than 500 such projects so far, doing the parts of the job that are typically not in the contractor’s scope of work: loop field install, headering/manifolding, piping, purge of systems, etc.

Rabe Hardware in Iowa City, Iowa, represents another side of the companies working in this area. Rabe has been a full-service mechanical contractor offering mechanical, electrical, and plumbing (MEP) services since it started in 1979. The company has broadened its horizons, according to Jeremy Lang, who works in HVAC, geothermal, and solar sales and design for Rabe.

Coming at the sector from different angles, do these two organizations see this slice of the geothermal market the same way?

Both Rau and Lang agree on two key points when discussing commercial geothermal retrofits: Geothermal is a good engineering solution for almost any commercial retrofit, and the cost is usually the major obstacle. It may be in the ballpark with other replacement options, but it does not come in as the cheapest alternative.

On the first count, Rau said severe space issues or drilling conditions are the only real impediments, but these don’t happen very frequently.

“We’ve drilled inside buildings, under warehouses, driveways, and parking lots,” he said.

As for cost, Lang said potential customers must evaluate with the long term in mind. It’s important for business owners to consider the cost of ownership (property) and how much they’ll be spending on utilities throughout the term of ownership. In most cases, geothermal has a larger upfront investment, but after a number of years, the system will save enough in utility costs to offset the initial investment.

Lang added a key litmus test that can quickly rule out (or rule in) geothermal for a given project.

“We would never suggest geothermal to a business that does not own the building and/or does not pay the utility bill,” he said.

Contractors and engineers are well-versed in the consequences of an oversized or unnecessarily complicated system when it comes to performance and efficiency. Rau has seen that tendency have an even more severe impact inside this cost discussion.

“For a properly designed and installed system,” he said, “the cost may be able to be minimized with good design. Too often, when a system is ‘budgeted,’ an engineer may overdesign a system and overprice/oversize a loop field, and the ‘budget’ cost can kill the project before it begins.”

Making out the expected expense to be worse than it actually is could be the kiss of death for many potential geothermal installations, especially if owners already have other concerns weighing on their minds. One of those worries might be if or how geothermal will interfere with normal operations.

In Rau’s experience, drilling rarely creates any interruption for the occupants. The project team can also work with owners to create an optimal schedule for the other aspects of the retrofit. 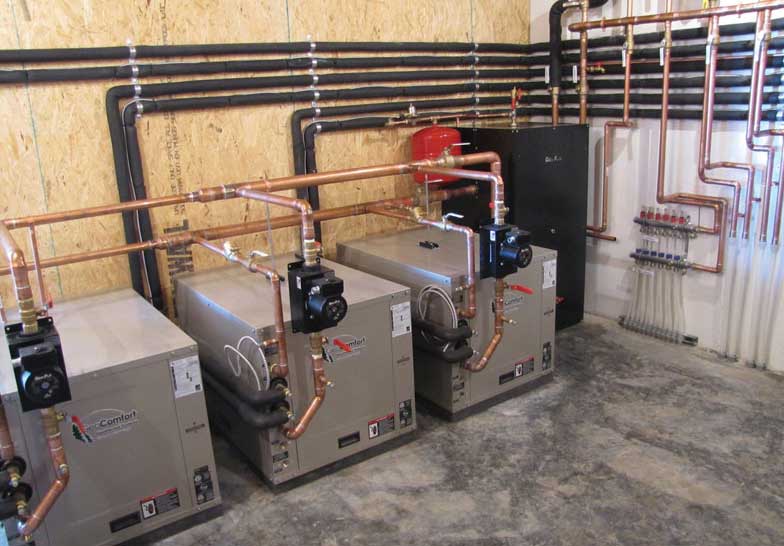 UNDERFLOOR HEATING: Geothermal can address more targeted but still critical purposes in a building. For this shop in Williamsburg, Iowa, the system’s trio of 5-ton water-to-water units worked to heat the radiant floor. PHOTO COURTESY OF RABE HARDWARE

He recalled a retrofit a few years ago at a 46,000-square-foot building that involved 84 300-foot vertical bores for over 100 tons of geothermal energy.

In that case, the loop field was installed with no interior space/office work being disrupted.

“Interior piping was done in phases throughout the building and had little effect on the office operation,” Rau said. “This building had 10 rooftop air source heat pumps that were replaced with geothermal rooftop units.”

In noncritical areas, Rau said the project team replaced those units during normal business hours. The remainder were swapped out after hours or over the weekend.

Lang has seen some retrofit-specific hurdles arise that also tie back into the overall cost of the project.

“Existing ductwork may not be adequate, even for a conventional system, because old building techniques and mechanical systems may not be designed with efficiency in mind,” he said. “Inefficiencies [in turn] require a larger geothermal heat pump, geothermal loop fields, and distribution systems (ductwork).”

He noted that one way or another, existing inefficiencies will find a way to affect the cost and should be considered when assessing system options.

Another potential source of expense, as some geothermal residential owners can attest, is the impact on landscaping. Lang said he usually suggests directional boring to cut down on the visible damage.

To compare the process to a knee injury, directional boring might represent the difference between the scars of conventional surgery and the small holes of arthroscopic surgery. However, enlisting that equipment is not cheap, either, and may offset some of the savings from avoided landscaping repairs.

Any commercial geothermal consideration should at least touch on not just the overall cost but the tax considerations compared to other systems.

Such tax incentives can and have changed over time, depending on various industries’ lobbying prowess and the shifting of electoral winds. The credit is scheduled to remain at 10 percent for all related construction that begins by Dec. 31, 2121. As things stand now, this particular tax credit will expire for all subsequent projects.

Even if sunset arrives for that particular incentive, owners may still find other payback enhancements in the form of utility rebates. Those utility programs vary from state to state and would be part of any proper preliminary research.

Lang noted that his team’s customer service includes making sure a design will meet the specific criteria to keep it eligible for any possible rebates.

Rau said that while the credits are of course a positive, they don’t figure in hugely to the decision on whether to do geothermal. As he noted previously, it’s really the long-term savings potential that attracts the right consideration.

HURRY BUT DON’T RUSH THE PROCESS

Does the commercial retrofit category present any differences in the business side of the project?

“Geothermal projects are more involved, and because commercial projects tend to be fast-paced, the installation requires a well-organized team and systems in place to streamline the process,” said Lang.

According to Rau, this can be time consuming.

“Sometimes, engineers spec less-efficient equipment or an incorrect loop design for the soil conditions, or [there are] missing parts to the system that later the contractor will require a change order for, which should’ve been included in the original scope and cost of the system,” he said.

That sort of inspection takes energy, and Rau also echoed a sentiment that turned up in other research for this article: “It is fairly normal for us to work with contractors and engineers who haven’t done much geothermal design/installation,” he said.

ROOM IN THE LOOP

Over the years, the heat pump technology has evolved, just as a lot of other HVAC equipment has. The evolution of variable-speed technology helped. Lang has seen a steady improvement on the owners’ side with regard to prioritizing energy efficiency. Part of that, he said, has come from the realization that reducing long-term energy costs can free up money for other vital capital projects.

Yet it remains unclear if the contractor pool for geothermal work has expanded at the same pace. A firm like Rau’s seems to deliver substantial value not just in the drilling but in the accumulated wisdom added to the project team.

Anecdotally, rookie or near-rookie contractors are the norm, and yet geothermal commercial retrofits are not something an HVAC contractor would or should jump into without considerable advance work.

Of course, after 4.5 billion years, the opportunity to get up to speed and deliver exceedingly sustainable heating and cooling isn’t going anywhere. The Geothermal Energy Association reports that 42 million MW of power flow from the Earth’s interior, primarily by conduction.

If owner interest can spur more contractors to get project-ready for these systems, geothermal might continue its long journey from underground phenomenon to mainstream commercial success — boosting contractor revenue along the way.