Casino Opts for HVAC Skill Over Taking a Chance

Since opening its doors in the summer of 2002, Pechanga Resort & Casino has become a popular West Coast destination for live entertainment, fine and casual dining, and invigorating games of chance. In alignment with the surrounding Temecula Valley region, Pechanga has experienced significant growth over the past 15 years — attracting a loyal regional following and drawing visitors from neighboring counties, surrounding states, and even other continents like Europe and Asia.

As Pechanga’s patronage continued to increase, it became clear to ownership that expansion was on the horizon.

In 2015, Pechanga held an official groundbreaking to add 568 rooms and suites to its existing hotel facilities and to expand the resort’s dining, spa, outdoor recreation, and meeting facilities.

According to John Flaherty, vice president of facilities at Pechanga, nearly 70,000 square feet of additional ballroom and meeting space was also included in the expansion plans to accommodate larger conferences and events in the future.

Shortly after the first phase of construction — which created a new five-level, state-of-the-art parking structure — the project’s Los Angeles-based general contractor, Tutor Perini Corp., was inclined to make a change to the original mechanical system design of the hotel tower plans.

“Despite the tight construction timeline, we felt compelled to consider another option for the nearly 700 vertical stack fan coil units to be installed throughout the three new hotel wings,” said Bill Abbott, project manager at Tutor Perini. “With sovereign entity projects, particularly of this scope, we assume a lot of potential risk, and we wanted to make sure we were working with a mechanical equipment provider dedicated to top-notch, white-glove service and one that could work outside the box if needed.”

“The general contractor wanted a manufacturer that was hands-on and could provide exceptional customer support as well as proprietary equipment designs,” explained Dan Reeves, sales engineer at ATC. “They had worked with The Whalen Co. on a previous sovereign entity project and felt confident the company could provide a custom mechanical system solution — particularly considering the large scope of required units and aggressive overall construction timeline.”

Reeves and the ATC team met with engineering and product management staff from the Easton, Maryland-based Whalen Co. to further examine what might be possible for the project.

“We were dealing with several variables on the Pechanga project, including code requirements for hotel room units able to deliver outside air,” he said.

“Traditionally, vertical stack fan coils take in outside air from ducting that connects to the side and toward the bottom of the unit,” Reeves said. “The air is then conditioned by the coil and discharged out of a grill at the top. With this type of unit design, ductwork must be run up against the side of the fan coil, connecting the unit’s air inlet to the air movement mechanism outside the building. As imagined, the sheet metal labor required to achieve this can be rather substantial, resulting in an extended construction timeline and elevated material and labor costs.”

Reeves was pleased to discover that, with longstanding industry experience, The Whalen Co. had recently developed a unique fan coil unit design to address this particular challenge. This new “internal duct” outside air option eliminates the need for any duct work that would otherwise be external to the cabinet, as it is preinstalled on the inside of Whalen’s fan coil unit cabinet in the plenum section. In addition to reducing installation costs associated with sheet metal material, Whalen’s internal duct design allows for the outside air to be delivered prior to the coil and filter, thus enabling its prefiltering and preconditioning. 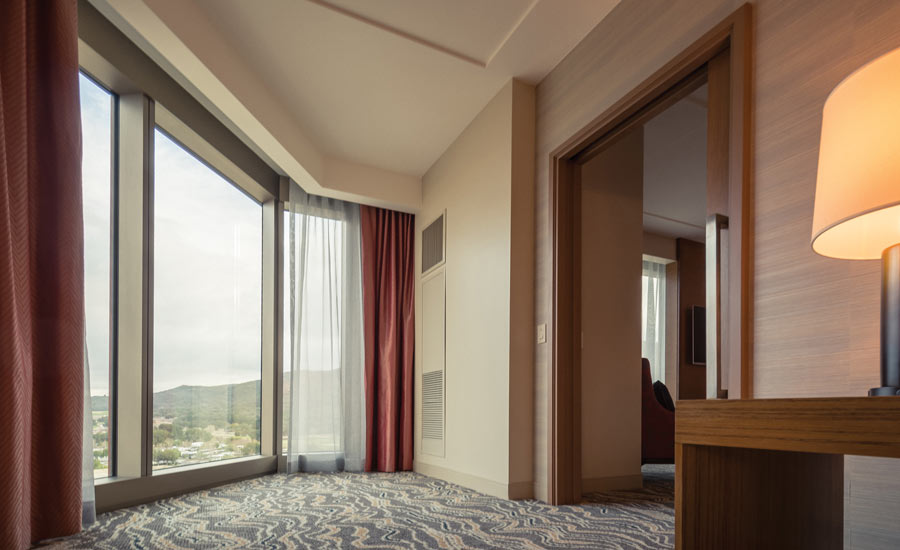 STANDING TALL: The Pechanga project was successful, thanks to the Inteli-line vertical stack fan coil from The Whalen Co.

“Our Inteli-line® vertical stack fan coil unit is fully asembled with factory-installed piping packages, controls, and risers,” said Tony Landers, vice president of sales and marketing at Whalen. “We provide a complete solution when it comes to any required connection piping; the unit is ideal for installation in multi-floor commercial applications like hotels, apartments, and dormitories. Its small footprint also facilitates the ability to be furred into columns and walls as well as tighter spaces like closets. This translates to the creation of more usable, functional square footage for occupants, which, for a hotel application like Pechanga, was particularly key.”

According to Landers, the Pechanga project likely stood to save hundreds of thousands of dollars in labor and material costs by opting for use of the Inteli-line vertical stack fan coil from Whalen.

Reeves and the Whalen team worked to deliver a number of Inteli-line units at the Pechanga job site later in 2016, as the project continued to progress. During that time, Reeves had the opportunity to demonstrate several additional benefits to both the general contractor and the MEP firm.

“In addition to integrated piping, Whalen’s Inteli-line has a slide-out chassis that provides huge installation and maintenance benefits,” Reeves said. “We were able to demonstrate this advantage to Pechanga’s facility management staff, and they were very impressed to see us do so in less than two minutes’ time.”

According to Reeves, fan coil unit installation — particularly in multistory applications — requires aligning the unit above with the riser of the unit on the floor below.

“This can be tricky, as you’re propping up and shifting the unit around during this whole process,” he said. “There’s no way it can be a one-man job. With a removable chassis, however, the housing itself can be installed initially and independently, making it possible for a single person to manage.”

“With the slide-out chassis version of Whalen’s Inteli-line vertical stack valve control fan coil unit, the chassis can be removed or installed using just four fasteners,” said Landers. “This means we have the ability to ship the chassis components separate from the cabinet, so they’re not just sitting around the job site accumulating dust or, even worse, at risk for being damaged or stolen. The Inteli-line offers further benefit in ongoing maintenance, with easy access to the drain pan and all internal components, and the ability to replace just the chassis if necessary. For Pechanga, this meant minimizing any hotel room inventory downtime while servicing the units.”

Additionally, 70 horizontal fan coil units were specified for the other areas of the resort expansion.

Staged delivery of the units began in February 2017, with the vertical stack fan coil unit cabinets shipping in advance of the chassis components. Mechanical component installation began shortly thereafter, and with an aim of completing construction of all hotel rooms prior to the end of the year, both University Mechanical and The Whalen Co. were required to perform in alignment with the aggressive construction schedule.

“We made a plan to work our way up the building, with a goal of installing all primary units first on the lowest three floors, after which the secondary units, which share the primaries’ risers, would be installed,” explained Ted Obrockta, former mechanical project manager at University Mechanical. “That way, all the pipe would be exposed and ready as we installed each secondary unit, and we could work as quickly as possible to stay in line with construction deadlines. To remain on track, we planned to tackle 15 to 20 units a day, with installers working double and even triple shifts each day.”

“The installation schedule was bordering on unrealistic at certain points, despite everyone working as hard and smart as possible,” said Reeves. “On more than one occasion, Whalen worked with us and was able to shift things around on their manufacturing lines to meet — and even exceed — drop schedules for the cabinets.”

Mechanical system installation wrapped up in fall 2017, with testing and balancing following throughout the last months of the year.

Evie Sibert is the marketing manager for The Whalen Co. She can be reached at esibert@whalencompany.com.