Just about everyone is familiar with Uber’s dynamic (or surge) pricing model, which increases or decreases fares based on the supply of drivers compared to the demand of riders. So, for example, if only one driver is available and 10 people are asking for a ride, then Uber automatically increases the fare. This is not a new pricing model, as hotels and airlines have been using it for years.

But now, some are calling for the same model to be used in the HVACR contracting world, especially during peak times like summer, when demand for technicians often outstrips supply. While this may raise profits in the short term, some believe that it could lead to frustrated customers in the long run.

It all boils down to supply and demand, said Chad Baumann, sales and marketing manager, Baumann & DeGroot, Holland, Michigan. 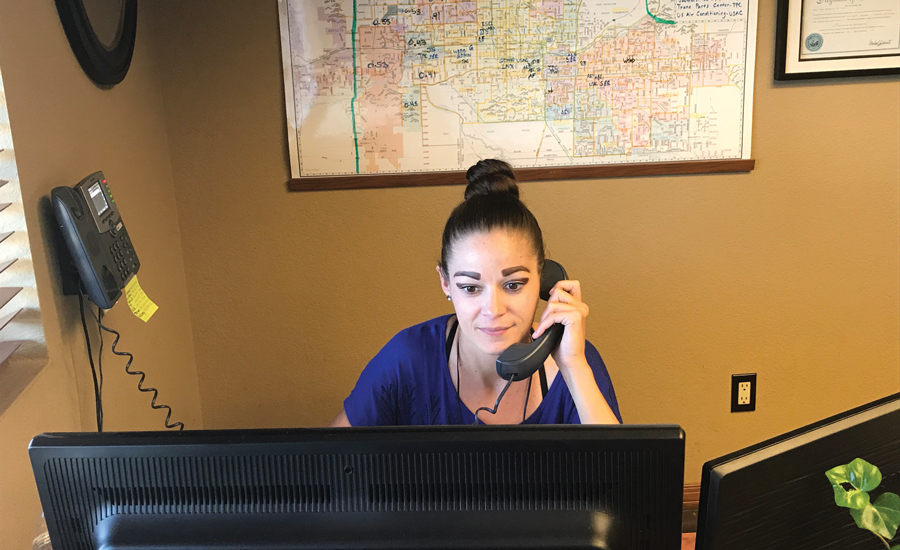 “As a whole, the HVAC industry is understaffed, and we are a weather-dependent industry,” he said. “When it gets swelteringly hot or bitterly cold, our demand skyrockets; however, we don’t have reserve technicians or a slush fund of additional labor to match that, so we are forced to work overtime. When our whole staff is working overtime to accommodate the workload, we can’t afford to be working at regular rates.”

That is why pricing at Baumann & DeGroot usually increases slightly during busy periods. Baumann estimates that the company may charge about 10 percent more during peak times than they do at slower times of the year in order to cover overtime.

Because HVAC contractors sell a commodity — much like oil or precious metals — supply and demand will dictate the margins as well as the pricing levels, said Jason Ellington, president, Ellington Air Conditioning and Heat, Rockledge, Florida.

“Granted, we are not mining for platinum; however, we only have so many labor hours in a month that we can sell,” he said. “Therefore, recognizing the scarcity of supply is paramount.”

That said, the strategy of raising the price as demand increases isn’t any different than in any other corporation, added Ellington. And by employing such a strategy, he believes contractors can take some of the peaks and valleys out of their businesses by offering discounts or incentives during the slow seasons.

While noting that the dynamic pricing model could work in the HVACR industry, Rich Morgan, president, Magic Touch Mechanical Inc., Mesa, Arizona, adds that it can come with its own set of problems. One of those problems could be customers who are expecting to pay a certain amount based on prior service, and they are caught off guard when charged a higher price during peak season. Another problem could involve customers comparing notes about the price they paid for service, and if it’s substantially different, they could become angry and take out their frustrations in online reviews.

“While it may make sense to us as contractors and seems reasonable enough that you would think the general public would understand, unfortunately, there are many people who will not,” said Morgan. “Even at everyday consistent pricing, when a customer starts shopping around and finds a lower price from a one-man-show (or starts pricing components online), we can explain overhead cost differences until we are blue in the face and rarely sway their determination that we are ‘rip offs’ and ‘scam artists.’ Read any 1-star contractor review, and they almost always contain one of those phrases or similar verbiage.”

Dynamic pricing may also not work as well on the commercial side, where long-term preventive maintenance agreements, for example, are typically negotiated up front and costs are either fixed or adjusted annually. When it comes to service work, overtime is the tool used by Pleune Service Co., Grand Rapids, Michigan, to dampen demand during peak times, said president and CEO, Ken Misiewicz.

“If customers need us, we’ll come out 24/7, no matter what, but they have to decide if the after-hours cost of overtime is worth it to them based on their situation,” he said. “While we do run service calls after hours on a regular basis, it’s just as common for a customer to have us come out the following day on regular time. Overall, we’ve found the best strategy for us is to be steady and consistent because the majority of our business is with long-term, repeat customers, and we certainly don’t want to come off as a moving target or trying to take advantage of a short-term situation.”

With that in mind, it’s important that contractors don’t lose sight of the fact that peak seasons usually result in a lot of overtime, and those additional labor costs are often not accounted for in many pricing structures, said Ellington.

“The real trick to all of this isn’t so much a question of should we match supply and demand to pricing, but more of a question of how do we do that.”

Indeed, coming up with the right pricing strategy can be tricky, because contractors need to factor in a number of different costs, including overhead and labor, which usually fluctuate over the course of the year. That’s why Drew Cameron — faculty member of Electric & Gas Industries Association (EGIA) Contractor University, and president of HVAC Sellutions, a training, coaching, and performance enhancement organization — believes that contractors need to take the time to create a comprehensive price book each year that will ensure profitability and customer satisfaction. 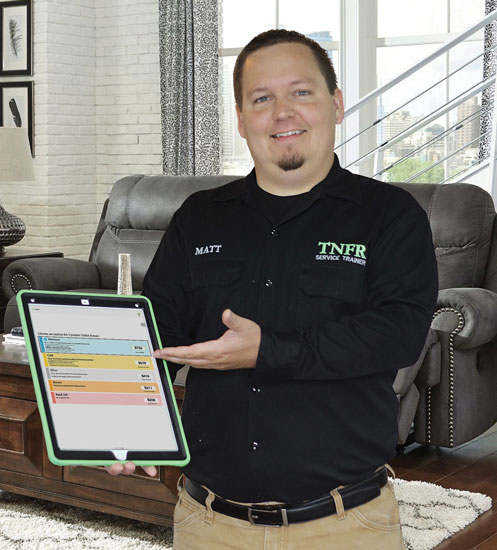 READ THE MENU: Matt Koop, vice president of training and implementation at The New Flat Rate, teaches technicians how to use menu pricing with their customers.

“I always look at things from the perspective of the customer experience — what’s going to yield the most consistent customer experience throughout the year?” Cameron asked. “I believe that creating a price book for both service and installation will result in the best experience. Then, when things get slower and contractors want to take something off the book price, that’s OK, but then it’s advertised, it’s marketed, it’s on television, it’s in print — it’s documented and consistent across the board.”

So where service is concerned, contractors’ price books could include progressive specials. For example, in July when it’s busy, contractors could charge their normal book price of $129 for a tuneup. However, in June, when business is slower, the promotional price could drop to $99; in May, it could drop to $79 to reflect preseason demand. But these prices will be documented in the price book and consistent for all customers, noted Cameron.

“Contractors need to set their prices to where they can make a fair amount of profit — the right amount of profit to run their businesses — and be consistent with their levels of service year-round,” he said.

That’s where some contractors get into trouble, because they don’t always factor in all the costs associated with a job. As National Comfort Institute’s (NCI’s) director of business training and coaching, David Holt, explained, contractors need to make sure they are pricing jobs to factor in the landed cost of equipment, which includes all the costs associated with a product “landing” at the shop, such as shipping costs and sales tax.

They also need to make sure they are taking into account all the labor costs associated with jobs performed throughout the year. As Holt noted, with extreme weather conditions, the cost to perform the work goes up because employees working in really hot attics, for example, will need to take frequent breaks to ensure their health and safety. So a job that may have only taken half a day to complete during mild weather conditions may now take a whole day. Or perhaps it will take one really long day that will also include overtime.

“Extreme weather conditions automatically drive up job costs,” said Holt. “Therefore, contractors have to adjust their prices to compensate for that. Otherwise, when they’re getting more opportunities to do more work, they’re actually making less money, and that’s not a good business proposition.”

That’s why Holt is also a fan of having a price book.

“Personally, I’d like to see the price based on a contractor’s highest cost throughout the year,” he said. “So peak season pricing is what I would have as my standardized price. And then during slow seasons, I could offer a discount and still know that I’m making a profit. In my opinion, it’s better to have a standard price that your company represents throughout the year and offer discounts to encourage people to take advantage of offseason situations.”

Just because the Uber model of dynamic pricing may be prevalent in many industries, it is probably not the best solution for HVACR contractors, said Danielle Putnam, president, The New Flat Rate.

“Contractors today are working hard to build their company brands,” she said. “So why should they raise and lower their prices, providing inconsistency for their customers? Instead, they should consider using true dynamic pricing, which comes in the form of a menu.”

With menu pricing, the customer is presented with a list of choices after a diagnosis. Then they can pick and choose their level of service, explained Putnam.

“If it’s peak season and after hours, and your customer chooses the bottom option — a quick fix — then terrific,” she said. “You perform the repair in the shortest amount of time, and you’re off to the next call after collecting the money. This ensures the entire job is billable time.”

However, if it’s peak season and after hours on the weekend and the customer chooses a top option, then they just bought your day, said Putnam.

“No pressure, no price objections, no buyer’s remorse or sales resistance,” she said. “And actually, if you look closely, Uber and Lyft do that too … they have a menu of car types, and you can choose economy to premium. So even if their prices are changing, they still give power to the consumer to choose based on their budget.”

The key for contractors is to truly understand all their costs and charge a competitive price that will keep them in business. As Jack Tester, president and CEO of Nexstar Network, noted, “We do not recommend price changes based on weather events. We do recommend that contractors review their pricing twice a year. This does not necessarily mean a price increase, but it is verifying that their direct and indirect costs will be recovered — plus a fair profit.”