Things are looking good for HARDI members as we head into 2015.  The U.S. economy, the housing industry and commercial construction are all forecast to expand at reasonable levels through the coming year. 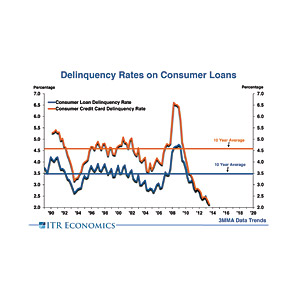 The all-important consumer is in a good financial position.  Delinquency Rates on Consumer Loans (chart below) are very low.  The level of delinquency has dropped below the cyclical lows established in 1993 and 2004-05, suggesting that the consumer is in a good position to spend cash. We are adding debt to our personal balance sheets, but at a manageable pace. With a rising trend in employment and a mild cyclical rise in Disposable Personal Income under way, the consumer is in better shape heading into the end of the year than we had thought would be the case.  HARDI members should benefit from the demand-pull of consumer spending.

We have been forecasting that interest rates would stay flat through mid-2015, and that is still the case.  Mortgages, auto loans and consumer credit in general remain affordable and are posing no threat to the economy at this time.  Expect the beginnings of a sustained upward movement in interest rates in the latter half of 2015.

The ITR Leading Indicator is also providing a glimpse of better days ahead.  The recent upturn in the ITR Leading Indicator is not yet statistically significant, but it is likely to continue, and our indicator is thus providing positive input for later next year.  Business-to-business activity, as evidenced by Capital Goods New Orders (without aircraft), is also showing upside business cycle movement and is giving us a positive view of 2015.  Leading indicator activity suggests that the business-to-business activity will slow in its rate of rise in 2015.

Corporate Profits as a dollar amount are not a problem and bode well for more economic growth.  Corporate Profits on a rate-of-change basis are clearly indicative of a slower rate of rise in the U.S. economy in 2015, and HARDI members have a clear relationship to U.S. Industrial Production, our benchmark of U.S. economic activity.  We are not expecting significant problems with future earnings reports, just enough of a change to take some of the edge off the rate of growth in general.  HARDI members may experience the same diminished rate of growth in annual profits in the coming year.

Housing Starts have seen wild swings in the monthly data in the third quarter 2014.  The seasonal rise through July was milder than average, but the seasonal decline since July has been milder than normal.  All in all, the internal and external input portend a slow rise in the amount of starts with an estimated growth rate of 9.2 percent nationally in 2015.  Housing affordability is an issue for first-time buyers, but rising wages should help ease some of this pain in 2015.

Activity will vary within the HARDI regions.  We will look at the regions more closely, as well as activity in multi-unit construction and remodeling activity when we get together for the annual meeting.

Private Commercial Buildings Construction, at $52.5 billion, has risen to the highest level of spending in five years.  The annual growth rate of 12.3 percent is the best in 18 months.  The near-term forecast is for a faster rate of growth.  We are forecasting that the growth rate will slow considerably in 2015, but remember, that just means the rate of rise in the dollars spent will slow in their ascent.  The slower rate of growth in the coming quarters is being signaled by the Commercial and Industrial Billings Indexes. More money will be spent in 2015, and HARDI members should anticipate an increase in demand from 2014 levels.  The mistake would come in straight-lining the rate of increase in demand.  Keep inventory levels reasonable and the sales pressure “on” in various segments of the commercial construction realm.  We will be discussing these various segments by region at the annual meeting.

Overall, this is a great time to examine your business for any bottlenecks that may inhibit your growth potential or that might cause an unnecessary increase in your cost structure.  Remember to keep an eye on 2016; right now, it looks like you will be considerably busier in 2016 than you are now.