BOISE, Idaho — California is leading many state governments in increasing pressure on supermarkets to replace systems that use HFCs with units that utilize natural refrigerants, such as propane, CO2, and ammonia, which have a lower GWP. But there is a lot of confusion surrounding when and where these refrigerants can be used, and the refrigeration industry is looking for guidance on how to address these challenges.

The North American Sustainable Refrigeration Council (NASRC) sought to provide some of that guidance in a workshop it recently offered. The speakers covered everything from current trends affecting the refrigeration industry to the various refrigerant options available for refrigeration systems. The lively interactive format prompted a lot of conversation — and debate — amongst attendees and offered greater insight into some of the complex issues that are associated with alternative refrigerants.

Keilly Witman, owner of KW Refrigerant Management Strategy, a consulting firm specializing in the supermarket industry in Boise, Idaho, started off the workshop by outlining some of the megatrends that she believes will impact the refrigeration market. One megatrend concerns the increasing number of Americans moving to urban areas. She noted that over 70 percent of the U.S. population lives in one of 486 urbanized areas, and the prediction is that number will continue to increase.

“Younger people don’t need or want a car in urban areas, and they want to be close to where they go shopping,” she said. “This means that there will be a need to increase the number of stores that are built in urban areas. However, due to the lack of open land in those areas, it is likely that supermarkets will be taking over existing buildings and adapting technology to fit the existing building design, which can be restrictive.”

In addition, existing buildings are often rented or leased, which means landlords can increase the rent over time. Landlords often believe that after supermarket owners invest millions of dollars in permanent refrigerant technology, they will opt to pay higher rents rather than move. However, that scenario may be changing, said Witman, as new technologies, such as portable refrigeration equipment and modular solutions, offer more flexible options that can easily adapt to an existing space as well as allow owners to move the equipment completely if they decide not to renew their lease.

Unfortunately, current codes and standards are not keeping up with the demand for new technology solutions, which is another megatrend that Witman identified.

“Technology advances are coming at us faster and faster,” said Witman. “And guess what? Our codes and standards bodies are not set up to manage that. Their bureaucratic processes are set up to handle a technology advance maybe every 10 years. They are so far behind the times right now that it’s not even funny.”

Many of these advanced technologies are being used all over the world except the U.S. So U.S. supermarket owners are very aware of what they are missing out on. If U.S. manufacturers don’t yet offer a particular technology that is available in other countries, supermarket end users are not afraid to go outside the country to get what they want. And they aren’t afraid to find ways around the lagging codes and standards organizations, either.

That is how a propane CO2 cascade system came to be installed in a supermarket in California, said Witman. “There is no SNAP [significant new alternatives policy] regulation for this technology. It’s not in any codes. It’s not in any standards. But guess what? It exists. The end user received SNAP test market approval, and they bypassed the U.S. standards organizations and went right to the local authority having jurisdiction. There is a way around all of these things, and end users are going to start doing that more and more if our standards organizations don’t get their acts together. And that’s not necessarily a good thing.”

In addition to getting around lagging codes and standards, end users will also be seeking to avoid the increasing regulatory burden on refrigerants, which is another megatrend that Witman identified. She noted that even though the Trump administration is not big on regulations, there are still many regulations already on the books, such as the expansion of the Environmental Protection Agency’s (EPA’s) Section 608, the SNAP program, the impending Kigali Amendment, and state regulations.

Many end users may respond to the increasing regulatory burden by stockpiling refrigerant or utilizing equipment that has less than 50 pounds of refrigerant — or maybe even moving their HFC refrigeration equipment to other states that do not have strict refrigerant regulations.

Rusty Walker, a senior corporate trainer at Hillphoenix, Conyers, Georgia, spoke about the benefits of CO2 refrigeration systems, noting that other parts of the world are far ahead of the U.S. in using this technology. 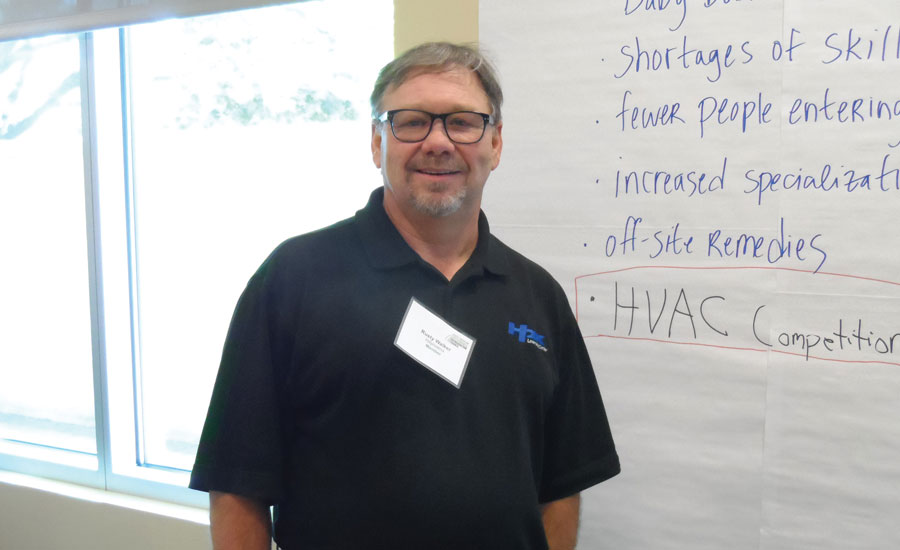 CO2 LAGGING IN U.S: Speaker Rusty Walker talked about the benefits of using CO2 as a refrigerant, noting that the U.S. is far behind Europe in its adoption of this type of equipment.

“We’re easily five to 10 years behind Europe in terms of technology, electronics, controls, and refrigeration systems,” he said. “There are over 9,000 CO2 booster systems installed in Europe compared to only 336 systems in the U.S.”

But that is starting to change due to increasing regulations and greater consumer awareness. He said that there are numerous benefits to using CO2 as a refrigerant, including the fact that it is naturally occurring in the atmosphere and also inexpensive. In addition, it has thermodynamic qualities with high heat transfer coefficients.

Ammonia is another future-proof refrigerant that should be considered, noted the next speaker, Randy Fernandez, national sales manager, Kysor Warren, Boise, Idaho.

“Ammonia is a solid refrigerant because it has a GWP of 0, it has excellent thermodynamic qualities, and it has a recognizable odor,” he said.

The last point is important in identifying refrigerant leaks before they can become a safety hazard.

Fernandez described how an ammonia system was successfully installed in a Piggly Wiggly store in Columbus, Georgia, in 2015. The refrigeration system design utilizes ammonia (NH3) and CO2 as refrigerants in a cascade arrangement and only contains 53 pounds of ammonia. Because supermarket ammonia systems use so little ammonia, most of the Occupational Safety and Health Administration (OSHA) regulations commonly associated with use of this refrigerant do not apply. And, best of all, the new refrigeration system resulted in a 22 percent reduction in energy costs, and the store was able to recoup its investment in only three years. 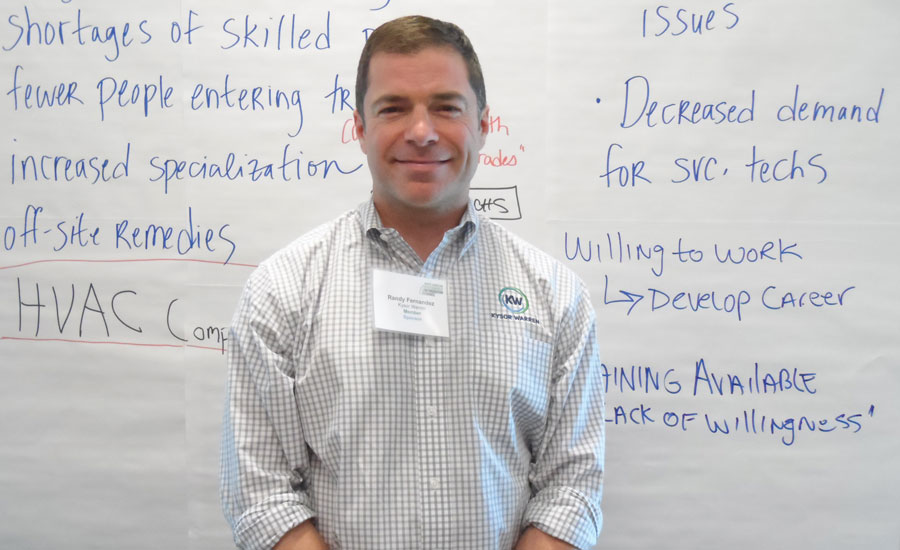 AMMONIA IS GOOD: There are good reasons to choose ammonia for a refrigeration system, as it has a GWP of 0 as well as excellent thermodynamic qualities, noted speaker Randy Fernandez.

There are other benefits to choosing ammonia, explained Fernandez, including the fact that refrigerant leaks do not need to be reported; it is low cost, with current prices around $2 per pound; and total cost of ownership is about 20 percent less than an HFC system. In addition, ammonia offers a pull down time that is approximately 70 percent faster than an HFC system, he said.

“It has always been accepted wisdom that central rack systems with remote cases were more energy efficient, cheaper to install, and very robust,” he said.

Barrett predicts that self-contained propane systems will be used more extensively in the future because this new generation of cases offers an energy efficiency advantage over remote cases. “They are quiet, there is very little maintenance, and you don’t have the traditional costly and time-consuming installation,” he said. “Plus, self-contained units can be moved around, which offers unheard-of flexibility to the merchandising people. In addition, propane has a lot of positive qualities, including being non-corrosive; it is compatible with existing components; it can be used with semi-hermetic and hermetic compressors; it has operating pressures similar to R-22; and it is widely used around the world.”

Todd Washburn, director of sales and marketing of True Manufacturing, O’Fallon, Missouri, added that propane has an ozone depletion potential (ODP) of 0; a GWP of 3; it is efficient; offers increased reliability; and is exempt from EPA Section 608.

Indeed, self-contained propane units can now be found throughout Target stores in the U.S., and the subsequent energy savings has been impressive. When factoring in the more efficient motors, better lighting, and other technology advances in the new systems, the efficiency gain in Target stores was 53 percent, said Washburn.

“When changing out like-for-like systems with the same motors and everything, we’re seeing a 15 to 25 efficiency gain, just with the refrigerant change,” he said.

While propane may have some wonderful properties, its widespread adoption in larger systems is being held back by the lagging codes and standards, which were discussed earlier. Right now, EPA mandates that only 5.3 ounces (150 grams) of propane can be used in each separate refrigerant circuit in stand-alone retail units, which basically limits its use to smaller equipment. NASRC is working to raise that limit to 500 grams in the near future.

To that end, NASRC recently started an online petition that calls for the expedited revision of existing codes and standards to allow for greater use of low-GWP refrigerants in commercial refrigeration. Witman urged all attendees to go online at http://nasrc.org/petition-for-expedited-revision to support the effort.