This website requires certain cookies to work and uses other cookies to help you have the best experience. By visiting this website, certain cookies have already been set, which you may delete and block. By closing this message or continuing to use our site, you agree to the use of cookies. Visit our updated privacy and cookie policy to learn more.
Home » Best Practices For Charging a Residential Cooling System With Refrigerant
HVAC Residential MarketRefrigerationAir ConditionersRefrigerants

Best Practices For Charging a Residential Cooling System With Refrigerant

Take the guesswork out of charging a system

It seems like charging a residential cooling system with refrigerant should be a fairly straightforward procedure. After all, most manufacturers’ installation manuals contain step-by-step instructions on how to properly charge their systems. Some manufacturers even offer helpful devices that are supposed to take the guesswork out of it.

So if all this information is readily available, why do technicians still struggle with properly charging an air conditioner or heat pump? According to Bryan Orr, co-founder of Kalos Services Inc. in Orlando, Florida, and creator of HVACRSchool.com and the HVAC School Podcast, it often comes down to poor training and bad habits.

“Old habits are passed down from one tech to another, and they are hard to break,” said Orr. “And the problem is compounded by overworked techs who aren’t given the time, tools, or training to test the system properly before getting hounded to get to the next job. Techs have been used to winging refrigerant charge for so many years that getting them to take the time now is a challenge. But it’s a challenge we need to face as an industry.”

It is important to address the issue of over- or undercharging a system because both can result in serious consequences for the homeowner. As Scott Merritt, owner, Fire and Ice Heating and Air Conditioning, Columbus, Ohio, noted, a system with too much refrigerant will be loud, draw more energy than necessary, and have high compressor amps and a shortened life span. 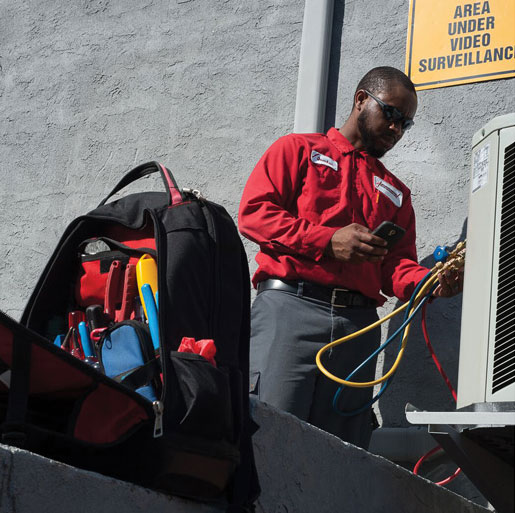 “A system with too little refrigerant will not cool/heat or dehumidify properly, will run longer than it should, and will also have a shortened life span,” he said.

When a cooling system has too much refrigerant, the most recognizable symptom will be condenser short cycling, said Quenton Jacobs, lead service technician, Difilippo’s Service Co., Paoli, Pennsylvania. Homeowners will likely notice that the condenser will run for a few minutes, then cut off due to the high-pressure switch, then turn back on once the pressure reduces.

“This will directly affect the performance of the air conditioner, especially on very hot days, because the compressor will never be able to pump enough refrigerant to actually cool the home,” said Jacobs.

Technicians will be able to distinguish overcharge from other types of issues because the system will exhibit high head pressure and condensing temperature, high subcooling, and normal to high suction pressure and evaporator temperature, said Orr.

“Depending on the severity of overcharge, the consequences can go from slightly high compressor power consumption and decreased capacity, all the way up to very poor performance and compressor overload, pressure switch tripping, and compressor bypass,” he said.

In a system that is severely overcharged with refrigerant, the pressure will be much higher than normal, driving the evaporator at a higher temperature, said Rick Ruscigno, HVACR instructor at Lincoln Technical Institute, Union, New Jersey.

“The condenser will also be flooded and barely able to reject heat, and there is a greater opportunity for liquid floodback and fatal compressor damage,” he said. “The compressor’s amperage will be much higher than expected, and if left unchecked, the system will be destined to fail. Keep in mind this may not be covered under any warranty, as this is likely not a manufacturer’s failure.”

Overcharging a system is actually quite easy to do, explained Ruscigno, because if the ambient temperature is low on the day of start-up, the technician may mistake the low system pressures for low charge. In these instances, technicians should employ special procedures like covering the condenser coil to “trick” the condenser into thinking that it is warmer. 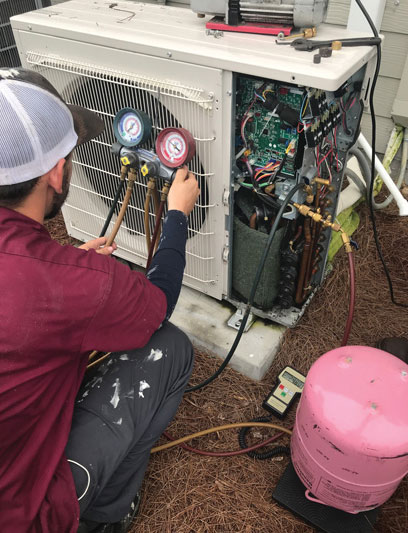 “Another common mistake is not allowing the system to achieve a steady state,” said Ruscigno. “It is imperative to wait 15 to 20 minutes after initially starting the system for the pressure and temperature to stabilize. A classic rule of thumb suggests that the suction line needs to be ‘beer-can cold,’ but that measure does not apply to modern equipment.”

“There will be no cooling whatsoever in addition to the damage already done,” he said. “Many manufacturers are installing low-pressure safeties to prevent this occurrence.”

There are several reasons why a system may not have enough refrigerant, but it is usually because it was either not charged correctly in the first place, or it has a leak. When a system is suspected of having a leak, technicians should use a leak detector to examine the indoor evaporator coil and the outdoor condenser coil, as well as the line set that connects the two, noted Jacobs.

“Once the leak is found, it should either be repaired, or the unit should be replaced, depending on the location of the leak and the age of the system,” he said.

Leaks are less likely to occur, however, if best practices are followed from the outset. This includes pressurizing a newly installed system with an inert gas and testing it for leaks in the system, explained Silberstein.

“Once this is done, the system must be evacuated to at least 500 microns, and when an acceptable vacuum has been reached, it must hold the vacuum to confirm that there are no leaks,” he said. “If these procedures are followed, and measurements still indicate an undercharge, then it can usually be concluded that an insufficient amount of refrigerant was introduced into the system.”

Again, this is less likely to happen if best practices are followed, because once a system is charged at the time of initial installation, a complete set of system readings should be taken, which will indicate if there are any problems.

The manufacturers are the experts when it comes to charging their equipment, so whenever possible, their guidelines should be followed. The charging method is usually determined by the type of metering device used, so the condenser subcooling method is typically used with a thermostatic expansion valve (TXV), and the evaporator superheat method is usually used with fixed-orifice devices, explained Merritt. 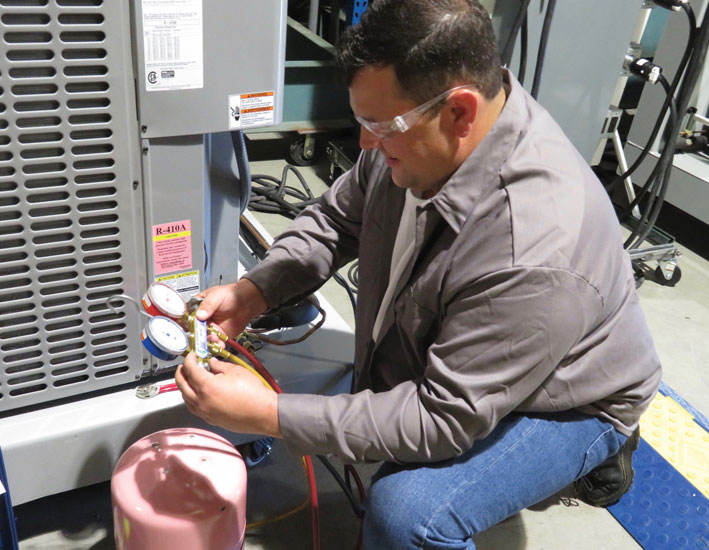 “Although the weigh-in charge may be used for any system,” he said.

When charging a system with a fixed-orifice metering device, such as a capillary tube, the typical target evaporator superheat should be between 8° and 12°F, said Silberstein.

If the system is equipped with an expansion-type metering device, such as a TXV, it should be charged using the condenser subcooling method, said Silberstein, and a typical target subcooling value is between 10° and 15°.

“Condenser subcooling is calculated by subtracting the liquid line temperature at the outlet of the condenser from the condenser saturation temperature (as determined from the gauge manifold and a pressure/temperature chart),” he said. “If this difference is lower than desired, additional refrigerant must be added to the system. If this difference is higher than desired, refrigerant must be recovered from the system.”

To ensure these measurements are correct, technicians must be equipped with quality pressure gauges and thermometers, said Orr. Otherwise, they may think the system is charged properly when it’s not; gauges can sometimes be off by 5 psi or more.

“Technicians need to have proper air probes that measure humidity and temperature, quality temperature clamps, a good magnahelic gauge or manometer for testing air static pressure, and a well-calibrated gauge manifold or pressure probes in order to properly set a charge,” said Orr.

He suggests setting the proper system airflow first, based on the system specifications and the ACCA Manual J/Manual S design.

“Exact charging guidelines can vary from manufacturer to manufacturer, especially where certain components, such as microchannel condensers, are concerned,” said Orr. “However, if technicians know the basics of superheat, subcooling, delta T, and compression ratio that can be derived from these readings, they will be able to spot a problem with any system.”

Given all the information currently available from manufacturers, there is no reason that a system should not be charged properly.

“And with the advancement of technology, we now have digital gauges, digital sling psychrometers, and digital thermometers that are 99.9 percent accurate,” said Jacobs. “I think it’s actually harder to charge a system incorrectly than it is to charge the correct way.”

Banish These Rules of Thumb

When it comes to charging a cooling system, many older technicians utilize rules of thumb that are not acceptable in the field, said Eugene Silberstein, director of technical education and standards, The ESCO Institute in Mount Prospect, Illionois. These include:

These rules of thumb are even less acceptable for use on today’s higher-efficiency, inverter-controlled modulating systems, said Silberstein.

“Attempting to charge systems without using the appropriate superheat and/or subcooling methods will undoubtedly result in improperly charged systems,” he said. “The bottom line is that in order to properly charge air conditioning systems, technicians must rely on manufacturers’ guidelines and proven air conditioning theories while avoiding the use of rules of thumb.”