There have been numerous studies that have shown regular maintenance extends the life of HVAC equipment, and chillers are no exception to that rule. But unfortunately, many building owners and facility managers defer maintenance due to budgetary constraints or other reasons, which can lead to performance issues later down the road. In fact, according to Allen Irvine, vice president of service division, Thermal Concepts, Davie, Florida, the biggest cause for chiller failure in south Florida is maintenance deferment.

“We have a lot of older chillers in Miami because air conditioning has been around a long time in Florida,” Irvine said. “And, because of the economy recessions back in the mid-2000s, there was a lot of maintenance deferred. Stuff like vibration analysis, eddy current analysis, and 10-year overhauls were not completed. Manufacturers recommend a complete tear down be performed at the 10-year life mark of either high- or low-pressure machines. You go through and replace bearings, gaskets, and rework the veins.

“In south Florida, we have high run hours,” he continued. “It’s air conditioning season almost every day of the year here. So a 10-year overhaul is important. And when they say 10 years, they’re really talking about 80,000 hours of run time. So up north or to the west, they can defer the 10-year overhaul to 15 years or so.”

“The chiller is probably the No. 1 energy user in the building. If you maintain the chiller properly, it will run efficiently for its life expectancy, which, according to ASHRAE, is 23 to 25 years on a water-cooled chiller, or 15 to 18 years on an air-cooled chiller. If the owner keeps the tubes and the coils clean with regular maintenance every year, they will reduce the energy usage in the building significantly.”

Chillers present a large capital investment, and they are usually located in hard-to-access places, such as the roof of a 55-story building, or down in the basement, Irvine noted. Additionally, the equipment must be totally disassembled to either repair or replace it, and replacement is often very expensive.

“The chiller is probably the No. 1 energy user in the building,” Irvine said. “If you maintain the chiller properly, it will run efficiently for its life expectancy, which, according to ASHRAE, is 23 to 25 years on a water-cooled chiller, or 15 to 18 years on an air-cooled chiller. If the owner keeps the tubes and the coils clean with regular maintenance every year, they will reduce the energy usage in the building significantly.”

Irvine noted one of his clients has a 400-ton chiller that will soon need to be replaced.

In addition to poor maintenance practices, age is another common cause for chiller failure, according to Mike Ditty, general manager of U.S. Heating and Air Conditioning, Longwood, Florida.

However, failure is preventable with a good maintenance program, which includes eddy current testing and ohming the motors on a regular basis, he said.

“Chillers have many moving parts and are expensive; they are also usually the only form of cooling for a large building,” Ditty said. “Without good maintenance from properly trained service techs, chillers will fail, and when they do, it is usually a very expensive fix. Chillers are a large capital investment that, when cared for correctly, will operate for years very efficiently.”

The most common chiller failures that Grand Rapids, Michigan-based Pleune Service. Co. sees are caused by compressor, electrical, or condenser fan motor problems, according to Keith Springstead, assistant service manager for the company. 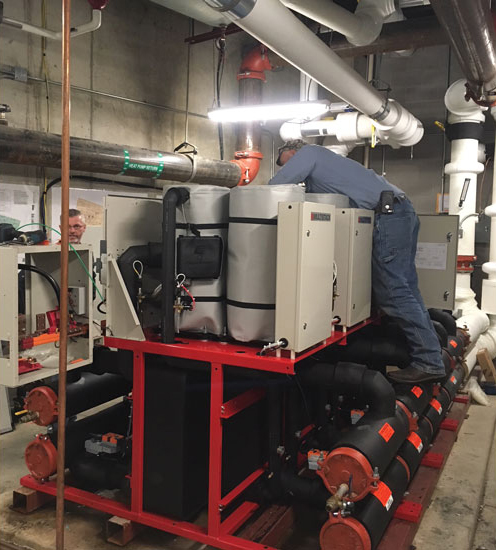 “Compressor failure could be a number of factors, including flow, load, pump, tube failure, or TXV/EEV [thermal expansion valve/electric expansion valve],” he said. “Electrical issues could be caused from wires rubbing the frame, causing a bad reading, or the condenser fan not working. UV light can also cause a breakdown of insulation. The condenser fan motor could fail due to age, a power problem, or contactors.”

“Selecting quality equipment, applying it correctly, and then performing regular maintenance specific to the needs of each unit are critical to obtaining a long and efficient life cycle,” added Ken Misiewicz, CEO, Pleune Service Co. “In commercial environments, we tend to see long life cycles as long as the right product is chosen up front and it is properly maintained. I believe this is because most office spaces don’t significantly change from their original design loads unless there is a major buildout. On the industrial side, we frequently see misapplied chillers [e.g. comfort cooling units applied to a process load, or a 10-ton portable chiller tied to a 4-ton load on a plastic injection machine], poor controls, and inadequate maintenance practices; many are operating in dirty environments. Any of these can result in expensive repairs, degraded efficiency, and unnecessarily short life cycles. Recognizing each chiller, application, and environment is different really means each system should be carefully designed and then cared for with a maintenance program that meets the best long-term interests of the owner.”

“There are many reasons why motors fail, but most are due to power issues or poor winding condition from age of use,” he said. “The next most common culprit is tube failures. The tubes that are used today are much more efficient but have a very thin wall. Poor water quality and lack of maintenance can cause tube failure.”

According to Figueroa, the best way to troubleshoot motor failures is through high resistance testing (megohmmeters), while eddy current testing or a boroscope is how to troubleshoot tube failures.

“Periodic non-destructive motor winding testing and trending provide the best preventive results,” he said. “Eddy current on the tubes should be performed every three years. The best prevention is to be proactive. But in some cases, catastrophic failure cannot be eliminated completely.”

Maintenance is important because it allows contractors to find issues before they become failures, Figueroa continued. Types of predictive maintenance include: vibration analysis, oil analysis, refrigerant analysis, and motor condition testing on an annual basis.

Many HVAC contractors have their own best practices when it comes to providing maintenance services for their chiller customers. U.S. Heating and Air Conditioning recommends water treatment, regular pump maintenance, and an annual tear down and cleaning, to name a few, Ditty said. 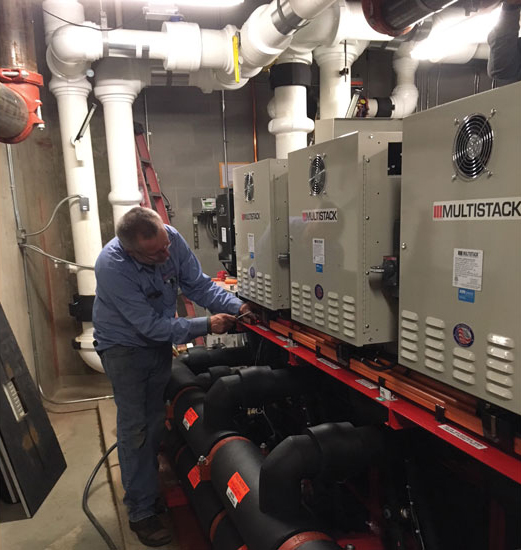 Springstead recommends annually cleaning the condenser and evaporator, checking oil level and taking an oil sample, performing a vibration check, as well as checking the Meg compressor and condenser fans. Quarterly checks should include pumps and strainers flow, refrigerant charge, voltage, and transducer versus gauge pressure. Eddy current testing should be performed on tubes every five years, he added.

“Proactive testing and verification is important,” Figueroa said. “This will include oil, vibration, and refrigerant analysis, testing of motor windings, and eddy current testing. Checking all operating pressures, temperatures, voltages, and amperages and comparing to the factory specifications or original design data is also required to identify a chiller’s current operating state. All are used for verification of a chiller’s performance and condition, which then can be used for corrective actions if needed.”

Irvine tells clients his best practices for chiller maintenance are to simply perform all the diagnostics when recommended.

“We used to use the OEM recommendations, but they vary from OEM to OEM,” he said. “It’s the same thing with cars — some people say you should change the oil every 3,000 miles, some say 5,000 miles, and some say 7,000 miles. It just depends on who you listen to. When we would make our recommendations, we had some difficulty with owners because the OEMs recommended different approaches.

“We now use ANSI/ASHRAE/ACCA Standard 180-2012, Standard Practice for Inspection and Maintenance of Commercial HVAC Buildings, because it tells you the minimum amount of maintenance you should do each year on that equipment,” Irvine continued. “It cuts to the chase. And we present this as part of our preventative maintenance offering programs. In other words, we say, ‘This is from the experts in the industry, and we recommend you follow this.’ And most customers like the third-party validation. We also give them options for additional maintenance on top of the minimums. A lot of building property managers only want to do the minimum, so now, we don’t have to debate on what is the minimum. Most owners want to do what they can to have the most efficient machine possible with the longest life.”