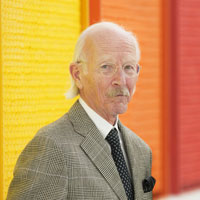 SINDELFINGEN, Germany — Senator h. c. Peter Schaufler, CEO and owner of Bitzer, has passed away at the age of 74. Schaufler managed Bitzer for 36 years and turned the company into the world’s largest independent manufacturer of refrigeration compressors.

Schaufler took charge of Bitzer in 1979 and gave the company an international focus, turning it into an innovative global player in the refrigeration and air conditioning sectors. Today, Bitzer has 3,400 employees in more than 90 countries.

In a press release announcing his passing, Bitzer said, “The Peter Schaufler era was characterized by values such as hard work, ingenuity, and quality, which are now firmly rooted in the Bitzer corporate culture. His forward-looking business policy and his willingness to rise to challenges allowed him to conquer new markets, and to successfully introduce compressor technologies to the market, such as screw compressors in 1983 and scroll compressors in 2002.”

Schaufler was highly committed to the common good throughout his life. The aim of the Schaufler Foundation, which was founded in 2005, was to bring together entrepreneurship, science, research, and art. The Schaufler Foundation is the main sponsor of the Karlsruhe University of Applied Sciences’ Valerius Füner Prize, which recognizes the outstanding achievements of mechanical engineering students in the areas of refrigeration, air conditioning, and environmental technology. The foundation also supports dedicated students at the University of Dresden, the University of Stuttgart, and the Karlsruhe University of Applied Sciences via the German government’s Deutschlandstipendium (Germany Scholarship).

Schaufler also was keen to see the advancement of scientific research in the field of refrigeration and air conditioning technology. In 2007 he created the Bitzer Chair of Refrigeration, Cryogenics and Compressor Technology at the Dresden University of Technology.

In 2010 Schaufler was awarded the Cross of the Order of Merit of the Federal Republic of Germany for his contributions to the fields of culture and science. In addition, he received many awards for his business successes and services to society, including the 2014 Gründerpreis Baden-Württemberg for company founders, in recognition of his life’s work.