This website requires certain cookies to work and uses other cookies to help you have the best experience. By visiting this website, certain cookies have already been set, which you may delete and block. By closing this message or continuing to use our site, you agree to the use of cookies. Visit our updated privacy and cookie policy to learn more.
Home » Precision Announces It Is Moving to HFO Refrigerant Blends for Its Freezers and Blast Chillers
HVAC Contracting 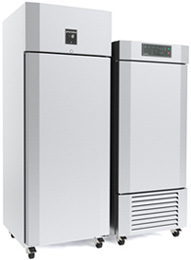 British refrigeration manufacturer Precision has announced that, following extensive testing, it will phase out use of R-404A refrigerant in the next few weeks, and move to the HFO blend R-448A, Honeywell’s Solstice N40, for all its freezer and blast chiller products.

R-404A is the market’s standard refrigerant for freezers and blast chillers, but has a high global warming potential (GWP) of 3,922. The new R-448A refrigerant’s GWP of 1,386 is almost two-thirds lower. It is also non-toxic and non-flammable and more energy efficient than R-404A, the firm noted.

Steve Goldsmith, Precision’s engineering manager, said, “Now that there is a viable alternative, it makes no sense to use R-404A. We are seeing an average of 4 percent energy saving on the cabinets we have tested so far, the biggest gains coming from blast chiller applications.”

Precision and Honeywell are currently testing new HFO refrigerants for general chilled storage, Goldsmith said. “The refrigerator solution, a viable alternative to refrigerant R-134a, will be available in the next few months. R-404A’s very high GWP was the prime driver in tackling it first.”

The move to R-448A is in line with Precision’s commitment to working with new technologies that reduce refrigeration’s impact on the environment, the manufacturer said. For example, the company was the first catering refrigeration manufacturer to use insulation based on vegetable oils rather than petrochemicals.

Nick Williams, Precision’s managing director, said, “We’ve been working closely with Honeywell on HFO refrigerants for over two years. This is an important development — a viable, safe, green, and energy efficient alternative to R-404A. Hopefully more manufacturers will make the switch to R-448A as soon as possible.”

Amazon Announces First ‘No Checkout’ Convenience Store for US in 2017

80-year-old Eaton Williams to Close for Good on Nov. 30